The Importance Of Don 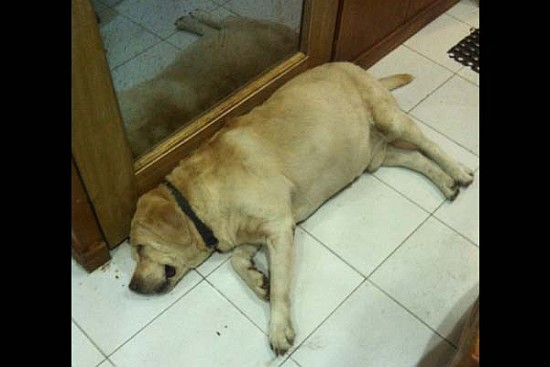 Don was a wanted entity for the Delhi Police. When they got to him, they found him asleep, oblivious to the media circus around him. But who knows how Don feels, as the poor beast cannot speak our tongue.

Yes, Don is a dog. He is Aam Aadmi Party MLA Somnath Bharti's pet pit-bull if you go by what reports would say. The tame looking Labrador that Bharti gave up though, would seem a far cry from the animal that his then-pregnant-wife, Lipika, has alleged to have attacked her while she was being allegedly strangulated by Bharti.

Late last night, Don faced multiple cameras probably for the first time as Bharti led his dog to the Delhi Police. The capital's police force had been very insistent regarding Don's presence for the investigation in the Bharti's matrimonial brawl that has spilled onto our TV screens. Yet again, Don was blissfully unaware of his recently acquired importance.

But Don's plight was not something new.

We on top of the food chain have had shady encounters across history where we have been particularly unkind to fellow animals. The first known case of an animal receiving a taste of our evolving law-and-order situations was when a pig was executed by the French in Fontenay-aux-Roses, a suburb of Paris, as far back as 1266.

That was when we started, and we did not look back.

We then took on the might of insects, bulls, horses, cows, rats and weevils, declaring them agents of Satan and burning them at the stake when we suspected that those foreign-language-speaking creatures were up to no good. Probably one of the first works to address the issue was a book by E.P. Evans. The Criminal Prosecution and Capital Punishment of Animals came out in 1906, and Evans had elucidated our concerns with creature discomforts. "A homicidal pig or bull was not necessarily assumed to be an incarnation of a demon, although it was maintained by eminent authorities…" he wrote.

But do not be scared Don. We have changed. Besides, you have not been accused of homicide and we have not replaced your droopy ears with devil's horns on our TV programming just yet. One more thing that is going for you, you canine, is that we consider you guys to be our 'best friend'.

And we say all of this to comfort you, Don, as we do not think you conspired or meddled too much in the Bhartis' affairs. We think the time for persecuting our animal brethren is past us. All of this, we suspect, is just a ploy by the Delhi Police to recreate Manmohan Desai's Saccha Jhoota from the seventies. While your master Bharti can not be expected to pull off a Rajesh Khanna (let alone the double-role Khanna essays in the movie), you could essay the role of the aptly-named-dog Moti.

And trust us, it will be fun. After all, isn't everyone on TV waiting for a shot at the silver-screen? With a name like Don, you could go far.