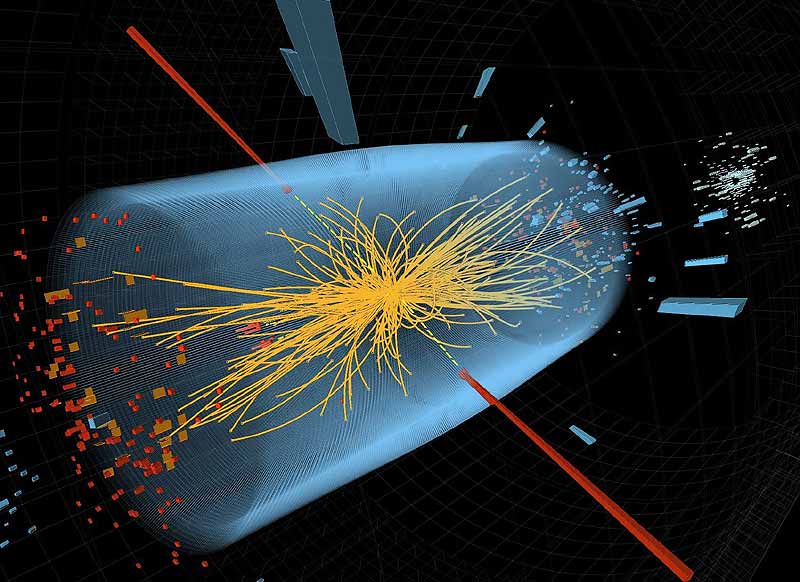 Is the search for the long sought Higgs boson particle, the most elusive so far for the particle physicists, finally over?

“As a layman, I would now say, I think we have it,” said CERN director-general Rolf-Dieter Heuer. “It’s a historic milestone today. I think we can all be proud, all be happy.”

John Ellis,theoretical physicist, answers the question "What is the Higgs boson?" in preparation for the press conference following the seminar on LHC 2012 results on the Higgs boson search at CERN.

At a seminar held at CERN -- the European Organization for Nuclear Research, the world's leading laboratory for particle physics -- as a curtain raiser to the year’s major particle physics conference in Melbourne, the results of ATLAS and CMS experiments, based on data collected in 2011 and 2012, with the 2012 data still under analysis, were announced, reporting a boson that has Higgs-like properties at a mass of 125 gigaelectronvolts (GeV) with a 5-sigma significance, meaning they are 99.999 percent confident of its existence:

“We observe in our data clear signs of a new particle, at the level of 5 sigma, in the mass region around 126 GeV. The outstanding performance of the LHC and ATLAS and the huge efforts of many people have brought us to this exciting stage,” said ATLAS experiment spokesperson Fabiola Gianotti, “but a little more time is needed to prepare these results for publication.”

"The results are preliminary but the 5 sigma signal at around 125 GeV we’re seeing is dramatic. This is indeed a new particle. We know it must be a boson and it’s the heaviest boson ever found,” said CMS experiment spokesperson Joe Incandela. “The implications are very significant and it is precisely for this reason that we must be extremely diligent in all of our studies and cross-checks."

“It’s hard not to get excited by these results,” said CERN Research Director Sergio Bertolucci. “ We stated last year that in 2012 we would either find a new Higgs-like particle or exclude the existence of the Standard Model Higgs. With all the necessary caution, it looks to me that we are at a branching point: the observation of this new particle indicates the path for the future towards a more detailed understanding of what we’re seeing in the data.”

The name Higgs Boson came from a British scientist Peter Higgs and Satyendra Nath Bose, who worked with Albert Einstein in the 1920s, and had studied at Presidency College, Calcutta. The work done by Bose and Albert Einstein, later added by Higgs, led to this pioneering day.

Paolo Giubellino, spokesperson of CERN said that "India is like a historic father of the project."  A large number of Indian scientists, representing the Saha Institute of Nuclear Physics(SINP), Kolkata, Tata Institute of Fundamental Research, Mumbai, Harishchandra Research Institute, Allahabad and Institute of Physics, Bhubaneswar, were involved in the world's most ambitious experiment over the years. Read more about the Indian Angle here and here

The Higgs boson, or the 'God particle' as it has come to be called was once described in a 1993 research paper as the 'Goddamn particle'  by Nobel winning physicist Leon Lederman because it had proved so elusive and hard to isolate. That was changed by an editor to the “God” particle to make it more palatable, and the name has remained stuck.

Soundbytes from the interviews to Peter Higgs, Francois Englert, Carl Hagen and Gerald Guralnik, recorded at CERN on the announcement of the latest results from ATLAS and CMS on the Higgs boson searches.

The CERN press-release went on to say:

The next step will be to determine the precise nature of the particle and its significance for our understanding of the universe. Are its properties as expected for the long-sought Higgs boson, the final missing ingredient in the Standard Model of particle physics? Or is it something more exotic? The Standard Model describes the fundamental particles from which we, and every visible thing in the universe, are made, and the forces acting between them. All the matter that we can see, however, appears to be no more than about 4% of the total. A more exotic version of the Higgs particle could be a bridge to understanding the 96% of the universe that remains obscure.

“We have reached a milestone in our understanding of nature,” said CERN Director General Rolf Heuer. “The discovery of a particle consistent with the Higgs boson opens the way to more detailed studies, requiring larger statistics, which will pin down the new particle’s properties, and is likely to shed light on other mysteries of our universe.”

Positive identification of the new particle’s characteristics will take considerable time and data. But whatever form the Higgs particle takes, our knowledge of the fundamental structure of matter is about to take a major step forward.