There is something predictable about prickly authors and over-sensitivity to negative reviews. Pankaj Mishra, in recent times, caused the likes of Salman Rushdie, Patrick French and Niall Ferguson to react back in anger. Mihir Sharma's delightful review of India Calling by Anand Giridharadas led to a bit of a kerfuffle on Twitter.  This time, though, it didnt just end in a Twitter meltdown, as is usual nowadays, but also started on it—with Jonathan Shainin, a senior journalist with monthly magazine Caravan, announcing: 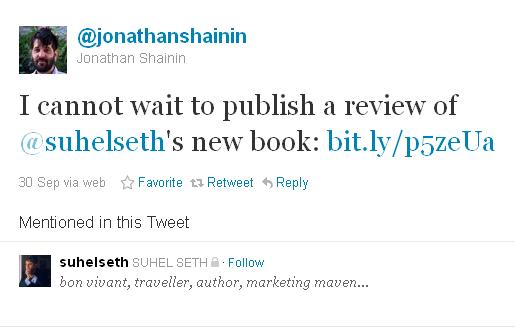 We had to employ the services of Google (the search engine, not to be confused with Mr Seth's dog by the same name, who "can find anything that none of us can"), as Mr Seth's tweets have since been blocked from public, to glean that Mr Seth, whose Twitter page describes him as "bon vivant, traveller, author, marketing maven...", was civility personified and had responded with a courteous: "for sure, you mustn't..."  He also added:

Mr Shainin concluded the exchange with: 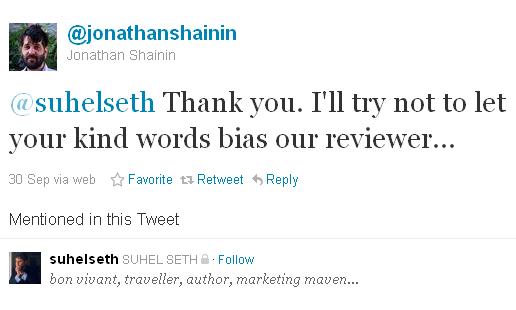 This was September 30, 2011.  The exchange may well be described as the chronicles of a feud foretold.

All was quiet for almost two months. And then yesterday, November 29, the promised review of the book was finally published, which, after a detailed and thorough examination of what it aptly called The Age of Seth, concluded with:

The ultimate irony is that this very book is, in its own way, also a casualty of the era its author defines. After all, Seth the writer comes across as good-natured, thoughtful, loyal, even kind. Nor are his rules for friendships anything but sensible. Yet, as we have seen, it is impossible to read the book without considering the world whose values it reflects—a context that fatally undermines all its pretensions to virtue. What good are loyalty and friendship if their true purpose is advancement?

There is nothing inherently contemptible in the much-sanctified claim that goodness will be good for you. But there is a fine line between self-help and self-serving, and this book can’t seem to stay on the right side of it. It wants to teach you how to make friends, but it keeps on telling you how to find clients.

Seth says his most important rule is: “Don’t make clients out of friends. But make friends out of clients.” Yet Suhel is friends with “almost everyone there is to know in the country”, or so the book’s jacket informs us. This may finally provide the explanation for why Get to the Top exists: he’s made friends at such a phenomenal rate that he must be running out of clients.

The news of the review having been published was also duly announced on Twitter:

As the news of the arson spread like, well, wildfire, the reactions on Twitter were swift and categorical, some even calling it an "execution."

The next thing we saw was a tweet from one of the protagonists: 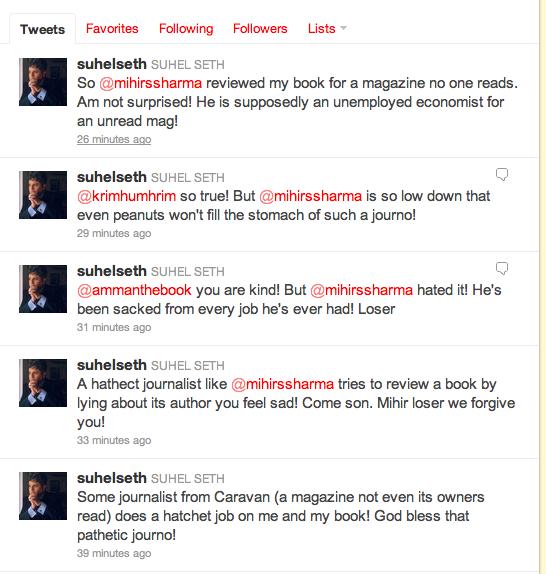 For the record, Mr Mihir Sharma is a Harvard-educated economist who worked as a journalist till recently with the Indian Express, and has since moved to the Business Standard. On Caravan, as earlier noted, Mr Seth's views are as follows: 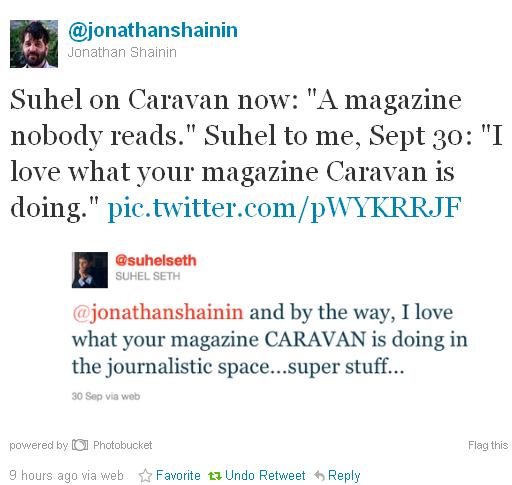 We are unable to predict whether or not this controversy would help Mr Seth's book get to the top. Perhaps there is a new rule in there somewhere waiting to be formulated with the combined wisdom of the likes of M/s Shashi Tharoor, Lalit Modi and Omar Abdullah...

We should note that earlier this month Mr Seth had been sued by ITC for over Rs 200 crores for similarly enraged and incoherent tweets.

Mr Seth had then tweeted that his “account is being constantly hacked into ... some of the tweets ascribed to me, sadly are not mine."