The Curse Of The Indian Nobel 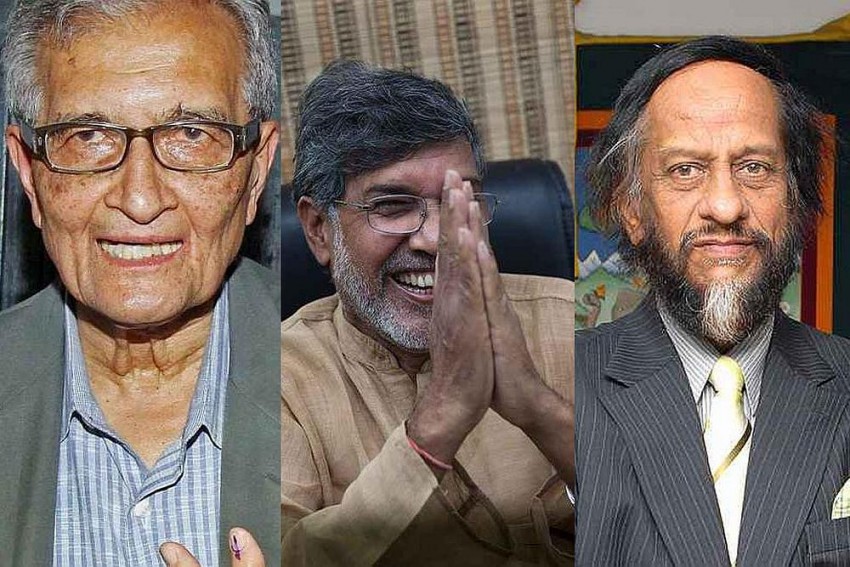 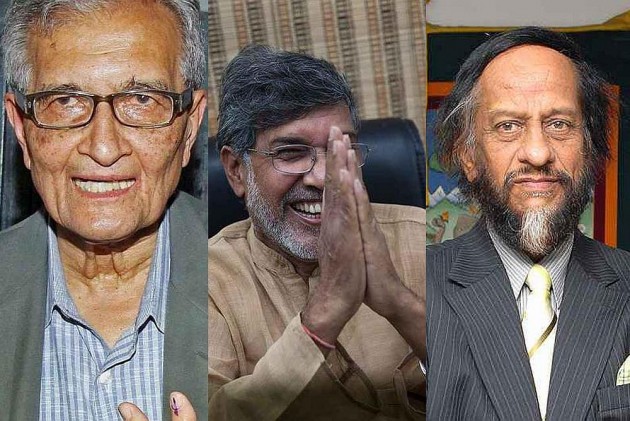 The reputation of Kailash Satyarthi and R K Pachauri is hanging on a string, while Amartya Sen's career as Chancellor remains suspended in a mesh of messy political whims.

Reason why their lives are in doldrums? The answer is pretty predictable -- money, sex and politics.

It all started with Kailash Satyarthi, the latest addition to India's Nobel hall of fame.

Vital records of a charitable trust (Mukti Pratisthan Trust), which along with one of its trustees Nobel laureate Kailash Satyarthi and some others is embroiled in a suit relating to alleged misappropriation of funds, have gone missing, a Delhi court has been informed.

When the court was informed about it, the judge said it would not be possible for the receiver to complete the entire report. She asked the plaintiffs, including another trustee Sheo Taj Singh, and defendants Satyarthi and Sumedha to inform the court about the place where the post-1987 records had been kept.

The court passed the direction while hearing the civil suit which alleged that the plaintiffs had come to know about embezzlement of huge sums of money belonging to the trust and expropriation of huge amounts by maintaining false accounts.

The plaint alleged that when Singh conducted an inquiry into the affairs and accounts of the trust, he came to know that "major part of the trust funds, running into huge sums of money has been spent by the defendant trustees (Satyarthi and his wife) either on foreign trips and other luxuries or have been embezzled by way of falsification of accounts".

Next came The Energy and Resources Institute (TERI) chief R K Pachauri, who received the Nobel in 2007 on behalf of an international panel on climate change. One of his junior employees at TERI lodged a complaint against him for sexual harassment and the Economic Time was the first to report. The report which has been removed from the ET website says:

The complainant, who works as a research-analyst at the New Delhi-based energy think tank, has cited unwanted physical advances besides being the recipient of SMS and WhatsApp messaging, emails and a handwritten note with dates and time that began soon after she joined TERI in September 2013.

According to the complainant:

On many occasions, against my wishes and despite knowing that I am totally against any such behaviour/act, Dr Pachauri has forcibly grabbed my body by hugging me, holding my hands, forcibly kissing me and touching my body in an inappropriate manner.

Amartya Sen, before the 2014 Lok Sabha Elections in which the Modi wave swept over India, declared that he doesn't want Modi as his prime minister.

The Hindu carried a PTI report:

"Yes, I don’t want him," Dr. Sen told CNN-IBN in reply to a question on whether he wanted him as his prime minister.

"As an Indian citizen I don’t want Modi as my PM... He has not done enough to make minorities feel safe," he said.

On being asked why he did not want so, Dr. Sen said, "He could have first of all been more secular and he could have made the minority community feel more secure."

Amartya Sen seems to feel like it's pay back time. Recently, Sen withdrew his candidature for a second term as Nalanda University Chancellor, saying the Narendra Modi government does not want him to continue in the chair.

In a letter addressed to his colleagues, Sen wrote:

Non-action (by government) is a time-wasting way of reversing a board decision, when the government has, in principle, the power to act or not act...It is hard for me not to conclude that the government wants me to cease being the chancellor of Nalanda University after July, and technically, it has the power to do so.

This delay, as well as the uncertainty involved, is leading, in effect, to a decisional gap, which is not helpful to Nalanda University's governance and its academic progress.

I have, therefore, decided that in the best interest of Nalanda University, I should exclude myself from being considered for continuing as chancellor beyond this July, despite the unanimous recommendation and urging of the governing board for me to continue...Even though the Nalanda University Act, passed by Parliament, did not, I believe, envisage political interference in academic matters, it is formally the case -- given the legal provisions (some of them surviving from colonial days) -- that the government can turn an academic issue into a matter of political dispensation if it feels unrestrained about interfering.