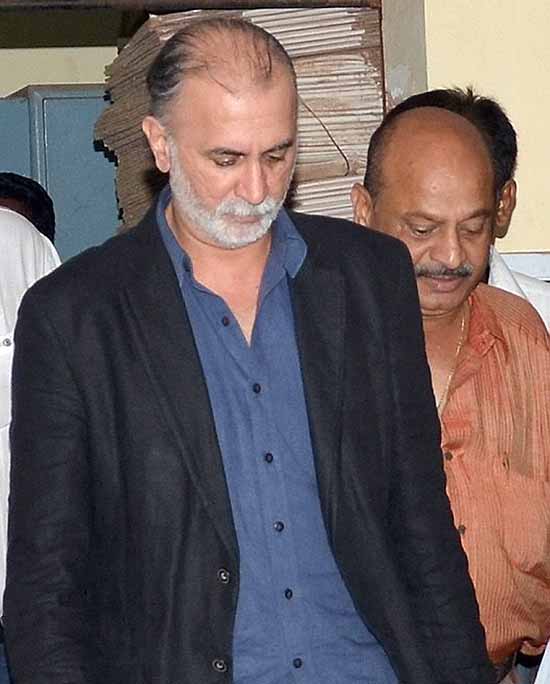 The former Tehelka journalist -- who had accused the weekly magazine's editor in chief, Tarun Tejpal, of sexually molesting her on two occasions, the 7th and 8th of November 2013 at the magazine's annual Think festival in Goa -- has complained to the Goa Police that her former employer and his family are deliberately revealing her identity with the aim of harassing and intimidating her.

Although a campaign targeting the young woman's character has been on for the last two months in Delhi, the immediate provocation for the complaint was an email that several people received on Tuesday, January 28, on the grounds that it was aimed at revealing her identity and intimidating her. The complainant wrote:

"I have remained silent against this campaign of slander and vilification, although it has caused me hurt and trauma, because I have faith in the legal process and respect its sanctity”

The email included a photograph of the young journalist -- her eyes covered by a black strip, but leaving her fully identifiable -- which bears a descriptor saying: "The Day After" Nov 9 Goa, and has a caption saying:

Here is the 'Victim' getting cozy with her 'RAPIST' on the VERY NEXT DAY AFTER TWO ALLEGED 'ASSAULTS'!

"Please spread the message and expose her lies."

The complainant points out:

"This email clearly discloses my identity and seeks to deny me the protection granted by law, by encouraging a wide dissemination of the contents of the same."

The complainant alleges that she has been subjected to "a systematic and virulent campaign to falsify facts and the truth." Her complaint goes on to say:

In the past two months, I have been informed by several senior editors and journalists that my photographs, false stories about my life and a total obfuscation of the official conversations I had with senior Tehelka editors after I made the  complaint, are in wide circulation."

The complaint also explains the circumstances under which the photograph was taken during Think, a literary and cultural festival associated with Tehelka, where she had been assigned the task of chaperoning the Hollywood actor Robert De Niro.

According to her complaint, "As Mr [Robert] De Niro's chaperone, I was directed by Mr Tejpal and other staffers to come forward and have this photograph taken" at the green room of the hotel, with between 40 to 50 people present while the actor waited for his session to start. This was one of the many photographs taken by Tehelka photographers of the actor surrounded by fans and Tehelka staffers present, according to the complainant.

The complainant points out that the photograph, "which was available on the Tehelka server has been circulated, illegally and without my consent, via email to several members of society, including senior media persons. It is being presented completely out of context, along with several malicious comments about my 'appearance' and the veracity of my complaint."

“We categorically deny these allegations,” Tarun Tejpal’ daughter said. “They are in the same malicious vein as the false intimidation charges levelled against us previously. Intimidation charges gravely damage our chances for bail.”

"a member of Mr. Tejpal’s immediate family came to my mother’s house in New Delhi, asking my mother to protect Mr. Tejpal and demanded to know...what I "wanted"

The complaint now comes soon after Goa Police investigating officer Sunita Sawant, who is investigating the sexual assault case, also claimed she was being threatened by Tejpal during the course of the inquiry.

Tejpal was recently denied bail after Sawant filed a complaint of intimidation before a magistrate. Tejpal’s judicial custody was extended by 14 days by the magistrate’s court on Tuesday, January 28.

Tejpal has denied the charges, saying he was shocked at the allegation levelled by Sawant and that these " allegations have reinforced my fear that I cannot expect an unprejudiced and fair investigation."