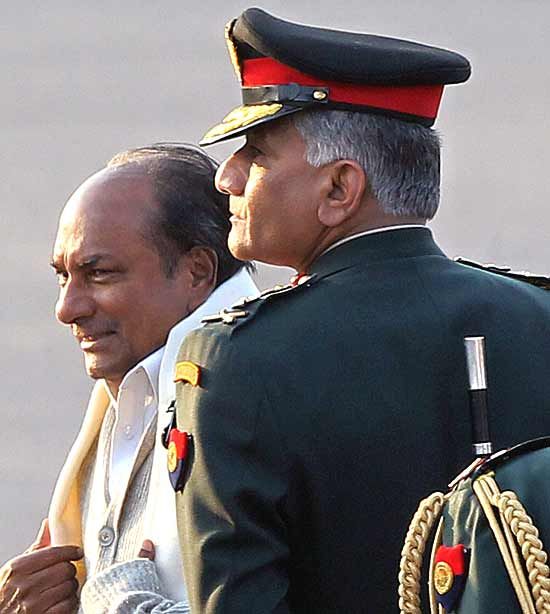 It started with an interview to the Hindu, published on March 26, 2012, with Army Chief, General V.K. Singh alleging he was offered a bribe of Rs. 14 crore and that he had told the defence ministry about it:

The General said the lobbyist offered him the bribe in order to have a tranche of 600 sub-standard vehicles of a particular make cleared for purchase. He said the vehicles, 7,000 of which were already in use in the Army, had been sold over the years at exorbitant prices with no questions asked. He said there was no proper facility where they could be serviced and maintained and yet they continued to be sold to the Army: “Just imagine, one of these men had the gumption to walk up to me and tell me that if I cleared the tranche, he would give me Rs. 14 crore. He was offering a bribe to me, to the Army Chief. He told me that people had taken money before me and they will take money after me.”

The Army chief said the brazenness of the act shocked him out of his wits. “I was shocked. If somebody comes and tells you, you will get so much, what can you do?” He said the man had recently retired from the Army, indicating how deeply entrenched the problem was.

The General said he went straight to Mr. Antony and reported the matter. “I told him, if you think I'm a misfit, I will walk out.” ...

The paper also quoted Gen Singh as saying he felt he was targeted on his date of birth because he had cracked down on corruption:

All kinds of interests are involved. Suddenly there was a blitz in the media and papers began to float around. Where did they come from? When you put your foot down and insist you want to institute good practices in the system, when you don't allow people to take the organisation for a ride, some people are going to be sidelined. This is one method of hitting back.

There is the Adarsh lobby, there are various lobbies of equipment dealers who realised we were not going to accept bad quality equipment....

Some are serving, some have retired. FIRs have been filed against some of these people. You will see in the coming months that things will slowly unravel. As time passes, we will know who the sutradhar of this drama is. I will come to know and so will you.

The General before that had also given an interview to Chauthi Duniya (click here for the full interview) on March 17 where he had made the charge that he repeated to the Hindu but had said that perhaps no action was taken because the bribe was offered in an indirect way:

The defence minister on his part told the Rajya Sabha:

More than a year ago I don’t exactly remember the date, I am sure it was more than a year ago; the Army record has got the exact date during one of his meetings with me, the Army Chief told me about this incident. He told me that one General I think, Tejinder Singh met him and offered him crores of rupees bribe. I was shocked. I sat like that for a minute. Then, I told him, “Take action”. But he told me, “I don’t want to proceed with it”. I don’t know why. He said, “I don’t want to proceed with it”, at that time. After that he did not give any written complaint to me or to the Defence Department or to the Department of Defence Production.

The controversial trucks have been in use in the Army from 1986 onwards and during the time of so many Governments. If at all there was any complaint, he could have given a written complaint to me or to the Department. He did not give any complaint to me. My practice in the Defence Ministry, after I took charge, is that if I receive any written complaint or even any anonymous letter, I used to ask the Department to make an inquiry. I have not received any written complaint so as to enable me to act. But, yesterday, when it came in the newspaper, The Hindu, in the morning, I read that. Immediately I contacted the Defence Secretary and asked him to just see it and then take action. He asked me, “What action?” I said, “I would like to have a CBI inquiry. It is good”. I was in the Parliament because I had to attend the Question Hour in the Lok Sabha. But because of noise the Question Hour could not be conducted. Immediately I went to the office. There was only a newspaper report. I have not received any written complaint from anybody. Though this was a report, since this allegation was made by the Army Chief, immediately I wrote, “a comprehensive CBI inquiry should be conducted”. I asked the Defence Secretary to immediately order this. He went to the CBI and now they are inquiring into it. Let them inquire into everything. This was the action I took.

The controversy, however, clearly should be about the trucks that are at the centre of this debate. The following facts seem clear on the basis of articles by Nitin Gokhle, Praveen Swami, Ajai Shukla and in the New Indian Express:

As for the alleged bribe-offerer, earlier, in the Sunday Guardian, Madhav Nalapat tried to address  Who is Lt-Gen Tejinder Singh?

One source said that Tejinder Singh "operates in tandem with a Major Hooda (retd) and his son, both of whom are well known to Karthik Chidambaram,the influential son of Home Minister P Chidambaram". The younger Hooda, a presumed relative of the Haryana Chief Minister, is alleged to be "active in promoting the products of certain agencies, including foreign entities". These sources claim that Tejinder Singh was very close to a former Chief of Army Staff and that he "knows the incoming Chief of Army Staff,Lt-General Bikramjit Singh, very well". None of these claims could be verified,especially suggestions that a such link "could influence procurement decisions by the Army in the future". General V K Singh is known to have had a series of battles with established cartels involved in military procurement,unlike some of his predecessors,who "played along with such elements". That the incoming Chief of Army Staff has very powerful support within the UPA was made clear by the government's decision to announce that he would succeed General V K Singh,even if the latter were to quit prematurely. It needs to be said that Lt-General Bikramjit Singh is widely regarded as a capable officer,with an excellent record in counter-insurgency operations.

To top it all, as Arun Agrawal points out in the Canary Trap, Ravinder Kumar Rishi, the chief scamster in the deal, was not only swindling the Indian government but also the Czech government. A criminal case was filed against him in the country where Tatra trucks were manufactured almost a year back for the supplies made to India as revealed in a Czhec website: Tatra faces tunneling and tax evasion allegations

The question to be answered is this: If a criminal complaint was filed against the company and Ravinder Kumar Rishi by the Czech republic for merely causing a loss of 10% on profits foregone due to under invoicing a year back, then what action did the defence Minister take against Vectra whch as a middleman had supplied trucks at more than 100%  the amount for which Tatra sold in the open market? This scam was going on for the past ten years.

I will bet top dollar that the anonymous plaintiff referred to in the article is an Indian source who had no faith in the Indian system to act and therefore chose to go through the head of Transparency International. Could it be the good General  or a source close to him? Your guess is as good as mine.

It is difficult to believe that the Czech authorities did not correspond with the Indian government within the past one year. They do have an embassy in India. Where are the records of the correspondence?

The General was made to pay the price for his anti-corruption crusade in the Sukna land scam and the Adarsh Society scam, including the court marshaling of  Lt. Gen. Avadesh Prakash, who was Military Secretary under General Deepak Kapoor.

It is time that Mr Anthony realizes his mistake. He is e surrounded by corrupt people who are using his reputation as a shield.

What is at stake is the loss of faith of the people in honest ministers. Manmohan Singh and then Mr Anthony. What good is the virtue of honesty? Is there any hope of redemption left for the country?

The General will go in a blaze of glory but the Minister will not.

And for those who are aligned with the arms mafia and ask for the reason as to why the General did not take action on the Tatra scam? Against whom would he take action? Procurement of defence equipment is not under his charge. Did you expect him to take on the retired generals and ex-Chiefs who were paid off for signing the document that he refused to sign? Would there be any proof? Where would that get him? Would you take on a ex-defence Minister or a corrupt Minister in the Cabinet? Was the issue of Bofors pursued by the Army Chief?

And of course now we suddenly have a new controversy over a leaked letter.