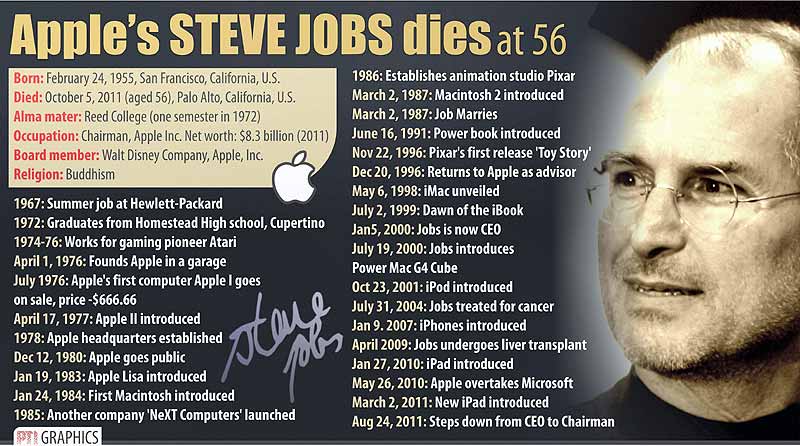 Michelle and I are saddened to learn of the passing of Steve Jobs. Steve was among the greatest of American innovators - brave enough to think differently, bold enough to believe he could change the world, and talented enough to do it.

By building one of the planet’s most successful companies from his garage, he exemplified the spirit of American ingenuity.  By making computers personal and putting the internet in our pockets, he made the information revolution not only accessible, but intuitive and fun.  And by turning his talents to storytelling, he has brought joy to millions of children and grownups alike. Steve was fond of saying that he lived every day like it was his last.  Because he did, he transformed our lives, redefined entire industries, and achieved one of the rarest feats in human history: he changed the way each of us sees the world.

The world has lost a visionary. And there may be no greater tribute to Steve’s success than the fact that much of the world learned of his passing on a device he invented. Michelle and I send our thoughts and prayers to Steve’s wife Laurene, his family, and all those who loved him .

For our fifth D conference, both Steve and his longtime rival, the brilliant Bill Gates, surprisingly agreed to a joint appearance, their first extended onstage joint interview ever. But it almost got derailed.

Earlier in the day, before Gates arrived, I did a solo onstage interview with Jobs, and asked him what it was like to be a major Windows developer, since Apple’s iTunes program was by then installed on hundreds of millions of Windows PCs.

He quipped: “It’s like giving a glass of ice water to someone in Hell.” When Gates later arrived and heard about the comment, he was, naturally, enraged, because my partner Kara Swisher and I had assured both men that we hoped to keep the joint session on a high plane.

In a pre-interview meeting, Gates said to Jobs: “So I guess I’m the representative from Hell.” Jobs merely handed Gates a cold bottle of water he was carrying. The tension was broken, and the interview was a triumph, with both men acting like statesmen. When it was over, the audience rose in a standing ovation, some of them in tears.

Art by Jonathan Mak (via Tom Davenport, via curiositycounts and many others): 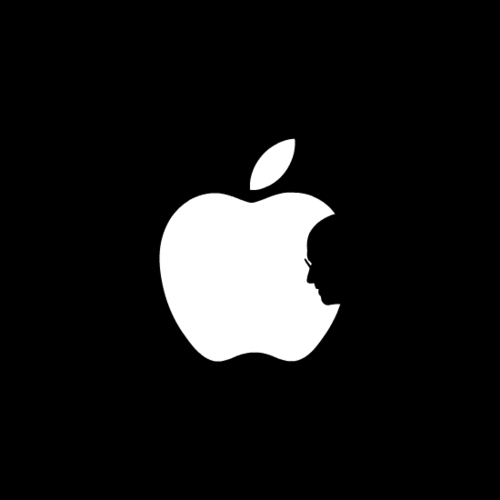 Jobs was born in San Francisco on Feb. 24, 1955, to Joanne Carole Schieble and Syrian immigrant Abdulfattah Jandali, unmarried University of Wisconsin graduate students who put him up for adoption. He was adopted by Paul Jobs, a high school dropout who sold used cars and worked as a machinist, and his wife, Clara.

Jobs' willfulness and chutzpah were evident early on. At 11, he decided he didn't like his rowdy and chaotic middle school in Mountain View, Calif., and refused to go back. His family moved to a nearby town so he could attend another school.

When he was 12 or 13, Jobs would recall, he called the home of William Hewlett, one of the founders of Hewlett-Packard Co., to ask about parts he needed for a device he was building. For Jobs, it led to a humble summer job on a Hewlett-Packard assembly line, which he compared to being "in heaven."

While attending Homestead High School in Cupertino, Calif., Jobs met Steve Wozniak, who was nearly five years older. A technical wizard who was in and out of college, Wozniak liked to make machines to show off to other tinkerers.

The two collaborated on a series of pranks and built and sold "blue boxes" — devices that enabled users to hijack phone lines and make free — and illegal — calls.

In 1972, Jobs dropped out of Reed College in Oregon after six months but lingered on campus, sleeping on friends' dorm-room floors. He sat in on classes that interested him, such as calligraphy, which later inspired him to offer Macintosh users multiple fonts, a feature that would become a fixture of personal computing.

He worked sporadically as an electronics technician at video game maker Atari Inc., traveled to India on a quest for enlightenment and found guidance from a Zen Buddhist master.

Meanwhile, Wozniak had created a computer circuit board he was showing off to a group of Silicon Valley computer hobbyists. Jobs saw the device's potential for broad appeal and persuaded Wozniak to leave his engineering job so they could design computers themselves.

In April 1976, the two launched Apple Computer out of Jobs' parents' garage, reproducing Wozniak's circuit board as their first product.

Jobs was born in San Francisco and was adopted by Paul and Clara Jobs (née Hagopian) of Mountain View, California, who named him Steven Paul. Paul and Clara later adopted a daughter, whom they named Patti. Jobs' biological parents – Abdulfattah John Jandali, a Syrian Muslim[31] graduate student from Homs who later became a political science professor, and Joanne Simpson (née Schieble), an American graduate student who went on to become a speech language pathologist  – eventually married. Together, they gave birth to and raised Jobs' biological sister, novelist Mona Simpson.

Jobs attended Cupertino Junior High and Homestead High School in Cupertino, California. He frequented after-school lectures at the Hewlett-Packard Company in Palo Alto, California and was later hired there, working with Steve Wozniak as a summer employee. Following high school graduation in 1972, Jobs enrolled at Reed College in Portland, Oregon. Although he dropped out after only one semester, he continued auditing classes at Reed, while sleeping on the floor in friends' rooms, returning Coke bottles for food money, and getting weekly free meals at the local Hare Krishna temple. Jobs later said, "If I had never dropped in on that single calligraphy course in college, the Mac would have never had multiple typefaces or proportionally spaced fonts."

In autumn 1974, Jobs returned to California and began attending meetings of the Homebrew Computer Club with Wozniak. He took a job as a technician at Atari, a manufacturer of popular video games, with the primary intent of saving money for a spiritual retreat to India.

Jobs then traveled to India to visit the Neem Karoli Baba at his Kainchi Ashram with a Reed College friend (and, later, the first Apple employee), Daniel Kottke, in search of spiritual enlightenment. He came back a Buddhist with his head shaved and wearing traditional Indian clothing. During this time, Jobs experimented with psychedelics, calling his LSD experiences "one of the two or three most important things [he had] done in [his] life". He has said that people around him who did not share his countercultural roots could not fully relate to his thinking.

Jobs returned to his previous job at Atari and was given the task of creating a circuit board for the game Breakout. According to Atari founder Nolan Bushnell, Atari had offered $100 for each chip that was eliminated in the machine. Jobs had little interest or knowledge in circuit board design and made a deal with Wozniak to split the bonus evenly between them if Wozniak could minimize the number of chips. Much to the amazement of Atari, Wozniak reduced the number of chips by 50, a design so tight that it was impossible to reproduce on an assembly line. At the time, Jobs told Wozniak that Atari had only given them $700 (instead of the actual $5000) and that Wozniak's share was thus $350.

While he was at Atari, Steve asked his boss to fund a trip to India for him. Atari did pay his trip up to Germany, where he had to work on fixing some Atari machines. Then Steve was joined by his hippie friend from Reed, Dan Kottke, and they went to India in search for enlightenment. They came back pretty disappointed, especially after they met a famous guru, Kairolie Baba, who, unlike what they expected, was a con man.

We weren’t going to find a place where we could go for a month to be enlightened. It was one of the first times that I started to realize that maybe Thomas Edison did a lot more to improve the world than Karl Marx and Neem Kairolie Baba put together.

When Steve came back, he resumed his job at Atari. One of his pastimes back then included primal scream therapy sessions at the Los Altos Zen Center, where he befriended Governor Jerry Brown and his guru Kobun Chino. He also spent several weeks with his girlfriend Chris-Ann and Dan Kottke in a hippie commune in Oregon, the All-One Farm. Here they would cultivate apples and for some time, Steve would eat only that — when he wasn’t fasting, that is.

Not a lot is known about Steve Jobs' 1974 trip to India but a few obscure details of the trip have been published for public consumption.

The precursor to the India pilgrimage dates back to 1972 when Jobs entered Reed College, a private humanities school in Portland, Oregon. Jobs, being from a middle-class background, had trouble fitting in to the affluent school and though he was a voracious philosophy student with a keen interest in religion, he dropped out after just one semester.

The 1960s had come and gone and Jobs had essentially missed it. Deeply philosophical, Jobs was determined to study and experience, first-hand, the last vestiges of spiritualism and existentialism from that recently bygone era. Because he had developed a keen interest in the 60s spiritual subculture, Jobs remained on the Reed campus for another year to enable himself to experience as much as he could, even though he no was longer officially attending a program there, although he did take a number of courses on religion and for a time he managed one of their dorms.

After about a year Jobs returned to Silicon Valley in 1974 and took a job with a young video game company, Atari. He saved his money intent on taking a spiritual retreat to India to further his understanding of philosophy, religion and life and expand on what he had learned from the waning 1960s culture at Reed.

That same year, when Jobs was 19 years old, he set off to India with Reed College friend, Dan Kottke, with whom he shared his interests in Eastern religions and mysticism, to visit the Kanchi ashram and Neem Karoli Baba, a popular Indian holy man, to study under the master in hopes of learning something more about life.

Unfortunately when they arrived they learned that Baba had died and that they had missed yet another opportunity forever. According to Paul Freiberger and Michael Swaine's book, "Fire in the Valley: The making of the personal computer" the two "drifted around India, reading and talking about philosophy" (p. 261). Kottke later described the journey as a "kind of an ascetic pilgrimage" except we didn't know where we were going."

It seems the pair were only seeking spiritual solace and enlightenment (with a shaved heads and a backpacks). Not long after their arrival, Kottke decided to attend a meditation retreat for a month. Jobs didn't go with him, but rather wandered the subcontinent for a few months before returning to California, and Atari, in the autumn of 1974.

Google has put rivalries aside to pay tribute to Steve Jobs on its homepage. Under the company’s trademark search box, a message simply reads: “Steve Jobs, 1955-2011,” and links to Apple’s homepage.

Mr Modi's Troubles With The Family