3TC, with its strong multi-racial support to the Black Lives Matter movement, marked the resumption of cricket in a country as racially segregated as South Africa 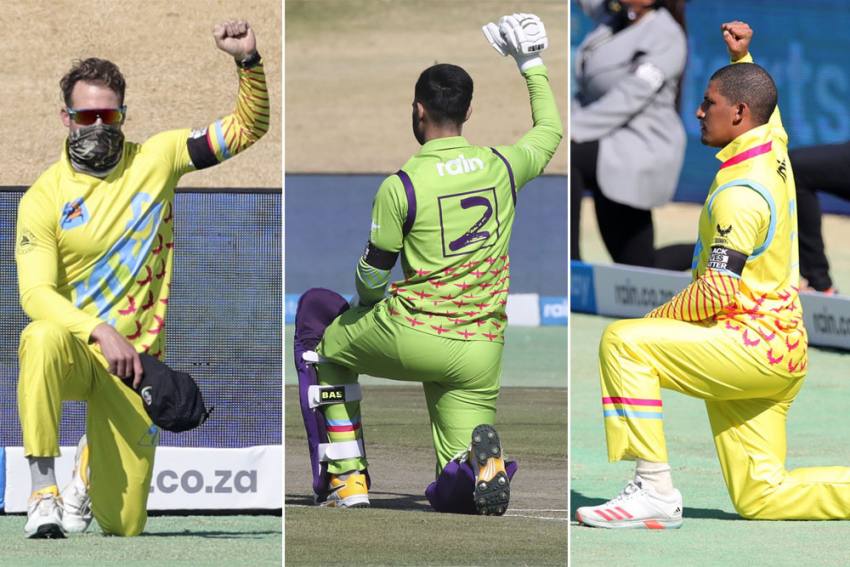 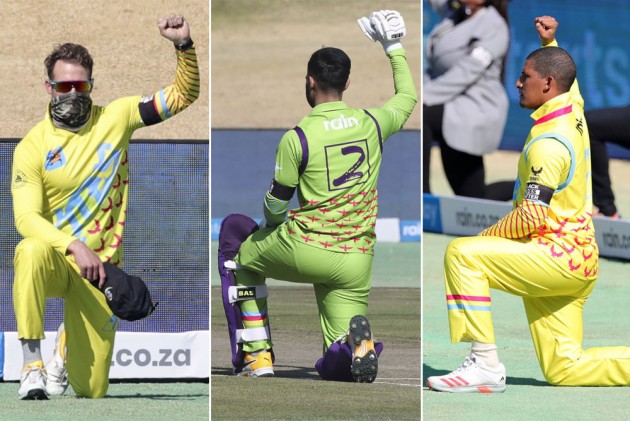 The Black Lives Matter (BLM) movement continues to resonate across the cricket world in a heart-warming way as more and more players and official cricket bodies continue to come out in its support.

After England and the West Indies players took the knee prior to the start of the first Test match and Michael Holding's impassioned plea to "educate the world," cricketers continue to lend overwhelming support to the fight against racism that has gripped the world after African-American George Floyd's death in the United States.

READ: The Sheer Joy And Mass Appeal Of Club Cricket

On Saturday, it was the turn of cricketers from a nation that is still deeply divided on racial lines, South Africa, to lend their support to the movement by wearing black armbands and taking the knee ahead of the inaugural 3Team Cricket (3TC) Solidarity Cup exhibition game.

The Solidarity Cup saw 24 of South Africa's top cricketers feature in three teams -- The Eagles, Kingfishers and The Kites -- playing two halves in a single match. The 3TC match marked the return of the elite level sport to South Africa for the first time since March this year. This match was put together to raise funds for the Hardship Fund, a Cricket South
Africa project aimed at providing relief to those affected by COVID-19, within the cricket industry.

The Cricketing community of the Rainbow Nation had gone through an emotional and soul searching fortnight prior to this after Lungi Ngidi first declared that he would be in favour of his team-mates "making a stand" like many others around the world since the BLM movement first caught the public imagination.

READ: Cricket Faces Saliva Test But What A Joy To See It’s Back Again, Almost!

But since then, Ngidi has gone on to receive plenty of support, particularly after the moving Holding and Ebony-Jewel Rainford-Brent documentary on Sky Sports before the first Test match between England and West Indies.

Clearly, it was more than just symbolism this time as evinced by the participation of the England players in the protest ahead of the First Test.

Several players, both black and white, spoke out openly for the first time on issues of racial discrimination. 31 former players of colour, including Makhaya Ntini, Vernon Philander, JP Duminy and Ashwell Prince, and five coaches, made an unprecedented joint statement, while Hashim Amla issued an independent statement on Instagram the following day.

In a country where only around 6% of the population is white, generations of young black sportsmen have had to give up their dreams of playing sport professionally or of representing their country, because the ‘Whites Only’ policy practised by the government for many years, precluded this. Or worse, had to suffer what Holding bluntly referred to as ‘the dehumanisation of the black race.’

The world never got to know these talented players because they never had the opportunity to play!

Someone like Basil D’Olivera, who could emigrate to England and successfully went on to play Test cricket for that country, was an exception. Most were not so lucky.

The resultant deep-seated angst born of centuries of deprivation amongst the black community worldwide, was poignantly symbolised recently by a picture that went viral a few months ago, of a group of young African- American Medical students standing in front

of a ruined Louisiana Plantation in the US, where their forefathers had worked as slaves saying “We are our ancestor’s wildest dreams.”

The world had started to feel that enough was enough; and discrimination, racial or otherwise, had no place in our lives in this day and age.

In South Africa, Faf du Plessis, South Africa's Test and T20I captain until February this year, along with Dwaine Pretorius, Rassie van der Dussen, Anrich Nortje and Marizanne Kapp, became the first members of the white Afrikaans cricket community to publicly voice their support for the BLM movement, to counter the criticism of Ngidi by Symcox and others.

They firmly rejected the notion that standing with the movement indicated support for violence. This was unprecedented.

“All lives don’t matter until black lives matter” Faf du Plessis had said on Friday. He acknowledged the fact that South Africa is still hugely divided by racism and that people are surrounded by many injustices that need urgent attention and action to fix them. While his teammate Dwaine Pretorius went on to add that the BLM movement stood for the most basic human right that all people across the world deserve, the right not to be judged or segmented because of his/her colour.

Formally, Cricket South Africa came forward as a body to lend its support to the BLM movement, making an official statement to the effect that it stands for equal opportunity.

So it does seem at this point that BLM has found a positive resonance within the cricketing community of even such a racially divided nation like South Africa and is now all set to finally make a difference to hundreds of black lives that have not mattered till now.

For the record, AB de Villiers led from the front yet again as the Eagles won the inaugural edition of the 3TC Solidarity Cup on Saturday. The skipper's typically cavalier innings and his brilliant century stand with Aiden Markram helped the Eagles secured the gold medal.

De Villiers scored 61 runs from just 24 balls while Markram scored 70 from 33 balls, piling up a team score of 160/4 across the two halves of six overs each that they faced.

But at the end of the day, like in the England-West Indies Test match, the statistics were less important than the fact that the game marked the resumption of cricket in South Africa, lifting the spirits of players and fans alike and generating funds for people in dire need of them.

Even more importantly, it brought players of both black and white communities together on a common platform to raise their collective voice in a resounding message against a historical wrong. It augurs well for the generations to come.