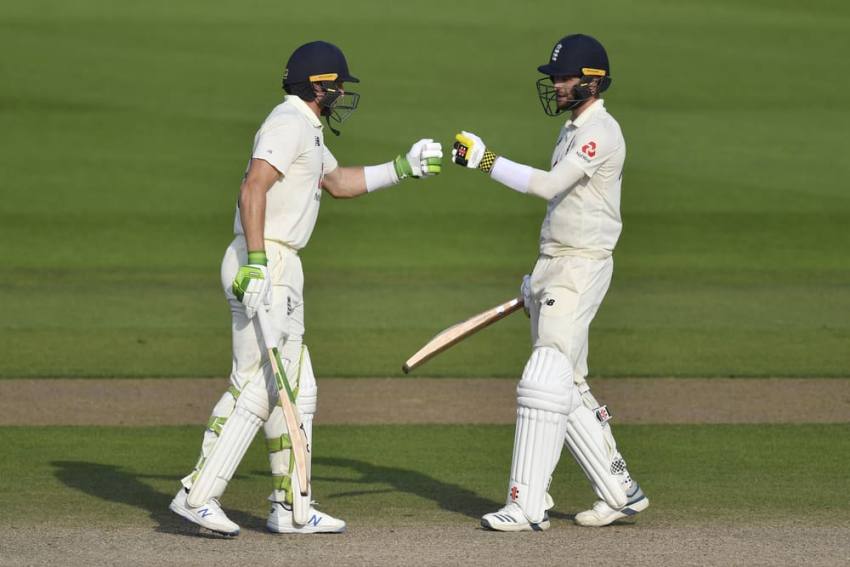 Jos Buttler, left, and Chris Woakes fist bump during the fourth day of the first cricket Test match between England and Pakistan at Old Trafford.
AP
Arijit Ghosh August 09, 2020 00:00 IST England Vs Pakistan – A Classic Example Of How Test Cricket Always Gives You A Second Chance 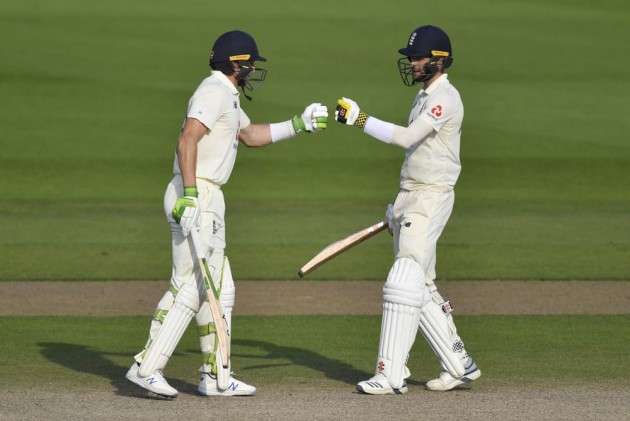 It was the fourth successive time a Test match finished in less than four days since the resumption of international cricket, providing more fodder for the four-day Test lobby, but what a fascinating, seesawing game of cricket it turned out to be at Old Trafford. Pakistan was hugely impressive and did everything right for the first two and a half days of the match, before unexpectedly falling away in their second innings and lost the game against England over the last one day or so.

But that is the beauty of Test cricket, it gives you a second chance, it gives you opportunities to come back from seemingly lost situations. A tactical error or two, one bad day in the field, a sniff of an opportunity and the match has turned on its head.

How magnificently two late middle-order England batsmen rose to a big second innings challenge and took the game away from Pakistan. Pakistan boldly opted to bat in overcast conditions, with the lights on and Jimmy Anderson, Stuart Broad, Chris Woakes and Jofra Archer to reckon with and hit their Test match rhythm straightaway. Pakistan batting was disciplined and classy and their bowling was aggressive as expected, but disciplined too, allaying fears about their inexperience.

Babar Azam was outstanding on the first day when rain and bad light restricted play to just 49 overs. Babar played some delectable cover drives and used his feet well against offie Dom Bess to sweep and drive. Azam pounced on anything short or wide as he played a fluent innings that was a joy to watch, moving to 69 when play ended. Babar Azam had arrived in England with four hundreds and a 97 in his previous seven innings and seemed to have picked up from there.

Credit to left-handed opener Shan Masood at the other end, who survived a torrid first hour, when he looked as if he could nick every ball, to remain unbeaten on 46 at the end of the first day.

Shan who had perished edging moving balls repeatedly on previous tours to England, displayed great mental strength in this innings, leaving balls outside the off stump, covering his stumps well and playing close to the body. With Shadab Khan, Shan also ran a lot of quick singles off defensive shots putting pressure on the England fielders. 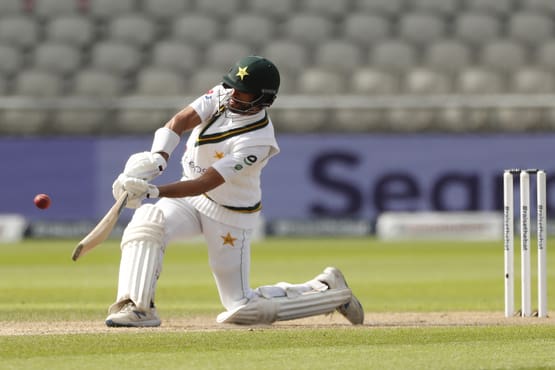 Shan Masood hits a six during the second day of the first cricket Test match between England and Pakistan at Old Trafford. Credit: AP

England had a good pre-lunch session on the second morning when Pakistan lost three quick wickets with Babar Azam falling without adding to his overnight score. But the 100 -run partnership between Shan and Shadab turned things back in Pakistan’s favour with some aggressive running and batting. Shadab specially, showed good attacking intent right from the beginning, getting to 40 in just 61 deliveries, with both batsmen getting in big, positive strides forward to the ball.

Shan, changed gears after Shadab’s departure just before tea and raced away to wonderful, game shaping 156, batting 107 overs in the process. He was ninth out, in one of the greatest knocks by an opening batsman in England in recent times. Thanks largely to Shan Masood, Pakistan had executed their batting plans perfectly.

Pakistan’s bowling plan of picking up early wickets was also soon under way as Dom Sibley was caught in front by a beautiful in-cutter from Mohammad Abbas that caught him plumb in front, a tentative half step forward. Ben Stokes and Joe Root began by standing well outside the crease to Abbas to negate the possibility of an LBW and that brought the wicketkeeper Mohammad Rizwan up to the stumps, in a brilliant battle.

England in their now customary nightmarish start, were tottering 12 for 2 and this became even worse at 12 for 3 as Stokes was bowled by an Abbas beauty that angled into the left hander from round the wicket and moved away just enough after pitching, to beat the forward defensive shot and clip the top of the stump. It was the seam bowler’s version of Shane Warne’s ‘Ball of the century!’ 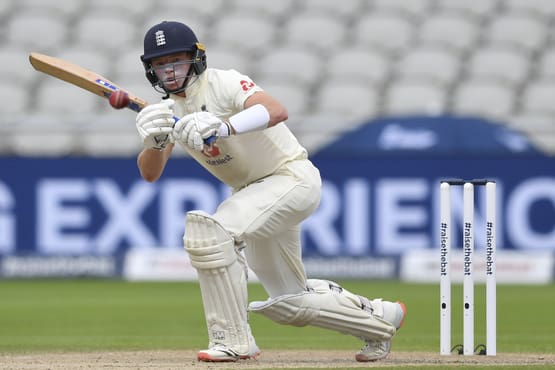 Ollie Pope bats during the third day of the first cricket Test match between England and Pakistan at Old Trafford. Credit: AP

A 50-partnership between Ollie Pope and Root off 88 balls steadied things somewhat but Root, still very tentative, went almost immediately afterwards, caught behind for a scratchy 14, flashing at the leg spinner and plunging England into dire straits at 62 for 4. Pope, classy and impressive, played his shots at the other end, executing some fine cover drives and pulling a 90 mph Naseem Shah delivery from well outside the off stump to the mid-wicket boundary.

At close, England were a precarious 92 for 4 with Pope having scored exactly half of those runs in a great little innings. Once again it was up to the pair that had rescued England in the last Test Match, to steady the ship. Jos Buttler after two bad days behind the stumps having missed two catches and a stumping, needed to redeem himself with the bat.

On the third morning, Naseem gave a glimpse of the kind of bowler that he will be in a couple of years when he got rid of the classy Pope with a brute of a delivery that the well settled batsman could only fend off his face to gully. Pakistan bowlers gave nothing away in the first hour, in a display of fast, hostile and accurate bowling.

ALSO READ: Ben Stokes Ruled Out Of Remainder Of England Vs Pakistan Series Due To Personal Reasons

England lost five quick wickets after lunch as leg spinner Yasir Shah literally ran through their batting, with the batsmen standing rooted to the crease, not using their feet, not using the depth of the crease. It was only some quick runs by Stuart Broad and Jofra Archer in the end that saw them edging past 200, trailing by 107 runs on the first innings. It was an almost exactly similar situation to the one they were in at the end of the first innings of the first Test against the West Indies. 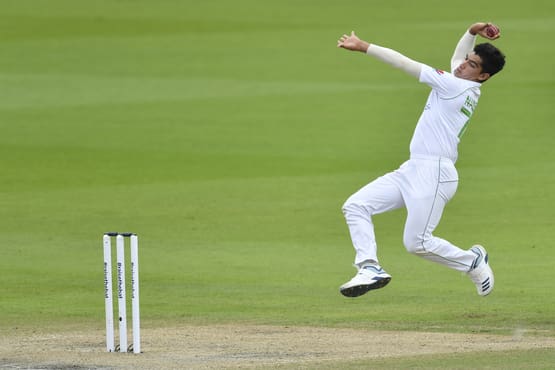 Naseem Shah bowls a delivery during the fourth day of the first cricket Test match between England and Pakistan at Old Trafford. Credit: AP

Pakistan, right on top at this stage, now needed to score just about 250 or so in their second innings and put England in on a wearing, fourth innings wicket. The visitors had controlled the game right up to this point and like their batting, their bowling plan had also executed perfectly.

Amazingly, things started to unravel for Pakistan at this point as the England fast bowlers turned in a great display of seam bowling with off spinner Bess chipping in as well. Masood, the first innings centurion, fell in the second over for a duck, caught down the leg side. Cricket, the great leveller, had claimed the first innings centurion for a duck in the second! The other first Innings batting hero, Babar Azam also went cheaply for 5, with Ben Stokes taking a low outer edge in the slips off Chris Woakes.

Both Mohammad Rizwan and Asad Shafiq got starts and batted well for a while and Yasir Shah had a late flurry with the bat, top scoring with 33, but none of them could go on to play the kind of innings that would take the game away from England. The England bowlers on their part, were relentless in keeping up the pressure as Pakistan collapsed to a below par 169 all out in just 45 overs. Stokes and Woakes produced crucial breakthroughs and Broad picked up three wickets again, as in the first innings. Anderson remained wicketless for once.

This left England a difficult but not impossible 277 to get for a win that had looked highly improbable after the first innings debacle. At 86 for 1 with Root and Sibley both eyeing half centuries, the target looked definitely gettable. The topsy-turvy match turned spectacularly once again at this stage, as England lost five wickets for 31 runs in a sudden collapse that left them tottering at 117 for 5 and Pakistan were back on top again.

Buttler with a point to prove, and Woakes, hit on the head in the first innings, came together at this stage and what magnificent knock both of them played, under pressure, as they stitched together a classic 139-run sixth wicket partnership that brought England to within 21 runs of the target.

When Jos Buttler finally departed for a match-winning 75, unpleasant wicketkeeping memories well behind him, it was all over. Man of the Match Woakes remained not out on a memorable 84 to see England home, as England went 1-0 up in the series. Yasir Shah again picked up four wickets to take his tally to eight in the game, but he couldn’t produce the breakthroughs that Pakistan needed. 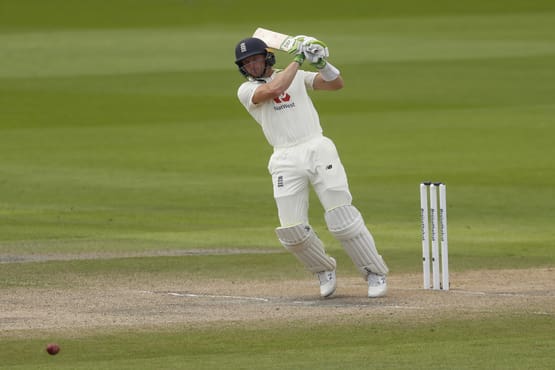 Jos Buttler bats during the fourth day of the first cricket Test match between England and Pakistan at Old Trafford. Credit: AP

It was a very creditable batting performance by the lower middle order that got England over the line on a fourth innings pitch, but their top order still looks distinctly iffy.

Pakistan for the most part of the match, looked the talented, exciting side that they are and it looks all set to be a riveting contest ahead. England have now won three Test matches in a row, all within four days and their bowling attack has hit top gear, but it is the batting that could bear watching, as they look to take a strong grip on the series.

Open Letter: Belligerent Patriotism Is One Thing And Guarding The Borders Another