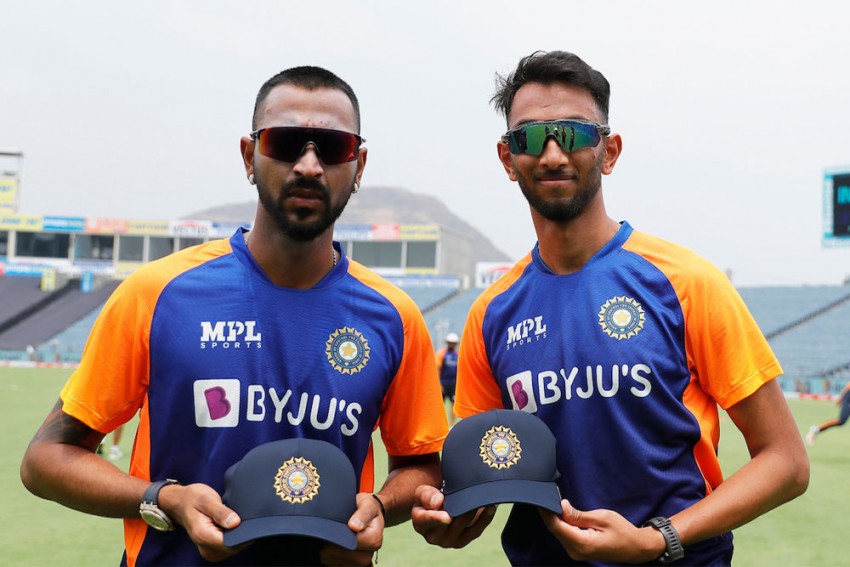 India blooded Krunal Pandya and Prasidh Krishna in the first ODI versus England in Pune on March 23. Both made dream starts
BCCI
Arijit Ghosh March 25, 2021 00:00 IST Led By Debutants Why Indian Cricket Is On Top Of The World 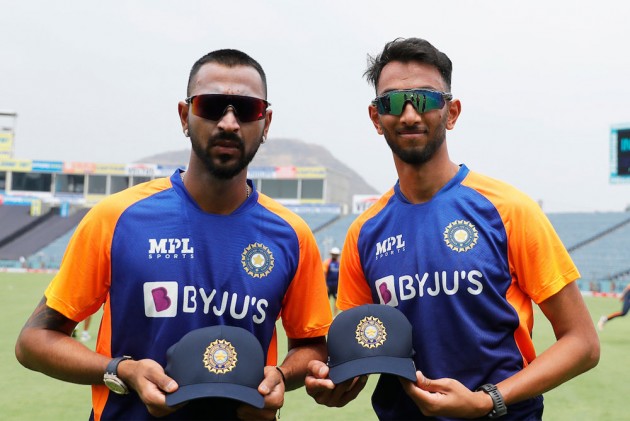 It was yet another unbelievable come-from-behind victory for the boys in Blue who have acquired the happy knack of engineering these impossible turnarounds with unfailing regularity, be it in Test cricket, ODIs or T20 internationals.  It was also an indication and a warning, of the tremendous depth of talent that is available to Team India across formats, which no other nation can hope to match at this time.

It also reinforces the belief that in most cases, the current policy of selecting a player for only in a particular format does not really hold water, since in recent times, we have seen a whole raft of players, originally selected to play in one format, succeed in another format when called upon to play there, because of injury, or rotation policy replacements, or any other reason.

A good player at the end of the day, remains a good player, irrespective of the format, although, given India’s present embarrassment of riches, the ‘horses for courses’ selection policy is probably a good way of providing an opportunity to young players who would have otherwise had to wait much longer for their break in international cricket in the normal course. And how magnificently these youngsters have boldly grabbed their chances at first opportunity, possibly changing the face of Indian cricket forever.

India rode yet another set of wonderful debut performances, along with two fairy-tale comebacks by players lost in the wilderness, to move into the lead in the ODI series, after a day of high drama and topsy-turvy cricket that had the viewers on the edge of their seats in Pune on Tuesday (March 23). Some great batting performances and some equally memorable comebacks by the bowlers, marked yet another day of sparkling cricket on a beautiful wicket.

A match that had looked anyone’s game for the most part, was won in the end by the magnificence of the Indian debutants and comeback men, as they helped India to snatch one of their most memorable ODI wins from what looked like certain defeat with the England openers blazing away to 135 for no loss in 14 overs.

England's once-in-many years opening partnership of Jason Roy and Jonny Bairstow is averaging 60.45 per innings currently and scores at 7.04 runs an over. They have now put on more than 2,500 runs in 42 innings and guided their team to unassailable positions in many ODIs, very early on in the game.  In contrast, India have batted more steadily in the beginning, before exploding in the death overs. In this ODI, from 39 for none in the first 10 overs, they got to 317 thanks to a sensational 112-run stand between KL Rahul and Krunal Pandya in last 9.3 overs. 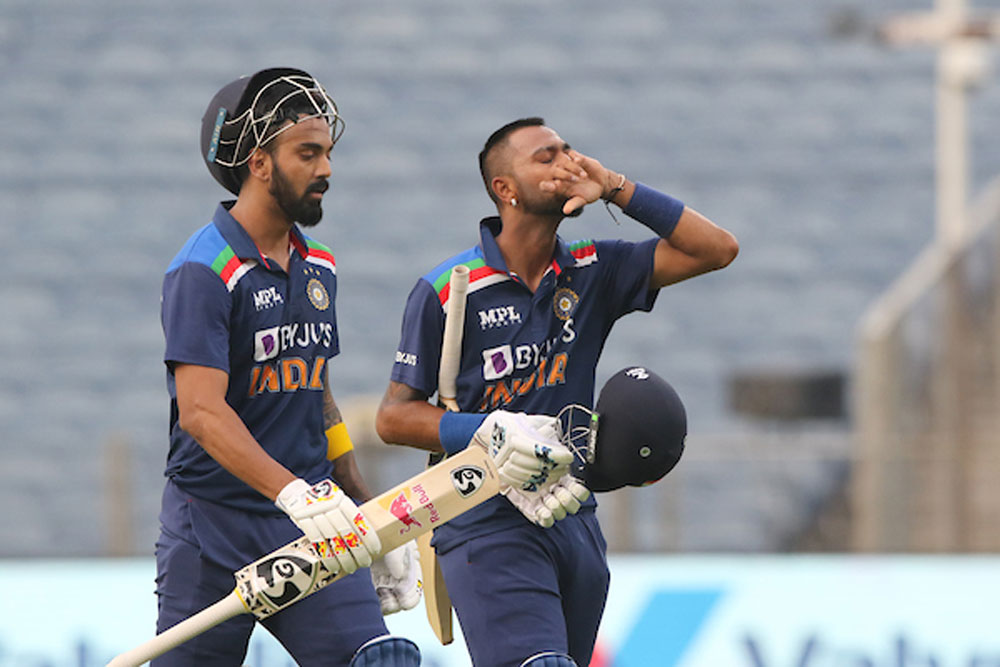 Krunal Pandya and KL Rahul’s late charge took the Indian total past 300. Pandya was in stunning touch in his maiden ODI. Photo - BCCI

After another comeback man, Shikhar Dhawan’s impressive 98 off 106 balls at the top of the order, Rahul finally found redemption with a magnificent 62 not out in 43 balls that brought back glimpses of his best form and should now put him back on track in his comeback to the side, after a string of failures.

However, it was the charge of the debutant brigade, led by young Krunal Pandya's incendiary 26-ball half-century, the fastest on debut in international cricket and his explosive strokeplay towards the end, that lit up the match. His innings combined with the other debutant Prasidh Krishna's equally strong performance with the ball, brought England down from that hugely dominant start.

In a poignant, now-familiar scenario in Indian cricket, Krunal Pandya emotionally dedicated his performance to his recently-deceased father, who has been the inspiration and driving force behind their success. And in a very welcome change, the Indian team had two brothers playing together again in XI after quite some time.

Krunal, unlucky to have missed out donning India colours earlier, has been prolific this season scoring 388 runs in five games, at a Bradmanesque average of 129.33, in the Vijay Hazare Trophy to earn his ODI call-up. 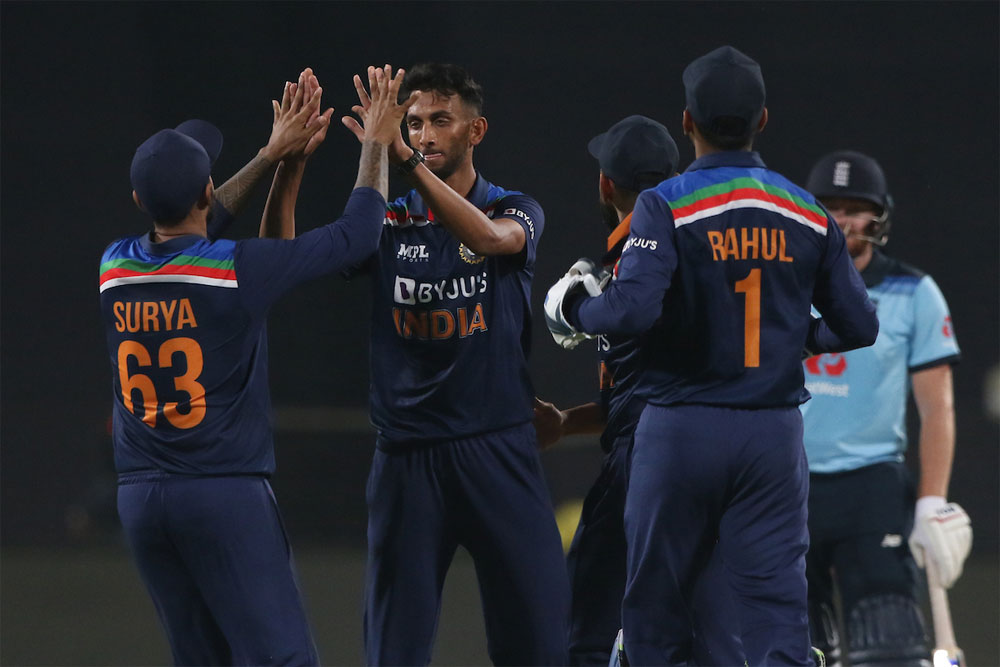 Prasidh Krishna returned to break the back of the England batting. His ability to keep his nerves was noteworthy. Photo - BCCI

Krunal and Prasidh Krishna were the latest in a long list of debutants, who have sensationally exploded on the International stage, following the footsteps of the Ishan Kishans, Suryakumar Yadavs and Axar Patels this season. They were in turn, equally spectacularly preceded by the Washington Sundars and the Shardul Thakurs and the Natarajans and the Mohammad Sirajs earlier, across different formats, in a rare show of talent.

All these players have demonstrated in no uncertain terms that they are international cricket ready, thanks mainly to their exposure to the Best in the world on what is one of the most intense of cricketing platforms, the IPL and also due to the strong domestic cricket structure in India.

When India bowled, young Prasidh Krishna, claimed an equally impressive 4/54 in his first outing for India, making it the first time that an Indian seamer has taken more than three wickets on debut in the last 24 years. His debut did not begin well as the England openers went berserk from the word go, but Krishna showed tremendous mental strength and maturity when he came back in his outstanding second spell.

Prasidh first removed Jason Roy with one that came in and then picked up the crucial wicket of Ben Stokes, at a time when England were going at 8.5 runs per over. He would have made it three in two overs, if a catch had not gone down in the slips at that stage.

That marked the beginning of India’s stirring comeback, as England collapsed and their fortunes went spectacularly south from that point. In a great team effort, the Boys in Blue pulled off yet another comfortable win from what had at one stage, looked like a hopeless situation. And this ability to repeatedly win from near impossible situations across different formats, highlights India’s current dominance of the game.

One that could well continue over the coming years, given the depth of their youthful talent.