So Has MMS Got Going? 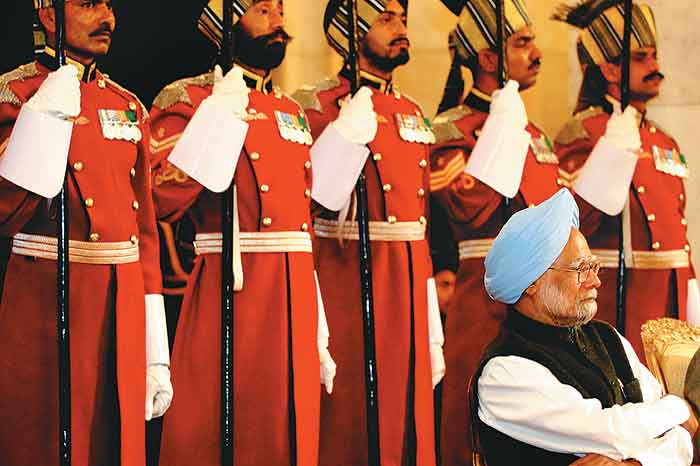 It is understandable perhaps that the PM's remarks in his meeting with some of the print editors on September 6 will continue to be analysed. First Neerja Chowdhury in the New Indian Express on September 8:

This was the second time in three months that Manmohan Singh made clear that he did not intend to throw in the towel. This was a strange thing for the PM to do, particularly since he happens to be a PM who enjoyed the goodwill of Sonia Gandhi and was the only non-Nehru-Gandhi to be projected as the Congress’ prime ministerial choice before the election, in 2009. And if you look at the situation dispassionately, he continues to be the best bet for her. His words showed that either some wanted him to step down — there has been a buzz that he might quit either after the Commonwealth Games or after US President Barack Obama’s visit or after the UP elections in 2012 to make way for Rahul Gandhi — or that he was himself contemplating it.  [Read on: An ideological tussle ]

The PM is disinclined to make casual comments. What he said last Monday may not have been scripted but they had been carefully thought through. In both his defence of Chidambaram (not merely the individual but also his management of the Home Ministry) and his indictment of environmental over-zealousness, Singh had a direct political message to his party. He seemed to be suggesting that every individual claiming privileged access to 10 Janpath doesn't have a monopoly of correctness in a broad church party.

This appears to be an audacious contradiction of the assumptions on which the Congress has hitherto proceeded. Whether Singh was gently testing the waters or indicating that he can also be his own man is a matter of conjecture. Conventional wisdom would suggest that he was signalling to the Gandhis that their hounds had to be tamed. [Read the full piece: Disquiet in Congress]

And over the weekend, writing for the Times of India, M.J. Akbar wondered why the PM chose to compare his cabinet with those of Congress's "supreme icons" and that his "less-than-laudatory reference to Nehru, Patel and Indira Gandhi was a revealing moment":

Rao was the first prime minister of what might be called the non-Nehru faction of Congress. Over the last two decades, Rao and Singh, with occasional help from right-wing parties, have sharply diluted the Nehru-Indira legacy, even as they continue to pay lip service to their names. They sincerely believe that they have served their nation better with economic reforms that took an axe to the state sector, and a strategic partnership with the United States. Indeed, they have been widely applauded by the new-economy elite. Rao even damaged the social consensus that Nehru forged between Hindus and Muslims after the trauma of Partition. Singh, of course, does not contribute to such radical social revisionism. But in the vortex of his unexpressed thought is perhaps a sense that history will place Rao on a pedestal higher than Nehru. [Read the full piece: Memo to PM: Ego is unflattering]

In his Sunday Guardian column, Mr Akbar again returned to the PM's remarks in his meeting with the editors, albeit in passing:

Years of being politically correct at the cost of economic discipline are beginning to tell. He tipped over when the Supreme Court instructed his Government to feed the impoverished instead of letting grain rot. Dr Singh’s retort was sharp; in sum, that the Government was not in the business of charity. If the grain had to rot, so be it; if the impoverished wanted food they would have to go to the market. There is economic logic, apparently, in letting rats get fat. The Supreme Court, said the PM, should live outside the policy zone. If a lesser being had made such a remark, it would doubtless have invited contempt of court, but even supreme judges know better than to summon a Prime Minister at the drop of a remark.

Read the full piece: Wanted, a Nobel Prize for Honesty

On Saturday, September 11, Shekhar Gupta had some advice for the PM in the Indian Express:

When a newspaper article, or even stray criticism by an NAC member can chill the government into rethinking or inaction, the only way to function is to institutionalise that interaction. How that is best done, the prime minister and Sonia have to figure out. Otherwise excuses to do nothing will keep arising, and so will irritants.

Read on Go, or Get Going?

What do you think?