Sisters and Brothers of America... 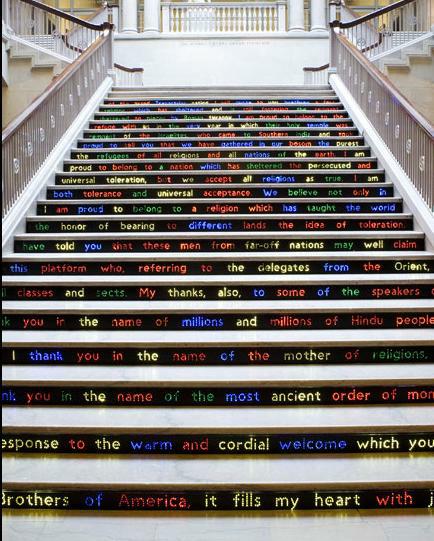 To mark the 9/11 anniversary, artist Jitish Kallat turns the Grand Staircase of the celebrated Art Institute of Chicago into a meditation on religious tolerance, drawing on the museum's own history in concert with the most devastating terrorist attack on American soil, artdaily.org reports:

Public Notice 3, a site-specific installation, brings together two key historical moments: the first Parliament of the World’s Religions, opening on September 11, 1893, in what is now the museum’s Fullerton Hall, and the terrorist attacks on the World Trade Center and the Pentagon 108 years later, on that very date.

In 1893, during the World's Columbian Exposition, the museum's building served as the site of one of the most important gatherings in the history of modern religion, the first World’s Parliament of Religions. One of the opening speakers was a young Hindu monk from India, Swami Vivekananda, who stunned and enthralled the audience of 7,000 with an address that opened one of the first dialogues between Eastern and Western traditions and, importantly, argued passionately for universalism and religious tolerance.[Read on at artdaily.org]

The Indian Express had a report on it some days back, where it quoted Kallat as saying:

“After the 9/11 attacks, everyone was paranoid, especially towards religion. Intolerance was at its peak. The date of the attacks became a symbol of fear, and people drew ridiculous meaning out of it. Amidst the chaos, I decided to find a positive meaning of it all. Upon looking back into history, I discovered this speech, ironically delivered on the same date as the biggest terror attack on the US. It’s one of the first presentations on Hinduism made to a Western audience and hence, a symbol of religious tolerance”  [Read on here]

The gap in time between the two events is also significant. The number 108 recurs in Hindu numerology and is the number of beads on the Hindu rosary, a circular incantation.

Kallat however, makes sure to travel into historical fact rather than the array of mythical contemplations that followed 9/11, to reveal that at a peculiar convergence of time and space: reality itself can be eerily coincidental.

The fascinating aspect of this exhibition is the conjunction of several diverse dualities, much like the Swami's speech itself which quotes the Bhagavat Gita in its opening, as if to symbolically bridge Hinduism and Islam, a struggle that India has not yet reconciled.

"As the different streams having their sources in different places all mingle their water in the sea, so, O Lord, the different paths which men take, through different tendencies, various though they appear, crooked or straight, all lead to Thee!"

Read on at CNNGo