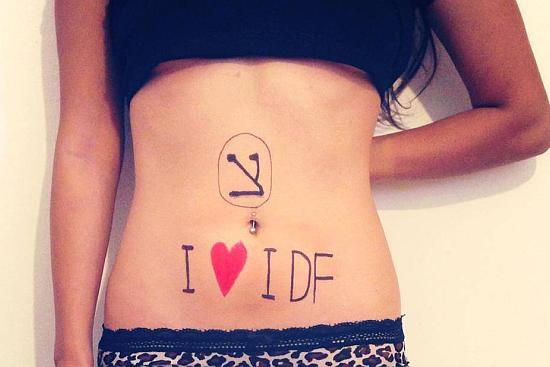 While Israel wages its violent war on Gaza, a different battle has been going on in cyberspace.

First came Israel's high-profile StandWithUs —Supporting Israel Around The World — campaign, calling on people around the world to write "I stand with Israel" on the palm of their hand and photograph it next to their passport.

I've been thinking about doing this for a while now, finally decided to. I stand for justice. #ThePassportMovement pic.twitter.com/nSgIcjqEG7

So far so good. But it is the "Standing With IDF" Facebook page with "sexy selfies" by women with "I [heart] IDF" emblazoned across various breasts, buttocks and other bare body parts that has made many uncomfortable—even among those supporting Israel and defending Israel's violence in Gaza.

The page was first removed by Facebook, but a new one with the same name was soon created and has already 30,740 likes.

Gavriel Beyo, the page’s creator, had also started a similar page for men to post nude pictures, which too was removed by FB, but was not duplicated.

“I was blessed with a lot of great looking female friends,”  Beyo told The Daily Beast. “I was trying to romanticize IDF and Israel. Everything related to Israel lately is labeled very grim…[these pictures] can serve as an ease.”

This is how the page described its purpose:

Fighting for the Israeli front. You’ll guard on top, we’ll guard your bottoms! We will win this battle of beauty for you.

Dear beloved IDF soldiers, we are here as an act of appreciation, you do not need to wait for 72 ugly virgins, you are our heroes. The beauty of Israel girls is waiting for you, here back home. Come back to us.

Additionally: among this page’s fans, we will have a monthly IDF soldier picked out for the special treatment… you know what they say, girls love heroes.

We would love to get your pics.

Perhaps when the IDF saw that it was losing the perception war with photographs of corpses of children of Gaza filling up social media, perhaps naked women was considered a safe bet.

It was also an opportunity for grotesque double entendres for the The Times of Israel which headlined its coverage of the page as “Israeli women do Gaza strip for the IDF”  which quoted Beyo as asking the IDF to “think of these pictures any time it gets hard (in any way…).”