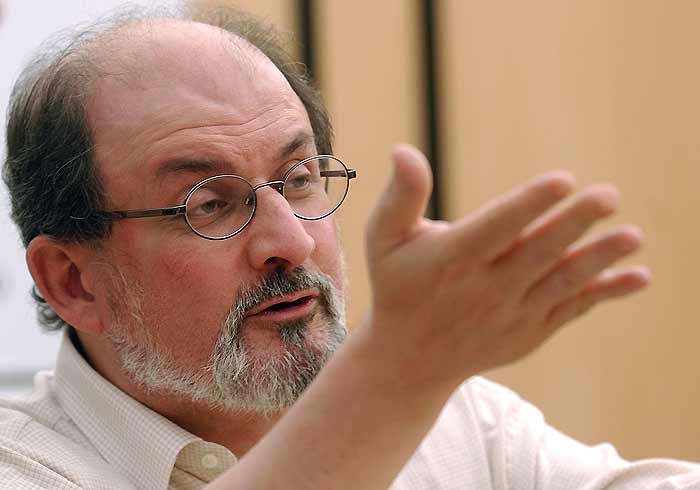 It's all happening out there.

First, this year's Nobel prize winnder for literature, Mo Yan, declined to sign a petition -- endorsed by more than 130 other Nobel laureates -- asking for the release of Liu Xiaobo, the 2010 Nobel Peace laureate. Mr Xiabao was sentenced to 11 years in prison back in 2009 for criticizing the Chinese government and calling for greater openness.

In a press conference in Stockholm a few days back, Mr Yan said while censorship should not stand in the way of the truth, defamation and rumours "should be censored."

"But," he added,  "I also hope that censorship, per se, should have the highest principle".

"When I was taking my flight, going through the customs ... they also wanted to check me even taking off my belt and shoes. But I think these checks are necessary."

Refusing to elaborate further on the case of Liu, Mr Yan directed reporters to the comments he made shortly after winning the prize, when he said he hoped Liu would be freed, but said he had no plans to sign a petition calling for the activist's release. "I have always been independent. I like it that way. When someone forces me to do something, I don't do it," he said.

Mr Yan went on the expand on this theme in his Nobel lecture as well:

My greatest challenges come with writing novels that deal with social realities, such as The Garlic Ballads, not because I’m afraid of being openly critical of the darker aspects of society, but because heated emotions and anger allow politics to suppress literature and transform a novel into reportage of a social event. As a member of society, a novelist is entitled to his own stance and viewpoint; but when he is writing he must take a humanistic stance, and write accordingly. Only then can literature not just originate in events, but transcend them, not just show concern for politics but be greater than politics.

Possibly because I’ve lived so much of my life in difficult circumstances, I think I have a more profound understanding of life. I know what real courage is, and I understand true compassion. I know that nebulous terrain exists in the hearts and minds of every person, terrain that cannot be adequately characterized in simple terms of right and wrong or good and bad, and this vast territory is where a writer gives free rein to his talent. So long as the work correctly and vividly describes this nebulous, massively contradictory terrain, it will inevitably transcend politics and be endowed with literary excellence.

“This really is too bad. He defends censorship and won’t sign the petition asking for the freedom of his fellow Nobelist Liu Xiaobo. Hard to avoid the conclusion that Mo Yan is the Chinese equivalent of the Soviet Russian apparatchik writer Mikhail Sholokhov: a patsy of the régime.”

Soon thereafter, Pankaj Mishra too joined the fray. Writing in the Guardian on why Salman Rushdie should pause before condemning Mo Yan on censorship:

The possibility of friction with either the authoritarian state or non-state actors (political and religious extremists) often makes for a degree of self-censorship. At the same time, the need for obliqueness can also make the literary imagination more resourceful.

Such is the case with Mo Yan's deeply interesting fiction. His writing, however, has hardly been mentioned, let alone assessed, by his most severe western critics; it is his political choices for which he stands condemned. They are indeed deplorable, but do we ever expose the political preferences of Mo Yan's counterparts in the west to such harsh scrutiny?

In fact, we almost never judge British and American writers on their politics alone. It would seem absurd to us if the Somali, Yemeni or Pakistani victims of Barack Obama's drone assaults, miraculously empowered with a voice in the international arena, accused the US president's many literary fans of trying to put a human face on his unmanned killing machines; or if they denounced Ian McEwan, who once had tea with Laura Bush and Cherie Blair at 10 Downing Street, as a patsy for the Anglo-American nexus that is responsible for the deaths of hundreds of thousands of people and the displacement of millions more.

Nevertheless, they would not be wrong to detect an unexamined assumption lurking in the western scorn for Mo Yan's proximity to the Chinese regime: that Anglo-American writers, naturally possessed of loftier virtue, stand along with their governments on the right side of history. Certainly, they are not expected to take a public stance against their political class for waging catastrophic – and wholly unnecessary – wars. In fact, very few of them use their untrammelled liberty to do so. Many even pride themselves on their "apolitical" attitude. Furthermore, their political opinions risk no widespread opprobrium even when these mock the same values of freedom and dignity that Mo Yan is evidently guilty of violating.

Mr Rushdie has now responded with a letter to the Guardian which he announced on Twitter as follows:

For the record, the full text of Mr Rushdie's letter to the Guardian: Satanic view that equates democracies and dictatorships:

Pankaj Mishra (Why Salman Rushdie should pause before condemning Mo Yan on censorship, Review, 15 December) makes a series of confused, dishonest and wrong-headed assertions. He misreads John Updike's "blue mailboxes" speech at the Pen congress of 1986. Updike was not talking selfishly about sending away his writing and receiving cheques in return. He was using the mailboxes as a metaphor of the easy, free exchange of ideas and information in an open society. One presumes Mishra is in favour of such a society.

He also misrepresents me. I have never made the claim that the Bush administration was resolved "to bring democracy through war in Afghanistan". I did say that, in the immediate aftermath of the 9/11 attacks, the reprisal attack against the al-Qaida-Taliban axis was justifiable, not to "bring democracy", but to respond to an act of war. In Afghanistan a terrorist group had taken over the levers of a nation state and used that state as a base from which to attack the United States. For all I know, Mishra may feel that instead of fighting back, America should have apologized to al-Qaida for its foreign policy misdeeds and accepted that those killed in the Trade Centre towers deserved to die. I do not accuse him of that. Neither should he accuse me of what I did not say.

But Mishra has stranger fish to fry. Not content with attacking Nabokov, Bellow, Updike, Martin Amis and myself for "selective humanism", he states: "Of course, violence and exploitation underpin all nation states, democratic or not." This – what shall I call it? – this satanic view of human society as invariably founded upon evil is his reason for proposing the existence of a moral equivalence between powerful democracies and powerful tyrannies, and between writers' responses to living in free and unfree societies. People like me should not criticise people like the craven Chinese Nobelist Mo Yan, because, for failing to condemn our own "powerful institutions and individuals", we are patsies too. But democracies are not tyrannies, and responses to the two cannot be this simply equated. Anyway, writers in free societies do constantly criticise the powerful, and are not simply the docile careerists Mishra says we are. When I was president of Pen American Centre I led that organisation in its constant critiques of the Iraq war, Abu Ghraib, Guantanamo Bay and the Patriot Act.

As to the question of Chinese Nobel laureates: I have long been associated with Pen's efforts on behalf of the imprisoned peace prize laureate Liu Xiaobo and it is not for Mishra to tell me not to criticise the literature laureate Mo Yan for refusing to support him. Mo Yan defended censorship in Stockholm by comparing it to airport security. Airport security exists to guard us against terrorist attacks. Thus Mo Yan was making a moral equivalence between dissident literature and terrorism. That was and is objectionable, and I do not hesitate to condemn it.

Mr Rushdie is no stranger to the Guardian's letters pages. His infamous fatwa-feud with John le Carre, which the two apparently patched up recently, was also carried out on the pages of the Guardian 15 years back.

Mr Rushdie and Mr Mishra also go back a long way. In 1999, Mr Mishra wrote a review of Mr Rushdie's book, The Ground Beneath her Feet (Anatomy of an Anti-Novel): "Fatuous aphorisms, rehashed tabloid gossip and a self-important voice-Salman Rushdie's new novel just can't find the ground beneath its feet,"  wrote Mr Mishra then, calling it "a garish collage of tabloid headlines." Mishra had accused Rushdie of cheaply imitating Gunter Grass and Garcia Marquez.

"With its banal obsessions and empty bombast, its pseudo-characters and non-events, its fundamental shapelessness and incoherence, it does little more than echo the great noise of the modern world; and in doing so it not only ceases to be literature but invites scrutiny as an alarming new kind of anti-literature."

When asked about it, Mr Rushdie had then responded,

"I've never met him. I don't know him, but I've heard that he has this animus, and fair enough. There's always some young punk... "

The two have since continued to spar and snipe at each other intermittently. As recently as this September, while reviewng Mr Rushdie's memoir, Joseph Anton, Mr Mishra wrote, inter alia:

A peevish righteousness comes to pervade the memoir as Rushdie routinely and often repetitively censures those who criticised or disagreed with him... Not just individuals, entire countries, even races are judged, and frequently found wanting...

One would respect Rushdie's wish to decline close scrutiny of a radioactive history and politics that have caused him so much distress. But he is too invested in his self-image as an unpopular "Cassandra for his own time". Back in 1989, he claims, "nobody wanted to know what he knew" – that a "self-exculpatory, paranoiac Islam is an ideology with widespread appeal" – and we didn't get this even after the terrorist attacks on 9/11, which, among other things, vindicated his critically ill-treated but evidently prophetic novel Fury.

"Of course this is 'about Islam'," Rushdie quickly retorted in a New York Times op-ed to those who argued that 9/11 "isn't about Islam", or like Susan Sontag, a loyal friend and supporter, described the attacks as "a consequence of specific American alliances and actions", such as the support of Saudi Arabia and fundamentalists in Afghanistan. According to him, "the restoration of religion to the sphere of the personal, its depoliticisation, is the nettle that all Muslim societies must grasp in order to become modern."

This French-style secularisation was and remains a tall order – even in the United States and much of Christian Europe. In the meantime, Rushdie seemed content to endorse the Anglo-American assault on Afghanistan, and, claiming that another "war of liberation might just be one worth fighting", hailed the CIA-sponsored conman Ahmad Chalabi as "the most likely first leader of a democratised Iraq".

The Most Searched In India? Sunny Leone