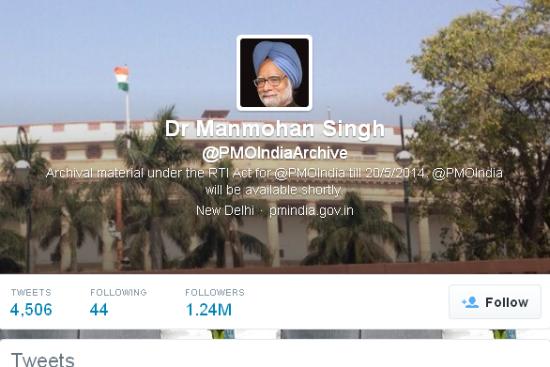 It should have been a simple process. But the Keystone Cops in charge of Prime Minister Manmohan Singh's PMO made such a right royal mess that the good doctor's PMO made the wrong kind of news when the country's trying to be generous in its farewell to the outgoing PM.

The explanation soon followed from the Twitter account of Mr Pankaj Pachauri, the "former Communications Adviser to the Prime Minister Dr Manmohan Singh" who tried to give it a gloss of a routine handover: "An advisory- All our official communiacations are being archived according to the RTI Act. Copyrights and control remain with the office."

It turned out that he had requested Twitter and got  @PMOIndia changed into @PMOIndiaArchive, thus effectively ensuring that not only would @PMOIndia lose its verified status, but all its 1.2 million followers would have to follow the new Twitter account that the incoming PM would inevitably have to use.

And all this when all that was required to do on the part of Mr Pachauri was to share the password of the account with the new PMO team who would just have had to change the DP photo and the name of the PM.

And, of course, a click on the settings tab of the account would have allowed Mr Pachauri, or someone slightly more savvy, to download an archive of the tweets made by the @PMOIndia account which could of course have been kept at the PMO website at http://pmindia.nic.in/

But what Mr Pachauri chose to do instead has justifiably led to a new row that was totally unnecessary, and perhaps, as in the case of many other controversies surrounding the PMO may just have been a result of incompetence than any malicious or devious intent.

BJP was quick with a reaction (see the tweets below too):

It turns out that it was not just the PM's official twitter account, but also the PMO's Facebook page that seems to have been entirely deleted by Mr Pachauri, despite all ingenious protestations about maintaining an archive as per the RTI.