"Telling the Truth," the keynote address of The Sixth Annual Writer's Symposium by the Sea, sponsored by Point Loma Nazarene University. 2001

"Libraries raised me. I don't believe in colleges and universities. I believe in libraries because most students don't have any money. When I graduated from high school, it was during the Depression and we had no money. I couldn't go to college, so I went to the library three days a week for 10 years... I read everything in the library. I read everything. I took out 10 books a week so I had a couple of hundred books a year I read, on literature, poetry, plays, and I read all the great short stories, hundreds of them. I graduated from the library when I was 28 years old. That library educated me, not the college."

Ray Bradbury's daughter Alexandra stated that he passed away in California on June 5, 2012, at the age of 91

If we listened to our intellect we'd never have a love affair. We'd never have a friendship. We'd never go in business because we'd be cynical: "It's gonna go wrong." Or "She's going to hurt me." Or,"I've had a couple of bad love affairs, so therefore . . ." Well, that's nonsense. You're going to miss life. You've got to jump off the cliff all the time and build your wings on the way down.

He didn't think much of the Internet, as he told the NYT:

“The Internet is a big distraction,” Mr. Bradbury barked from his perch in his house in Los Angeles, which is jammed with enormous stuffed animals, videos, DVDs, wooden toys, photographs and books, with things like the National Medal of Arts sort of tossed on a table.

“Yahoo called me eight weeks ago,” he said, voice rising. “They wanted to put a book of mine on Yahoo! You know what I told them? ‘To hell with you. To hell with you and to hell with the Internet.’

He had chosen a burial place at Westwood Village Memorial Park Cemetery and a headstone that reads "Author of Fahrenheit 451": 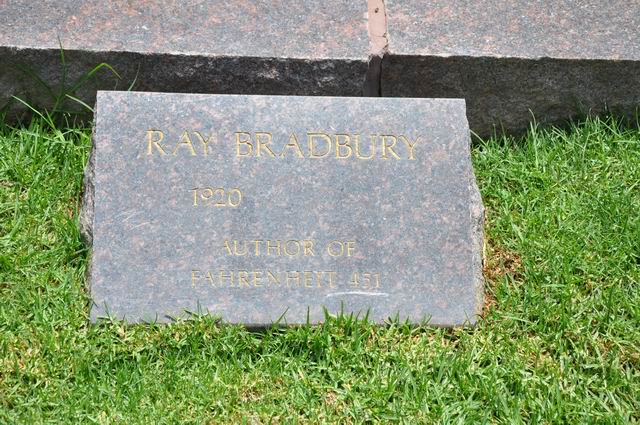 Conversation with the National Endowment for the arts about his life, literary loves and Fahrenheit 451

Lone at night, when I was twelve years old, I looked at the planet Mars and I said, ‘Take me home!’ And the planet Mars took me home, and I never came back. So I’ve written every day in the last 75 years. I’ve never stopped writing...

From the preface to Zen in the Art of Writing:

And what, you ask, does writing teach us?

First and foremost, it reminds us that we are alive and that it is gift and a privilege, not a right. We must earn life once it has been awarded us. Life asks for rewards back because it has favored us with animation.

So while our art cannot, as we wish it could, save us from wars, privation, envy, greed, old age, or death, it can revitalize us amidst it all.

In an interview with a SeattlePI.com blog, she said she’d have a less-sexually charged message for the writer, who was then about to turn 90, if she met him in person. She later tweeted a photograph which she also put up on Facebook, saying:

This is a photograph of Ray Bradbury watching "Fuck Me, Ray Bradbury." My life is now complete.

A few quotes from Fahrenheit 451:

It was a pleasure to burn

I'm seventeen and I'm crazy. My uncle says the two always go together. When people ask your age, he said, always say seventeen and insane.

If you don't want a man unhappy politically, don't give him two sides to a question to worry him; give him one. Better yet, give him none. Let him forget there is such a thing as war.

Give the people contests they win by remembering the words to more popular songs or the names of state capitals or how much corn Iowa grew last year. Cram them full of non-combustible data, chock them so damned full of 'facts' they feel stuffed, but absolutely 'brilliant' with information. Then they'll feel they're thinking, they'll get a sense of motion without moving. And they'll be happy, because facts of that sort don't change. Don't give them any slippery stuff like philosophy or sociology to tie things up with. That way lies melancholy

We have everything we need to be happy, but we aren't happy. Something's missing. I looked around. The only thing I positively knew was gone was the books I'd burned in ten or twelve years. So I thought books might help.

The same infinite detail and awareness could be projected through the radios and televisors, but are not. No, no, it's not books at all you're looking for! Take it where you can find it, in old phonograph records, old motion pictures, and in old friends; look for it in nature and look for it in yourself. Books were only one type of receptacle where we stored a lot of things we were afraid we might forget. There is nothing magical in them at all. The magic is only in what books say, how they stitched the patches of the universe together into one garment for us. Of course you couldn't know this, of course you still can't understand what I mean when I say all this.

The books are to remind us what asses and fools we are. They're Caesar's praetorian guard, whispering as the parade roars down the avenue, 'Remember, Caesar, thou art mortal.' Most of us can't rush around, talk to everyone, know all the cities of the world, we haven't time, money or that many friends. The things you're looking for, Montag, are in the world, but the only way the average chap will ever see ninety-nine per cent of them is in a book. Don't ask for guarantees. And don't look to be saved in any one thing, person, machine, or library. Do your own bit of saving, and if you drown, at least die knowing you were headed for shore.

You're afraid of making mistakes. Don't be. Mistakes can be profited by. Man, when I was young I shoved my ignorance in people's faces. They beat me with sticks. By the time I was forty my blunt instrument had been honed to a fine cutting point for me. If you hide your ignorance, no one will hit you and you'll never learn.

It was pretty silly, quoting poetry around free and easy like that. It was the act of a silly damn snob. Give a man a few lines of verse and he thinks he's the Lord of all Creation. You think you can walk on water with your books. Well, the world can get by just fine without them. Look where they got you, in slime up to your lip. If I stir the slime with my little finger, you'll drown!

The sun burned every day. It burned Time. The world rushed in a circle and turned on its axis and time was busy burning the years and the people anyway, without any help from him. So if he burnt things with the firemen, and the sun burnt Time, that meant that everything burned!

Somewhere the saving and putting away had to begin again and someone had to do the saving and keeping, one way or another, in books, in records, in people's heads, any way at all so long as it was safe, free from moths, silver-fish, rust and dry-rot, and men with matches.

Everyone must leave something in the room or left behind when he dies, my grandfather said. A child or a book or a painting or a house or a wall built or a pair of shoes made. Or a garden planted. Something your hand touched some way so your soul has somewhere to go when you die, and when people look at that tree or that flower you planted, you're there. It doesn't matter what you do, he said, so long as you change something from the way it was before you touched it into something that's like you after you take your hands away. The difference between the man who just cuts lawns and a real gardener is in the touching, he said. The lawn-cutter might just as well not have been there at all; the gardener will be there a lifetime.

'I hate a Roman named Status Quo!' he said to me. 'Stuff your eyes with wonder,' he said, 'live as if you'd drop dead in ten seconds. See the world. It's more fantastic than any dream made or paid for in factories. Ask no guarantees, ask for no security, there never was such an animal. And if there were, it would be related to the great sloth which hangs upside down in a tree all day every day, sleeping its life away. To hell with that,' he said, 'shake the tree and knock the great sloth down on his ass.'