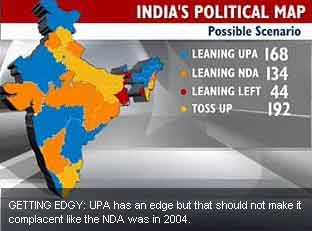 The poll-madness has begun. Never mind how horribly everyone got their poll-predictions wrong the last time around. With elections due in April/May, CNN-IBN-CSDS is first off the mark confirming a hung parliament. Its key findings are:

Another very key finding, once we take away the stats for allies, is that while the UPA is ahead, the Congress and the BJP are almost exactly where they were when results for the last Lok Sabha were announced. The difference in vote percentages is largely because of the allies lost by the BJP.

According to their findings, there are nine ‘toss-up’ states where the margins are so small that no survey can make a safe prediction. These are: Uttar Pradesh, Bihar, Tamil Nadu, Haryana, Himachal Pradesh, Mizoram, Manipur, Goa and Jharkhand -- out of which, the first three are the most crucial.