Vir Sanghvi explained the Indian and Pakistan reactions in the New Indian Express:

... the fate of the earthquake relief some years ago may explain many things. The Pakistanis did not use our relief materials. The only gifts that were distributed were the blankets we sent over. And even there, Pakistan deputed people to handle each blanket individually and to scissor out the label that read ‘made in India.’

This time around, New Delhi was not sure how the offer of aid would be received (with justification, as it turns out) and so took slightly longer than it should have to decide whether or not to offer aid. It does not suggest callousness on our part, quite the opposite. We were just worried about being snubbed. (As indeed we were when we did offer the money).

Read on at the New Indian Express

Dr Manmohan Singh’s response to this gratuitous insult was a testament to his faith: he offered more. The best answer to visceral animosity is surely a civilised handshake, even if one may have to count one’s fingers after the hand has been shaken.

A caveat is essential. We must not confuse the Pakistani people with the Pakistan government. The government was playing politics with a crisis. The starving have no time for cynicism. The true victims of any such calamity are the poor, for the rich live above water. No poll has indicated that Pakistan’s flood-displaced would rather go hungry and roofless than eat wheat or take shelter under a tent purchased with India’s dollars.

In the Sunday Times of India, Swaminathan S Anklesaria Aiyar had, typically, the most novel suggestion after cautioning that "the Indian government  should not offer more than a modest amount of food and financial aid":

...recipients are rarely grateful for alms: they resent being supplicants, and suspect the motives of the donors: The US saved India from mass starvation after the twin droughts of 1965 and 1966 by giving record food aid. But this won the US very few friends and stoked resentment from many who felt India's independence was being compromised. The US will once again be the chief donor to Pakistan, but will gain virtually no popularity or gratitude.

If food and financial aid will not help much, how can India best help Pakistan? The best way will be for the Indian Army to unilaterally withdraw from the border in Punjab, Rajasthan and Gujarat.

And from Pakistan, of course, there have been usual conspiracy theories and other such usual suspects blaming India, but among the most evocative and powerful pieces for me, so far has been Mohammed Hanif  writing for the BBC: 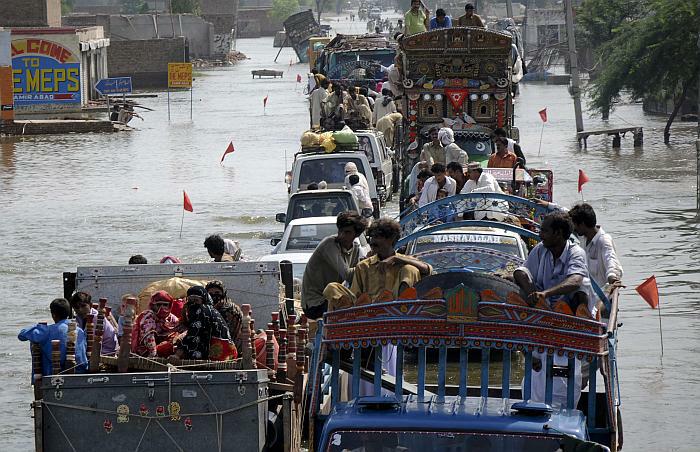 ....a journalist colleague of mine, chasing the flood, arrived in southern Punjab and reported back that the bridge over the river Cehnab resembled a giant set that might have been erected for a film about Partition, when India and Pakistan were prised apart.

A Partition set in Noah's time, I thought.

These areas are of no strategic interest to anyone because they have neither exported terrorism nor do they have the ambition to join a fight against it.

Their only export to the world outside is onions, tomatoes, sugar cane, wheat and mangoes.

The word terrorism does not even exist in Seraiki and Sindhi, the languages of the majority of the people who have been rendered homeless.

They belong to that forgotten part of humanity that has quietly tilled the land for centuries, the small farmers, the peasants, the farmhands, generations of people who are born and work and die on the same small piece of land.

And this time there are 20 million of them.

Read the full piece at the BBC

Also a must read, Manan Ahmed's heart-felt response to the above, joining issue with what he described as using "a cow as a crassly evocative narrative device", protesting against the denial of agency to the flood-victims, treating all of them as potential recruits to terrorism:

What is the point then? I cannot tell you anything that can change your mind. He is poor. He is easily bought by Wahabi or Opium money. He works hard for his meager food. He will swallow whole the dialectic of revolution or of Khilafa. He is traditional in his outlook, in his customs. He is a fundamentalist and a sectarian. He spent some time in the Gulf doing labor. He was indoctrinated with Wahabi ideology. He can recite Bulleh Shah or listen to the Heer for days. He what? He is a human being with a past, a present, a culture, a society, a vision of the good life, a sense of community, a method of belonging, a routine of daily practices, a collection of stories for his children, a corpus of songs for his friends, a set of possessions, a love for radio or tv, a daily grind and an early night. He is waiting to attack us in New York.

You see his suffering through your security, your strategy, your politics. You don’t see him as a human. Just as you don’t see me as more than cattle. You don’t know who he is, so he must be your worst nightmare. If you saw him as human, if you granted him agency, thought, you wouldn’t be so afraid. You would want to help him. Not because he might become Taliban, but because he is your kind, and he needs your help. [Read the full piece here: I Am A Bhains]

And, in between, some more of Pakistan's literary voices:

Where Are The Non-Kashmiri Activists?