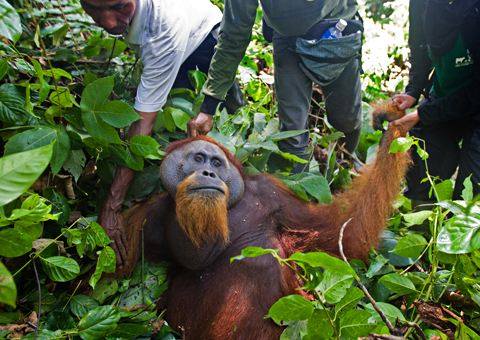 A brilliant, if chilling, photo narrative from Aceh. What does it have to do with India? Oh, but everything. First, the images...shot and put together by award-winning photographer Paul Hilton for The Guardian.

Indonesia is the world's largest producer of palm oil. It's apparently an (often unnamed) ingredient in "one in two supermarket products" -- processed foods, soap, chewing gum, shampoo and what not. And guess where most of its palm oil exports go.

To the same country where a rare political consensus is achieved in that otherwise most disputatious of states, Kerala, over a willingness to visit damnation on the Western Ghats, one of only eight biodiversity hotspots left in the world. This utilitarian worldview bringing about a remarkable pact between even such sworn foes as the Communists and the Church.

Where a central urban development minister, at the fag-end of an election and just a fortnight before a new regime, signs away hundreds of hectares of ancient Aravalli forest around Delhi to real estate sharks and resort builders. The same minister, quite an adept at flying below the radar of riot investigations and scam inquiries, on whom these delicious lines were spoken in the infamous Radia tapes: "He is a doer. He can make his 15 per cent. You can also make money and do national service."

Where all that might soon be dwarfed in scale by what's coming. For the man who would be prime minister and the economic gurus falling over each other to be his advisor promise to dismantle even such institutional restraints as remain in the path of seamless industry clearances owing to irritants like 'environment'. A full embrace of the ideology of the cancer cell.

Chew on these pictures next time you chew gum. Or reach for those chips.