On Some Winding Roads of Digital Garhwal

I took a random trip down Garhwal's digital lanes. It started with a trending online video and led me to a cable operator's office in Delhi's Malviya Nagar, and some old alleys of regional cinema. 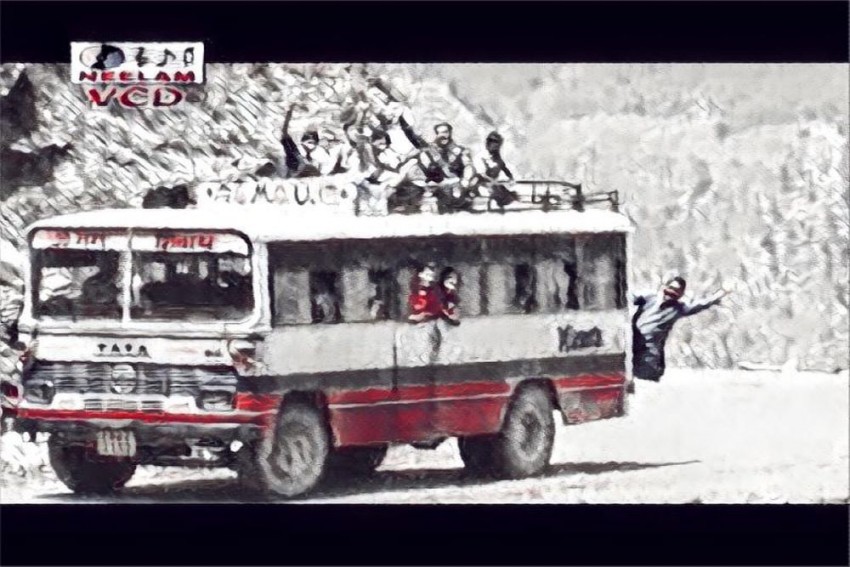 Image taken from the video of the song Sarara Puan, Sarara Sya
Martand Badoni August 21, 2018 00:00 IST On Some Winding Roads of Digital Garhwal 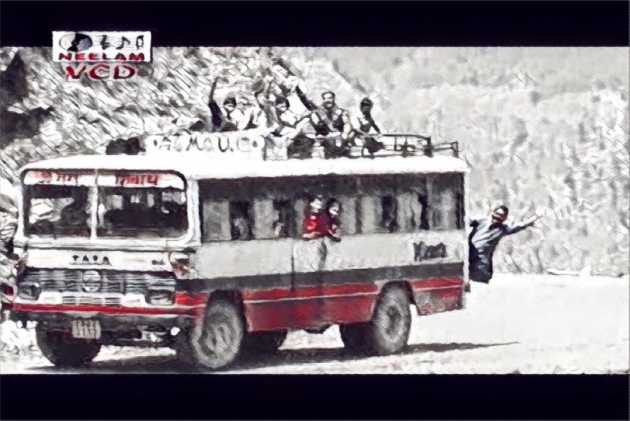 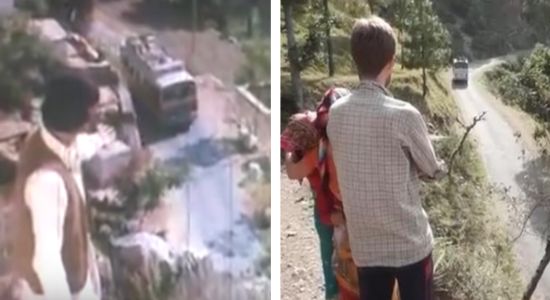 That Bus Rolling Down

Can you believe it, the above two frames are 30 years apart! The first is from Raibar, a popular 1980s Garhwali film, and the second is from a short indie video—titled 'Apna Pahad Ma' (In Our Hills)—that's trending online recently in the Garhwali zone of the internet republic—those 'regional' community pages. Both show a bus leaving the village in the proverbial 'pahad' for the city. Migration has indeed been an eternal theme for Garhwali cinema. But has it persisted so as to be frozen through the passage  of three decades?

Far from it. The time between these two frames has been marked by the birth and growth of the digital revolution—from VCDs to DVDs to YouTube, Facebook and Whatsapp. We all know that story. All of us, truly globalised folk, have been moulded by it. So have visual cultures coming from different parts of the world, needless to say.

I stumbled upon the video 'Apna Pahad Ma' in the Facebook page of Garhwali music legend Narendra Singh Negi. It had Europeans (four British people and one Finnish person) playing “thet” (authentic) Garhwali characters: it was instantly captivating; truly viral stuff. They'd taken the pains to deliver extensive dialogues in Garhwali, the accent swinging in between far off linguistic grids. But, combined with the perfected local gestures and subtitles, it was quite effective. In about five minutes, the plot of the video depicted anxieties around migration and resolved it in a feel good way with ample humour.

The bus scene from the video happens when a local decides to leave his happy family of wife, brother and sister-in-law to go to the city for financial progress. I saw the film Raibar on YouTube a few days after watching this video and couldn't help pause on its own 'bus scene'. So, Apna Pahad Ma was knowingly or unknowingly a tribute to as well as a spoof of early Garhwali films with their migration laced narratives. In Raibar (translates to 'Message'), the bus scene happens during a song where the protagonist is introducing 'my Garhwal. "Why did they turn their faces and leave this land," sings our hero while looking at the city-bound bus passing by. And more than just the sentiment between the two compares.

For the sake of nostalgia, Apna Pahad Ma takes care to recreate an old world look—managing to get that '80s film look: no contemporary clothes, no vehicles and, most importantly, no smartphones.

"The right clothes for the purpose were found by digging into village elders' closets. We even got an old-style underwear specially stitched for a bathing scene in the video," says Devendra Singh Negi, who directed the video and who shy's from calling it a short film. He runs an NGO called 'Pahaadi Society' that works on migration and other local issues from a village near Srinagar, Uttarakhand. He wanted to make something on migration that caught attention, that's when it struck him to ask the European volunteers working with his organisation if they would be interested in acting. And judging from the 'trending' reports online, Negi's attempt has worked quite well.

Diaspora Atop the Digital Bus 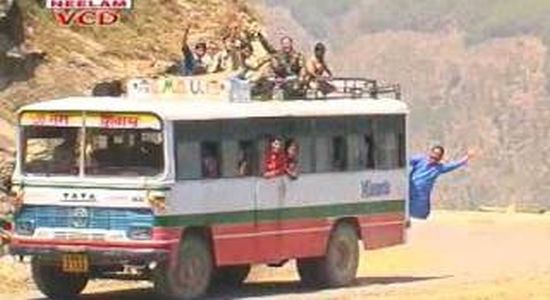 So, what all happened in between our two frames—from the original Garhwali film made for theatres to the spoof-tribute made for the smartphone? Remember cable TV before set-top boxes? Of course you do—the ban on the good old cable, or rather, the compulsive order to use set top boxes came only by 2011. The pre-set top box cable had some interesting grey areas—those locally broadcasted channels, caring little about the concerns of the broadcasting ministry.  They'd show the pirated copies of the latest films. The first wave of the household digital revolution had made this possible—compact discs, copies of which could be burned on a desktop. Quite a few of these 'cable wale ka channels' would also show specifically regional stuff. In Delhi, for instance, I remember seeing Garhwali films on those channels. 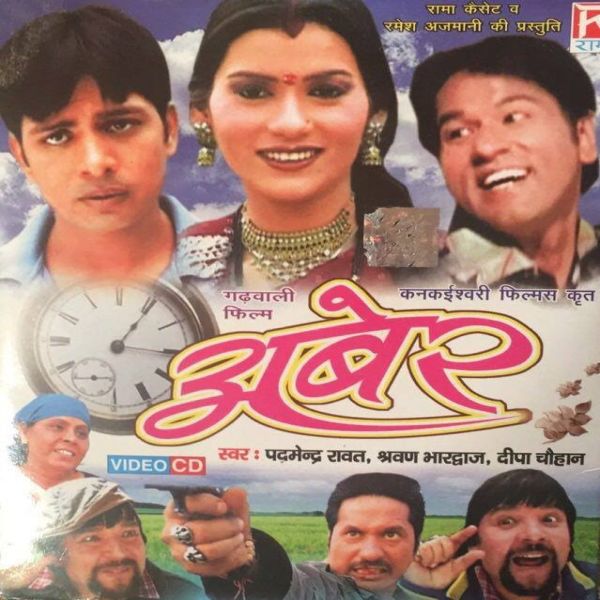 "Bhojpuri, Garhwali and Haryanvi. These three had a lot of demand, so we'd show them," says Rajkumar, who runs a cable business in Delhi's Malviya Nagar. "Yes yes, there are a lot of Garhwalis in Pushp Vihar," joins in another person in the cable office who had started smiling, a glint in his eyes, when I asked about Garhwali films. "I had a Garhwali friend from there who'd give me film CDs that we would show," he adds. "We would also get CDs from Govindpuri in those days. People would call in and ask for us to put up certain films," says Rajkumar.

It was an underground TV scene, catering to identities who couldn't find space on national TV, identities that have huge immigrant populations in Indian cities. That closed down with the set-top-box rule coming in. Eventually, 'legit' Bhojpuri and Haryanvi channels started airing too, but Garhwali? "They have a Garhwali channel too, I'll show you," Rajkumar starts scanning the guide of the DDC cable network that offers a few hundred channels for viewing now. "642...see." A Garhwali movie plays on his TV, the watermark of the company that produced that VCD on the top right corner. They're still playing VCDs, most likely copied to hard discs now, still no legit channel. It's the company doing it, since the demand for it never vanished. Thankfully, this set-top-box company is less sanitised, more local, say than a Tata Sky. 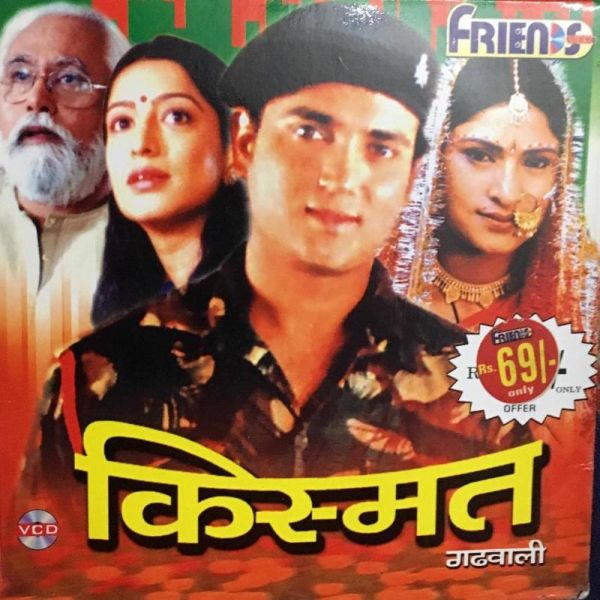 The fate of Garhwali content has been digital for years now. That's how it has travelled to various cites and towns, to the diaspora—on the digital bus, that always remained a private service, never a state bus. The state of Uttarakhand too was born around the digital baby: the year 2000. But it was a state desperate to be taken seriously perhaps, so we had state news channels set up that broadcasted news in Hindi over the years, but never official entertainment channels showing Garhwali and Kumaoni stuff. 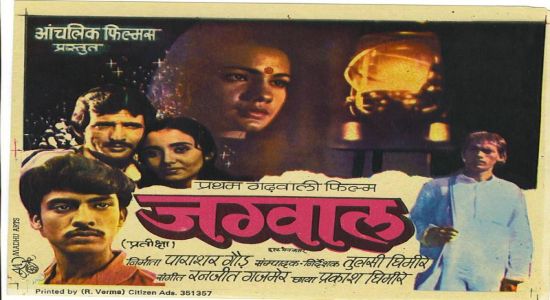 Jagwal (The Long Wait), released in 1983, is credited as the first Garhwali film. And it was indeed after a long wait that Garhwalis, both locals and migrants, got a cinema they could call their own. An anonymous blog floating online mentions that Jagwal—a project of writer, playright and filmmaker Parashar Gaur—was planned to be made in 1975. But a lack of funds froze the project. Crowdfunding from relatives and friends finally contributed to its release years later in Delhi's Malvankar Auditorium in Rafi Marg. Diasporic garhwalis descended in overwhelming numbers to watch it.

In that sense, cinema has been a major binding thread between the locals and migrants. Then came films like Raibar and Gharjwain (House Husband; 1986). They released simultaneously in theatres in metropolitans as well as hill towns. And, of course, they were being made both in the cities and towns. Many films shift their scenes—from Mumbai's Filmistan one moment to a meadow in Garhwal the next. The to and fro of shots almost like a dialogue between the pahad and city, with imagined identity as the fulcrum.

Things seemed to be going good—an industry was being built, film by film. But today, despite a surge of content in the digital space, the Garhwali film industry as such represents a sparse landscape. "Where are the theatres in Pahad?," asks Balraj Negi, the hero of Gharjwain and a star in his own right. "They closed down everywhere—Uttarkashi, Joshimath, Devprayag. "You get a lot of independently produced stuff, and it does well too, but it's all fragmented, not a full production stringed together, no sense of an industry."

Till a few years back, even the VCD market was doing decent business for small-scale distributors, mentions Negi, but all that has reduced too with the arrival of new, 'free' platforms. Negi—who was also seen in the hit film Subero Gham (2014) that was screened at the India Film Festival of Alberta, Canada, in 2017—explains there is no dearth of demand. "Subero Gham was a big hit in Mumbai, Garhwalis from all over want to see these movies." But there are obvious roadblocks. "The state government has no policy to promote films or develop cinema, there's nothing on television, the theatres in pahad have just closed down. We can have a subsidy for films like in Rajasthan and Maharashtra, but the government is just not interested."

So, producers stare at an uncertain market, taking considerable risk in making movies. Coming from a resourceful background helps venture into this fickle industry. The 2018 film Major Nirala, written by ex-Uttarakhand CM Ramesh Pokhrial 'Nishank', did quite well. Ironically, the state capital Dehradun, which is developing rapidly, constantly trying to adapt to big brother Delhi, isn't too interested in local cinema. "Major Nirala did much better in cities like Jaipur and Chandigarh than in Dehradun," informs Negi. 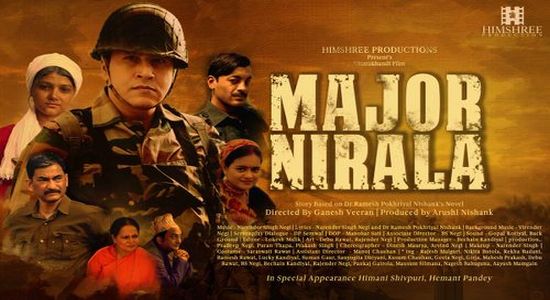 This patch of the journey for Garwhali films has been rather uneven, surprising even. But here's to hoping that the signs point towards an interesting, if not a particularly smooth, future, when the coming generation, well versed with the fast-evolving digital landscape, takes up the reins.

Now, Bollywood has also made attempts, if not inroads, into the Uttarakhand identity landscape somewhat. The upcoming film Batti Gul, Meter Chalu, set in New Tehri, stars Shahid Kapoor as an 'Uttarakhandi' protagonist. If you're familiar with the sounds of either the Garhwali or Kumaoni languages, watching the film's promo may be a cringy experience. The actors have tried to include the staple language conjunctions from both regions in their dialogues: the Garhwali 'bal'and the Kumaoni 'thaera', but frankly, it sounds too forced, and supremely odd if you ask me.It may be a good thing—it could make people yearn for a thriving localfilm industry, one where the dialogues flow in and out of the hills, like the mountain breeze.

Sins And Jeans That Trigger Floods From Kerala To Kashmir