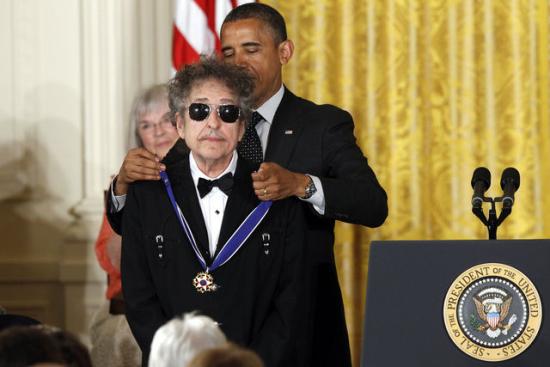 The Local—Sweden's news in English—recently revealed that five Swedish scientists have confessed that they have been quoting Bob Dylan song titles in research articles.

But that is not all, they are also running a wager on who can squeeze the most references in published articles before retirement.

The story apparently has its beginnings in 1997 when two Professors from the Karolinska Institute in Stockholm, Jon Lundberg and Eddie Weitzberg, published an article about intestinal gases in Nature.

They titled it  "Nitric Oxide and Inflammation: The Answer Is Blowing In the Wind", because, as Professor Weitzberg told The Local, "We both really liked Bob Dylan and we thought the quotes really fitted nicely with what we were trying to achieve with the title."

That would possibly just have been that, had a librarian at the University not noticed the article along with another article invoking a Dylan title:  "Blood on the Tracks: A Simple Twist of Fate?" many years later.

This was the title of a 2003 paper about the ability of non-neural cells to generate neurons by a different pair of professors, Jonas Frisén and Konstantinos Meletis.

The librarian connected the two pairs of professors, and the foursome decided that perhaps the two teams could compete with each other to see who could get the most Bob Dylan song titles into their published articles before retirement.

The winner, they decided would get lunch in a restaurant in Solna, just north of Stockholm, where their university is based.

As the word spread about the wager, a fifth contender, Kenneth Chien, while also a professor at the same university, showed up, who, it so turned out, unbeknownst to all of them, had published his very own "Dylan paper" way back in 1998—"Tangled Up in Blue: Molecular Cardiology in the Postmolecular Era."

1997: Jon Lundberg and Eddie Weitzberg, "Nitric Oxide and Inflammation: The Answer Is Blowing In the Wind"

1998: Kenneth Chien, "Tangled Up in Blue: Molecular Cardiology in the Postmolecular Era."

2003: Jonas Frisén and Konstantinos Meletis, "Blood on the Tracks: A Simple Twist of Fate?"

2009: Jon Lundberg and Eddie Weitzberg, "The Biological Role of Nitrate and Nitrite: The Times They Are a-Changin'"

Humour in academia are not a new phenomenon. There are of course the annual Ig Nobel Prizes— that "honour achievements that first make people laugh, and then make them think."

And then there is also what is known as the PhD Challenge, "established in order to promote good humour throughout all fields of academia and science." But that seems to have gone bust.

But as Weitzberg told the Local, these five professors are just Dylan fans primarily. "We're not talking about scientific papers—we could have got in trouble for that—but rather articles we have written about research by others, book introductions, editorials and things like that."

And, as this is the season for Nobels, we should mention that our five Swedish friends seem to think that no one deserves the one for Literature more than Dylan.