No Takers For Mr Sibal's No Loss 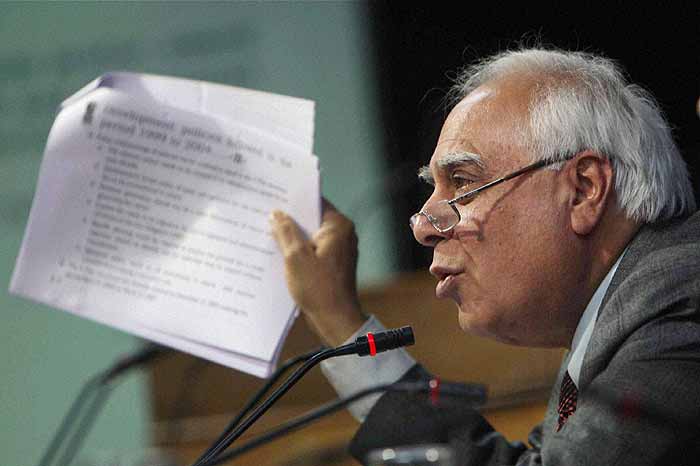 Telecom minister Kapil Sibal's bizarre attempt to defend the indefensible by slamming the CAG's "notional atyaachaar" in its projection of Rs 1.76 lakh crore as presumptive loss on account of 2G spectrum allocation, terming its methodology as "utterly erroneous", and claiming that  there was "no loss at all" to the exchequer due to allocation of licences and 2G spectrum in 2008, has come in for sharp criticism. The PAC and CAG are in good company today in describing his remarks as "improper, against propriety and an attack on the dignity of PAC and CAG". A sampling of some of the prominent commentary:

Union communications minister Kapil Sibal’s attack on the comptroller and auditor-general’s report on 2G spectrum allocation calls into question the government’s ability and willingness to find the truth about the scandal. Sibal has denied that the government suffered any loss because of the controversial decisions of the telecom ministry under A Raja. He has termed as erroneous the calculations of the CAG which said that the loss might possibly be as high as Rs 1.76 lakh crore. By questioning the CAG’s methodology and its findings, the minister is showing an important constitutional authority in poor light. The CAG has already defended its report before parliament’s public accounts committee (PAC). The commerce secretary also appeared before the PAC but did not question the figures projected by the CAG. Sibal’s belated attack now raises doubts about the government’s intentions. It is a reminder of the attack launched against the CAG as part of the cover-up of the Bofors scandal in the 80s. If there is no loss to the exchequer and there are only some procedural mistakes in the implementation of policy, why did it take so long for the government to come out with that view?

The point is this: there is no way that this claim of “zero loss” will be read but as an attempt by the government to brazen its way through a severe political crisis. Going with an obvious, barefaced exaggeration might make a certain amount of sense to the more cynical in the UPA. But it is a misjudgement. The complexities of pricing the 2G loss do indeed mean that the average person can’t confidently pick an exact figure, and that the government has chance to attack the CAG’s estimate. But everyone has an intuitive recognition of firefighting. There’s enough despair about politics and scams about right now that the smart political thing for the government to do is to ensure it doesn’t spread, by showing itself willing to submit the process to a thorough, transparent investigation. Brazenness won’t help the political climate. Nor will it aid in ending the stalemate with the opposition. Indeed, it strikes an odd, arrogant note precisely when the government is backing the PAC as an investigatory mechanism — and that committee specifically examines the CAG report. It’s silly to score points on the weakest part of the CAG report when the Supreme Court is monitoring the situation, and the CBI is still in the process of filing a status report to the court.

If Kapil Sibal has chosen to take issue with the CAG’s performance audit of the issue of second-generation licences for spectrum, the explanation must be sought in three factors. First, the Supreme Court has chosen to take interest in the issue of the licences, and has in the process implicitly indicted Mr Sibal’s predecessor in the ministry of communications, A. Raja. Second, the Supreme Court’s investigation of Mr Raja’s questionable activities has raised questions about the inexplicable inactivity of the prime minister while Mr Raja ruled the roost. Finally, Mr Sibal happens to be a lawyer of some experience. The prime minister’s last encounter with the Supreme Court, when he used executive privilege to defend a possible error, was not very astute; a more expert response was called for.

Editorial, "A pyrrhic win", The DNA:

It is clear that Sibal is fighting a political battle on behalf of the Congress and prime minister Manmohan Singh. But politics is not just about winning debating and legal points. It is much more about images and perceptions. The image of UPA2 in the public mind at the moment is that this government is caught up in too many scams. It has much to atone for. Instead of belligerence, this government should display is a sense of penitence and do what it can to clean up the mess.

M.J. Akbar, "Before the court of public opinion", The Sunday Guardian:

If Kapil Sibal believes what he says, he should send in his resignation immediately so that Raja can be reinstated. Why was Raja dropped from the Cabinet, at such political cost, personal anguish and Karunanidhi family heartbreak if he was innocent? At the very least Manmohan Singh owes Raja a grovelling apology. Raja should in fact sue Dr Singh and Sonia Gandhi for libel, since their decision to wrench him out of the office he coveted amounted to, by Sibal’s interpretation, defamation and humiliation on a national scale. Obviously, Sibal was either on holiday or so immersed in his public service duties that he was totally oblivious of media when the Radia tapes took complete control of airwaves and print. Or, perhaps, again like a good lawyer, he had no interest in any fact that would be relevant to the prosecution. Since Sibal will still need a job after resignation, he can easily step into a vacant home ministry. P. Chidambaram will surely now have to resign. Chidambaram, after all, sent a letter to the Prime Minister accusing Raja of malpractice, not mere “procedural lapses”.

Editorial, "Head in the Sand", The Hindu:

If Mr. Sibal's aggressive defence proves anything, it is that the United Progressive Alliance government has a lot to hide. As the 2007-2008 correspondence on the contentious issues between Union Communications Minister A. Raja and Prime Minister Manmohan Singh (published in The Hindu on December 23, 2010) reveals, Dr. Singh was fully in the picture contemporaneously.

And finally, Siddharth Varadarajan demolishes not only Mr Sibal's claims but also points out how "from 2G to KG to CWG the system's logic and rules will always be designed to allow maximum profits for those with real connections" in "Sorry people, we're hanging up on you":

“Milord,” cunning lawyers have argued in countless Hindi movies, “how can there have been a murder when there is no dead body?” I was reminded of this line when I heard Kapil Sibal — who has been performing as an understudy at the Ministry of Communications and Information Technology ever since A. Raja was ousted on corruption charges — bravely defending the legacy of his predecessor at a press conference. By attacking the Comptroller and Auditor General's 2G spectrum scam report and claiming the government lost no revenue despite the fact that “procedural irregularities in the implementation of the first-come first-served policy” may have occurred, Mr. Sibal has done the political equivalent of removing the “dead body” from the crime scene and then declaring his clients innocent. For if the government lost no money through the sale of spectrum in 2008, it stands to reason that the politicians, bureaucrats and businessmen who are today being investigated could not have made any money either. Illegitimate profits cannot be conjured out of thin air — which is what spectrum essentially is. There is no dead body milord.

Sadly for Prime Minister Manmohan Singh and Congress president Sonia Gandhi, who no doubt prepped Mr. Sibal to make his ill-advised arguments, the CAG report is full of incriminating corpses. And their ghosts are likely to stick around long enough to haunt the ruling party at the time of the next general election.

Read on at the The Hindu,

As a reader has also linked in the comments section, Surjit Bhalla in the Indian Express points out that Mr Sibal's "elaborate attempt at showing that there was no loss and only procedural lapses is really a too-clever-by-half attempt to exonerate his own":

It is correct to assume that the “fair” price for anything that can be auctioned is the auction price. But in 2G allocation there was no auction. Yet, unfortunately for the UPA and Sibal, there were strong elements of an auction within the allocation. For at least two such allocations, there was an auction! Licences were given to two shell companies, Swan Telecom and Unitech telecom subsidiary Uninor. Both companies transferred part of the equity to other firms within a short period of time, short enough not to make a material difference to the market price. Raja allocated licences for 122 circles and received Rs 1,651 crore for the government or Rs. 13.5 crore per licence. Both Uninor and Swan offloaded equity in their shell firms: Uninor’s 22 licences were valued at Rs 9,100 crore and Swan’s 26 licences were valued at Rs 7,773 crore. The synthetic auction price per circle: Rs 352 crore. Loss to the government on each circle: Rs 338.5 crore. Total loss for 122 circles: 338.5x122 or Rs 41,300 crore. (Important note: an “equivalent” calculation is present in the CAG report).

No amount of obfuscation, or appealing to the public good or other creative calculations, can hide the simple fact that this was money lost with no gain to the public good, competition, public welfare or anything else the UPA or Sibal can imagine. Equally, there is no way to reach Rs 1,76,000 crore. The CAG can be wronged for giving a range of estimates — but not for documenting that there was a minimum loss to the government of at least Rs 40,000 crore or more than one-third of India’s personal income tax in 2007-08.

Read the full piece at the Indian Express: Too many calculations spoil the truth

My Blackberry Is Not Working