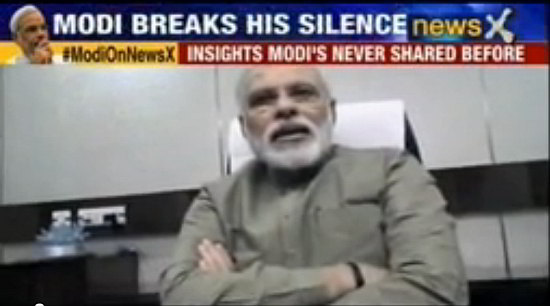 After years of drought, not one but two interviews -- first with unadulterated Modi fan, Madhu Kishwar, for India News and NewsX; and the other for ETV Rajasthan:

Aakar Patel in the Mint: The Narendra Modi interview on NewsX:

It isn’t really an interview so much as stenography...It is a sermon, whose sacred utterance is being recorded...Interventions from the interviewer come primarily as excited giggles, approving moans, and enthusiastic repeating of Narendra Modi’s words

Betwa Sharma in the Quartz: Narendra Modi’s first television interview was more like a monologue

It was publicized as the politician’s first interview of the election season. And yet the whole thing was more like a monologue, hardly in response to or an exchange with an independent reporter.

His musings were part of the documentary research of academic Madhu Kishwar, author of Modi, Muslims and Media. Kishwar said that Modi should be celebrated and not demonized, pointing out that the politician had never delivered any hate speech.

Pratik Sinha in the Truth of Gujarat: Narendra Modi lies through his teeth about Best Bakery Riots Case while Madhu Kishwar nods in agreement:

Narendra Modi in his ‘interviews’ with Madhu Kishwar spoke about all the cases except the Naroda Patia case in which Narendra Modi’s minister Maya Kodnani is serving a life term...Essentially, Narendra Modi is trying to take the blame away from the shoddy work done by Gujarat Police. While Narendra Modi talks about ‘witnesses coming from Gujarat‘, the fact is that in the 44 day trial of the Best Bakery case, 39 of the 77 witnesses turned hostile. The main witness Zaheera Sheikh, who had turned hostile, had walked into the court room with BJP MLA Madhu Srivastava. Srivastava had earlier ‘promised that witnesses would turn hostile in court.’ He was prescient: they did.

Shailaja Bajpai in the Indian Express: How Modi faced the nation

“The media is either unwilling or unable to ask Modi penetrative questions. In these two interviews, he swatted away softball questions with a hard bat. Perhaps he only agreed to be interviewed on condition that he not be asked uncomfortable questions.

If you compare this interview with Rahul’s on Times Now, the contrast is stark: Rahul was asked at least some hard-hitting questions, cornered on issues like the 1984 Sikh riots, although he was allowed to have his say on his pet themes.

In Modi’s case, he simply had his way throughout. Not once was anything he said challenged. It made for poor TV. If he continues to give soft interviews, they will be viewed as plugs for him — another strategy in the marketing of Modi.”

This Election Let Us Elect An Opposition