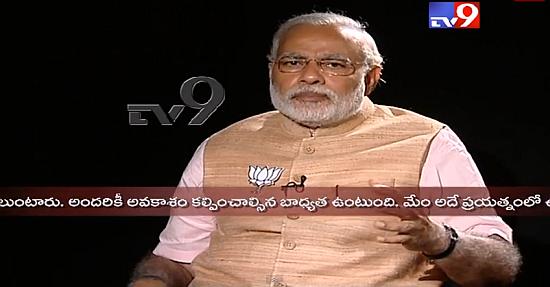 When the BJP's prime ministerial nominee Narendra Modi was specifically asked why he had not apologised for the  post-Godhra riots that occurred under his watch as the chief minister of Gujarat, he dodged the contentious question and instead asked the Congress party to account for its sins [in an apparent reference to 1984 anti-Silh riots] before seeking account from others.

TV 9: There have been a series of allegations against you because of Gujarat riots. You have expressed regret but haven't apologised. These people are asking for apology.

Modi: Who are these people? TV 9: Congress.

Modi: None from Congress have come to meet me. Nor they have even spoken about it(apology). Congress people should first account for their sins before seeking account from others.

The BJP Prime Ministerial candidate was also asked whether he agreed with the statements made by leaders like Prime Minister Manmohan Singh and Finance Minister P Chidambaram that he was a "danger" to the country.

Modi: I have not heard Manmohan Singh speak like this during his ten-year tenure.

On specifically being asked whether his government, if elected, would take legal action against Robert Vadra on charges of land-grabbing in Haryana and Rajasthan, the BJP's prime ministerial candidate says his government would not be vindictive.