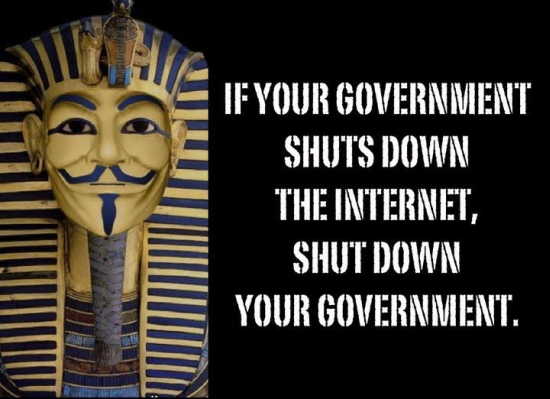 It is strange suddenly to be confronted with the provisions of a law passed way back in 2008. But why should the Information Technology Amendment Act, 2008, pushed through in the weeks following the 26/11 attacks in Mumbai be making news now? The Economic Times, with a report headlined Government can switch off your internet if necessary breathlessly reported yesterday:

The Indian government has armed itself with powers to 'switch off' or kill the internet during times of national emergencies, becoming one of the first few countries to assume such far reaching authority. Even as the US and other western nations debate the judiciousness of giving the government's complete control to shut down cyber traffic, India has moved a step ahead and incorporated a provision under the IT Act of 2008, giving the Central government, or any of its officers specially authorised by it, to block the internet if necessary. The shutdown can happen in the interest of sovereignty and integrity of India, its defense, security of its states, friendly relations with foreign states or for public order. Failure to comply will result in imprisonment of up to seven

But perhaps the report can be excused for the simple reason that because the act was pretty much hustled through Parliament at a time when the national mindspace was preoccupied with other concerns, there was not much analysis or criticism in the mainstream media, though specialised blogs did raise an alarm even then. [See one critique dating back to December 2008 here April 2010 here -- and for the record, the bill was endorsed by the President in Feb 2009, and then only notified in October 2009.]

Read the ET report further and you realise that the reference was perhaps occasioned by the following development that the news report went on to provide:

Not satisfied with this provision, India is now moving ahead to develop alternate plans in case the 'switch' does not work. The draft plan by the Cabinet Committee on Security and Ministry of Home Affairs along with Ministry of IT & Communications to 'choke' the internet at will, which ET reported last year, is also learnt to be in its final stages.

But more dangerous to the issue of freedom of the internet were the recent reports, earlier in the month, of the  blocking of Typepad, Mobango, Clickatell by some ISPs, though only one of them provided a message saying, "This site has been blocked as per request from the Department of Telecom". It was 2006 all over again.

As usual, the real problem was the total arbitrariness of the process and the confusion was confounded further when an unnamed Airtel spokesperson told the Hindu that there was no directive from the government, and this was “just a temporary network problem”.

The crux of the matter can be summed up in this one quote from Nikhil Pahwa of Medianama in the Hoot: "what gets me angry is that we wouldn't even have got to know of the blocking. There are never any indications of which websites are blocked and why. We have got to have more transparency on these issues."

Medianama further reported that on the sidelines of the Gov 2.0 conference last Friday, Communications & IT Minister Kapil Sibal passed the buck on the issue of lack of transparency in the way the Indian government blocks access to websites. Sibal told MediaNama that we should “Ask the Home Ministry, because this is a security issue.”

As Shivam Vij of Kafila asked:

All I want to ask Kapil Sibal is: How is Savita Bhabhi a threat to India’s national security? Wait, I have another question: why should I ask the Home Ministry when the orders for blocking come from your own Ministry, Mr Sibal, and the committee that decides on blocking has only one Home Ministry representative and two from your Ministry, sir?

And when you wonder why the Government of India thinks Savita Bhabhi is too obscene for you, they will say national security!

If you don’t know about the Savita Bhabhi blocking issue, see this Huffington Post article.

All of this of course assumes ominous overtones when one considers the government's attitude on Wikileaks and offers an inkling of the shape of things to come when we look at the recent  release of the long awaited draft rules for important sections of the Information Technology Act 2000, objections to which were sought from the public by February 28, 2011.

So far, the following draft rules have been formalised:

Privacy India and Centre for Internet and Society, Bangalore have offered a detailed para-wise commentary here.

A detailed, para-wise, criticism is available by the Centre for Internet and Society which pointed out, inter-alia:

they vest an extraordinary power of censorship in the hands of the intermediary, which could easily lead to the stifling of the constitutionally guaranteed freedom of speech online.  Analogous restrictions do not exist in other fields, e.g., against the press in India or against courier companies, and there is no justification to impose them on content posted online. Taken together, these provisions make it impossible to publish critical views about anything without the risk of being summarily censored.

The rules are so loosely worded as to cover almost anything. For example, consider Section 3 of the proposed rules, particularly point (g):

"causes annoyance or inconvenience or deceives or misleads the addressee about the origin of such messages or communicates any information which is grossly offensive or menacing in nature;"

Imagine the number of sensitive souls out there who could be claiming "inconvenience" because of "annoyance" having been caused.

A critique by PRS blog | Medianama | Centre for Internet and Society points out, inter alia, that

if enforced it will end up choking public access Internet in the country, whether through Cybercafes or at Wifi hotspots, which would cover all regular cafes that offer Internet access, the airport, where some telcos allow access, or even on-campus connectivity.

While the comments for the above rules were invited only till 28.02.2011, perhaps it would still be useful to let the authorities know what one thinks about these rules by sending an email to: grai AT mit.gov.in

‘Cash For Votes A Way Of Political Life In South India’