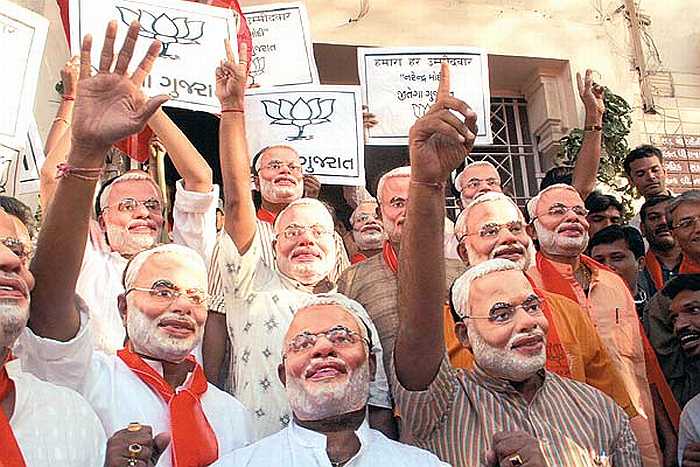 While there is jubilation among Narendra Modi supporters over the Special Investigation Team (SIT) finding no prosecutable evidence against the Gujarat Chief Minister and 57 others in the 2002 Gulberg Society case, the legal battle against him is far from over and is bound to go all the way to Supreme Court all over again.

It is not, however, just what Mrs Zakia Jafri feels. Regardless of the court verdicts, Mr Modi also needs to win the battle in the court of public perception for his national ambitions to come anywhere near fruition. While Mr Modi has a band of loyal followers, and is clearly the BJP's most popular leader among the party supporters, his real test would be in converting those opposed to him -- not only those outside but also inside the party.

As the joke goes, while the Congress has a Group of Ministers for almost every issue, the BJP has a Group of Prime Ministers, or at least prime ministerial candidates. But for the prime ministerial ambitions of anyone to be realised, the party would have to be in a position to command the support of at least 272 MPs. It is this which is going to be Mr Modi's -- and the BJP's -- problem. And that of his other competitors in the party. For they know that the riots of Gujarat 2002 would always cast their long shadows over Mr Modi, just as those of Delhi 1984 have over the careers of Mr Jagdish Tytler and Mr Sajjan Kumar.

Mr Modi recognises that and that is where APCO, the powerful US lobbying firm comes in -- it is said to be behind the recent publicity blitz, with saturation coverage in Time, Brookings and elsewhere. A media blitz and propaganda may help him convert some fence-sitters, Mr Modi would clearly have to do much more than the gimmicks of his sadbhavana fasts if he is to make any headway with the victims of the riots and those who hold him guilty, at least of the crimes of omission if not of commission. While the recent Time poll may have brought Mr Modi some global attention, it also underlined once again what a polarising figure he is:

He was leading the positive votes for the first few days, and then his opponents swung into action and he ended up polling the most negative votes. He finished on third position, behind Anonymous, which is a group of hackers and Eric Martin, a champion of anti-piracy law, with more negative votes (2,66,684) than positive (2,56,792) - Modi in fact topped the list in negative votes.

It is in this context that one should see what Farid Zakaria said recently:

That is what the Congress would be hoping, but Mr Modi's supporters are banking on the other facet of a polarising figure -- the one which brought Mr Vajpayee to power in 1998 (after the experience of 1996 when the BJP could not form a government despite being the single largest party) and the Congress in 2004 (when the BJP had sought to once again make it about Mrs Sonia Gandhi's foreign origin).

Some of the reactions to today's disclosures about the SIT's findings on Twitter: