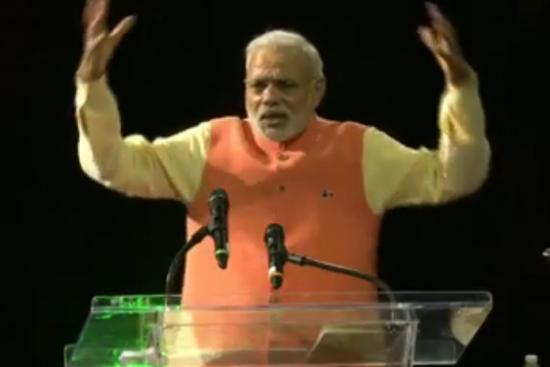 The Economist on Mr Modi's performance at the Madison Square Garden on Sunday, Sept 28:

At 11.45am precisely, a film shows a fantasy India of robots, billionaires' houses and vast green fields. It meshes these images with shots of those who did not support, or probably would not have supported, Mr Modi: praying Muslims, and the two deceased heroes of India’s independence movement, Jawaharlal Nehru and Mahatma Gandhi. Modi claims ownership of all of India now, even his foes. After decades of political struggle, he has transcended politics. Next, in response to a meticulous cue, a handful of blinking American Congressmen, who have been flattered or press-ganged into appearing, go on stage. They get a cheer: this may be the only place in the disunited states of America where that happens. The national anthems are sung: the Star Spangled Banner, first and with care, then India’s, with abandon.

And suddenly, just after mid-day, Mr Modi is standing on the same floodlit spot where Mick Jagger probably sang "Sympathy for the Devil". Mr Modi ignores the dignitaries completely: idiots. He looks around the crowd smiling, savouring it all. After riots in the state of Gujarat in 2002 in which at least a thousand people, mainly Muslims, were killed, Mr Modi, then the state’s chief minister, was banned from travelling to America. American officials called him a monster, a demagogue, a fanatic. Now they close down Manhattan’s streets for him, and America’s politicians stand here as his stage props. Sweeter still, Mr Modi’s acceptability is not a product of his remorse or decisive acquittal, but of his power: winning an election in a country of 1.25 billion people. He doesn’t let his anger or sense of triumph show, though. To get here, to the Garden, Mr Modi has spent decades roaring himself hoarse thousands of times before crowds of peasants in parched fields. Now it is time for some magnanimity, at least at first...

... “I have a dream,” he confides. By 2022 he promises every Indian will have a house. The pledge is significant for the implication that he will still be in power then.

Read the full piece at the Economist.com: I give you Narendra Modi

...the PM presented the clearest statement of a reform agenda that he has so far. Following on from his sarcastic reference to government being a “contractor” for India’s development, he said that “previous governments took pride in making one law after another”. That was, in fact, he said – in a clear dig at the rights-based schemes of the previous government – “their entire election campaign”. But, Modi added, “My plan is different. It is to get rid of all the old and useless laws.” He promised Indian-Americans, if they were to return to India to invest, that there would be “no more running from pillar to post to deal with the government… I tell you, those days are gone.”

“Ease of business” would be a priority, he said, using a rare English phrase. “If I can get rid of one law a day, then I’ll be the happiest of men.”...

But the reform promises were no doubt secondary as far as most observers and attendees were concerned. What was far more important was the fact of Modi’s presence in New York – the subtle irony of him offering easier visas to citizens of a country that had denied him a visa for nine long years was lost on few. The crowd – many of whom walked in waving large saffron flags – clearly saw Modi’s arrival as a fulfilment of a long-nurtured dream, and a source of ethnic pride. The presence of 41 members of the US Congress from Indian-heavy districts, who stood on stage waiting for him as if they were courtiers, only enhanced the symbolism of the moment; for Indian-Americans, it was a victory against an American establishment that had unfairly denied them their hero for a decade, and was now forced to acknowledge him in public.

Read the full piece at the Businessstandard.com: Modi plays the Garden