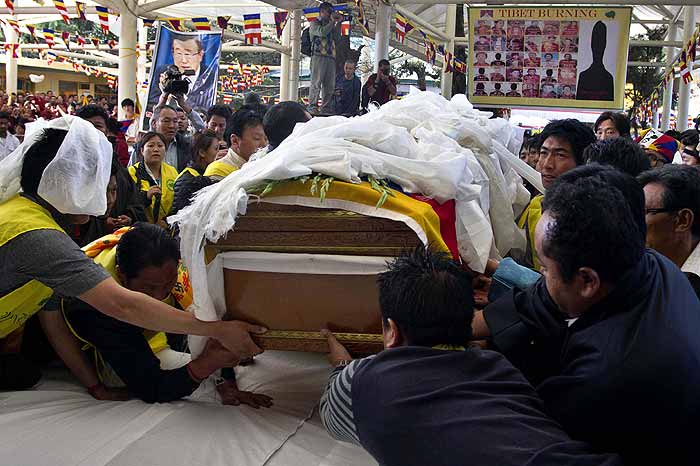 The body of 27-year-old Jamphel Yeshi, who died two days after he immolated himself in New Delhi in protest against the visit of China's president Hu Jintao for the BRICS summit

Mihir Sharma, in The Business Standard, says what badly needed to be said about the recently held BRICS summit:

Tibetans being rounded up, made to squat in the sun; the ever-sensitive Delhi Police indulging in the worst sort of racial profiling, demanding that people who look even vaguely Tibetan prove their credentials or be locked up. People of Manipuri descent wondered why they left home without their passports. Those living in dozens of Tibetan-dominated areas were cordoned off from the rest of the city like Palestinians on the West Bank. The Tibetan poet, Tenzin Tsundue, was bundled offstage by the cops after an academic discussion at the India Habitat Centre, and sent to Tihar.

Was there, perhaps, an even minimally credible threat to the life of Our Glorious Leader, Hu Jintao? No. Because the Tibetan movement has always been resolutely non-violent. Indeed, that has been India’s price for the grudging asylum we have provided them. In spite of that, the Chinese government had the gall to issue a statement thanking India for cracking down on Tibetans and finally recognising the “troubles” that they present. Given that any real law-and-order threat only exists in the deceitful newspeak of a totalitarian party, why has India’s craven government undermined its pretensions to democracy – and its only real argument for running a better state than China’s – by beating up and jailing its own, non-violent citizens?

Read on at the Business Standard