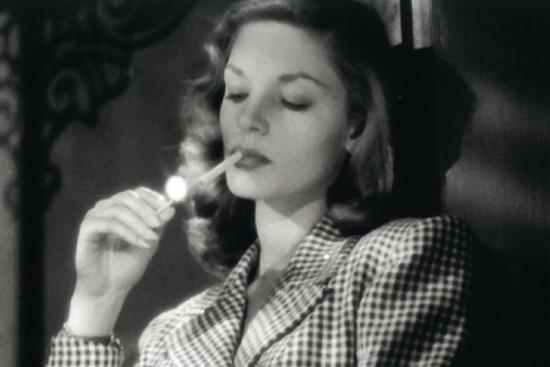 With deep sorrow, yet with great gratitude for her amazing life, we confirm the passing of Lauren Bacall. pic.twitter.com/B8ZJnZtKhN

Lauren Bacall (born Betty Joan Perske) was 89, but for the fans of classic Hollywood films, she would forever be remembered for her distinctive husky voice and sultry looks that were first heard and seen in her 1944 screen debut To Have and Have Not, when she famously met Bogart and "taught him how to whistle."

‘You don't have to say anything, and you don't have to do anything. Not a thing. Oh, maybe just whistle. You know how to whistle, don't you, Steve? You just put your lips together and blow.’

It has been rated the 34th greatest movie quote of all time by the American Film Institute.

Bogart, who was 25 years older than his seductive co-star and married at the time, divorced his wife a short time after the movie's released and married Bacall in Ohio in 1945.

When Bogart died from throat cancer in 1957, Bacall placed a whistle in his coffin.

Comedy roles in How to Marry a Millionaire (1953) with Marilyn Monroe and Designing Woman (1957) with Gregory Peck further cemented her place as an all-time great.

She worked on Broadway in musicals, gaining Tony Awards for Applause in 1970 and Woman of the Year in 1981. She won a Golden Globe for The Mirror Has Two Faces (1996) which also earned her an Academy Award nomination.

In 2009, she was selected by the Academy of Motion Picture Arts and Sciences to receive an Academy Honorary Award "in recognition of her central place in the Golden Age of motion pictures."