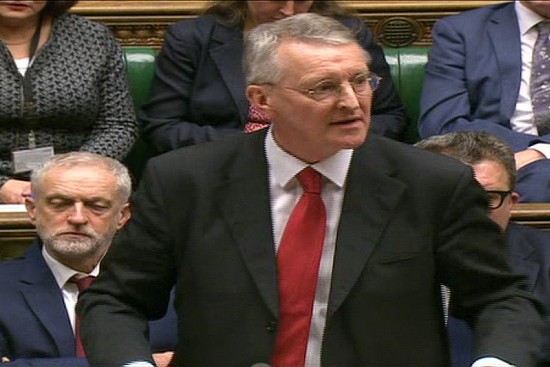 Labour MP and shadow foreign Secretary, Hilary Benn 's speech in the House of Commons in support of air strikes over ISIS territory in Syria and Iraq, created quite a stir and made even many of his own party members change their minds.

MPs voted in favour of the air strikes by 397 to 223 votes after a ten-hour long debate and apparently Benn's speech helped many of the Labour MPs make up their minds about a military intervention in Syria, depite Labour leader Jeremy Corbyn's wishes for the party to vote against air strikes.

This is what Benn had to say:

"... I hope the House will bear with me if I direct my closing remarks to my Labour friends and colleagues on this side of the House. As a party, we have always been defined by our internationalism. We believe we have a responsibility one to another. We never have and we never should walk by on the other side of the road.

And it is why, as we have heard tonight, socialists and trade unionists and others joined the International Brigade in the 1930s to fight against Franco. It’s why this entire House stood up against Hitler and Mussolini. It is why our party has always stood up against the denial of human rights and for justice. And my view, Mr Speaker, is that we must now confront this evil. It is now time for us to do our bit in Syria. And that is why I ask my colleagues to vote for this motion tonight.

This made many recall Hilary Benn's father Tony Benn's speech in the Commons from 1992 before a vote on whether to sell arms to Iraq, after the first Gulf War. Mhairi Black, the SNP MP for Paisley and Renfrewshire South and the youngest sitting MP tweeted the same."

Wise words, as relevant now as they were then. I will be voting against air strikes in Syria tonight. #syriavote https://t.co/Fq5hjdhLSM

"War is an easy thing to talk about. There are not many people of the generation that remember it here... I was in London in the Blitz in 1940.

What fools we are, to live in a generation, for which war is a computer game for our children, and just an interesting little Channel 4 News item.

Every member of parliament tonight that votes for the government motion will be consciously and deliberately accepting your responsibility for the deaths of innocent people, if the war begins as I fear it will.

The words of [the founding UN charter] are etched into my mind and move me even as I think of them. 'We the people of the United Nations determine to save future generations, succeeding generations, from the scurge of war which twice in our lifetimes has caused untold suffering to mankind.

That was the pledge of that generation, to this generation, and it will be the greatest betrayal of all if we vote to abandon the charter and take unilateral action and pretend we are doing it in the name of the international community."

SNP MP Alex Salmond later said that Tony Benn, would be "birling in his grave" upon hearing his son argue for bombing Syria in the House of Commons, birling in Scottish means spinning.

"His father, whose speech I heard in the Iraq debate all these years ago, would be birling (spinning) in his grave hearing a speech in favour of a Tory prime minister wanting to take the country to war and that’s just a reality."

Salmond has been criticsed for his statement by Tony Benn's granddaughter who said that she was deeply offended by the remark.