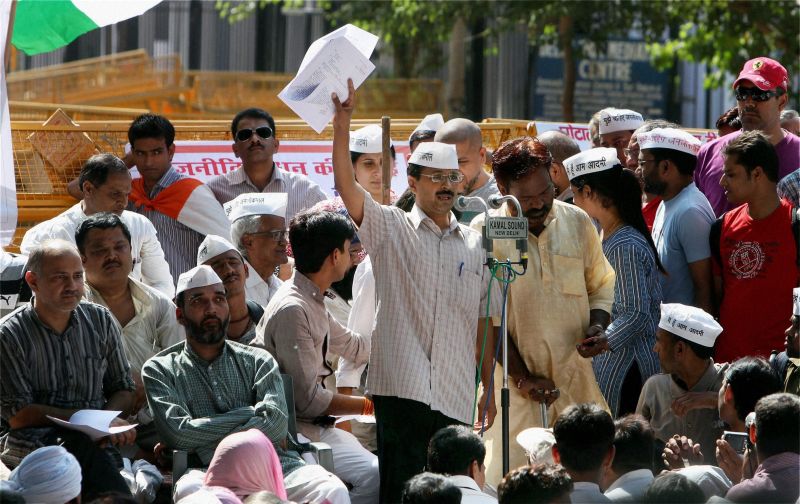 For those who came in late, the backgound:

Dr Zakir Hussain Memorial Trust, an NGO run by law minister Salman Khurshid and his wife Louise Khurshid, has been at the centre of many allegations of financial misappropriation and forgery that have been refuted by the law minister and his wife.

Arvind Kejriwal, sitting on a protest at Parliament Street police station, has been demanding Khurshid be arrested for alleged misappropriation of funds from the Ministry of Social Justice by his trust, quoting a CAG report which alleges “misappropriation of a grant of Rs 71.5 lakh, interest of Rs 15.49 lakh thereon and the irregular release of a further grant of Rs 68.25 lakh”.

According to the report, on the basis of recommendations of the Uttar Pradesh government, a grant-in aid of Rs 71.5 lakh was sanctioned to Dr Zakir Hussain Memorial Trust Delhi, as a non-recurring grant in 2009-10 for distributing aid and appliances under a scheme to be implemented in 17 districts across Uttar Pradesh.

4. Your organisation has claimed that you organised such and such camps for the handicaps in such and such districts and distributed equipment to them. According to an enquirty conducted by Akhilesh Yadav's government neither any such camps were organised on those dates nor any equipment was distributed. Do you agree with the charges levelled in this letter dated June 12, 2012 by the UP government?

5. The handicapped who your organization claims to have given equipment's to say that they did not receive any such things. If these people say these things in public, would you resign from your post in the Union Cabinet?

In response in a 100 minute long press conference, Mr Khurshid offered what he said was proof that the camps had indeed been held.

Mr Khurshid also released some photographs purporting to show that the very person Mr J.B. Singh, UP government's former CDO, who had claimed that an affidavit in his name presented by Mr Khurshid as praising Dr Zakir Hussain Memorial Trust, was a forgery, was present at one of the camps along.

In response, Me Kejriwal has claimed as follows:

"Salman Khurshid has refused to answer any of the five questions asked by us. All he has done is to show a photo in which he says J.B. Singh (the officer whose signature has been forged) is there.

We also want to know what our PM thinks in this matter.

If Salman Khurshid doesn't resign then we will field a handicapped person against him in 2014 and make sure that Mr. Khurshid loses," Arvind Kejriwal.

This image was released by Union Law Minister Salman Khurshid in a press conference as a proof of his honesty.

However, it is notable that the date on the banner in this image shows a date in July 2010 while the swindling of funds took place in the year 2009-10.

Can we believe on anything that Mr. Khurshid has said in the press conference?

Our Netas: A Day's Work