Kashmiris Are Angry, Yet They Are Calm. Why?

By abrogating provisions of Article 370, India has smartly shifted the goalpost in Kashmir from right to self-determination to demand for retention of special status, a political observer in Kashmir says. 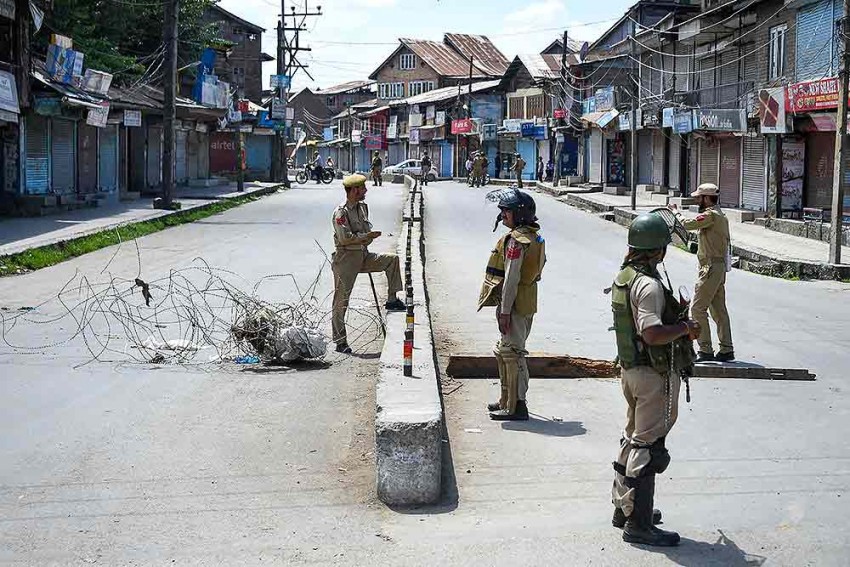 Security personnel stand guard at a check point during restrictions, after Centre abrogated Article 370 and divided Jammu and Kashmir into two union territories, in Srinagar.
Qadri Inzamam August 21, 2019 00:00 IST Kashmiris Are Angry, Yet They Are Calm. Why? 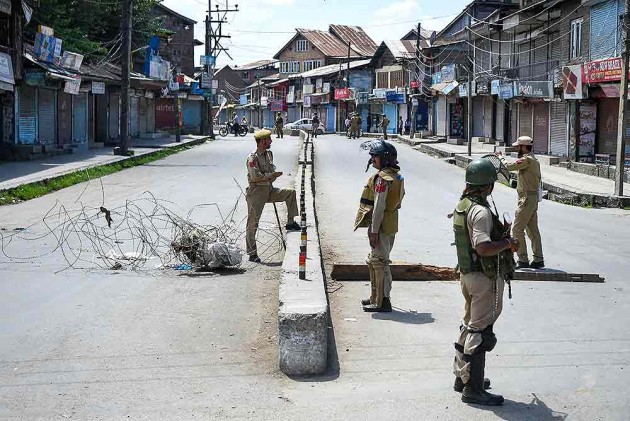 Every intersection in Srinagar's downtown or Sheher-e-Khaas is manned by a contingent of Central Reserve Police Force (CRPF), with a token presence of local police. The movement of people is strictly restricted. Even journalists with press cards or curfew pass struggle to cross the roads clogged with barricades and razor wires.

Srinagar’s old city still preserves Kashmir’s heritage and antique architecture. But of late, the mere mention of downtown evokes an image of violent protests in its complex labyrinth of lanes and bylanes.

Prior to stripping Jammu and Kashmir of its special status and bifurcating it into two union territories, the central government sent more than 35,000 additional central armed forces to the erstwhile state. The government feared violent reprisals. Hence, the reinforcements were airlifted to J&K.

But downtown is mostly and strangely quiet. Barring a few protests and clashes between youth and security forces here and there, the old city has not witnessed any major protests -– something which baffles even the people living in Sheher-e-Khaas. A similar spooky silence prevails in rest of the Valley.

There is not just one factor that explains Srinagar’s or the entire restive Valley’s unprecedented quiet bearing.

‘Kashmir Has Been Rendered Leaderless’

In the summer of 2017, the National Investigative Agency (NIA) launched a crackdown on several separatist leaders and activists in Kashmir. High-profile separatists from both Hurriyat Conferences – led by Syed Ali Shah Geelani and Mirwaiz Umar Farooq – were questioned and subsequently arrested in terror-funding cases. The following months saw many other activists of Hurriyat Conference and Yasin Mailk-led Jammu and Kashmir Liberation Front (JKLF) being arrested on similar charges.

Enforcement Directorate (ED) tightened its noose around other separatists, including Shabir Shah, for allegedly generating funds from Pakistan to fuel protests in the Valley.

With most of the key separatists behind the bars, the separatist camp received a major setback in its operations.

After the February 14 Pulwama attack, the Centre banned Jamaat-e-Islaami, a socio-politico and religious organisation that has deep ideological roots in Kashmir. Jamaat’s religious, social and political preachings have had a deep influence in the Valley which is dominated by Muslims.

In Kashmir’s recent political history, Jamaat emerged as an ideological front for the Hurriyat Conference. It has been a primary proponent of the right to self-determination in Kashmir. Following Pulwama attack, the Ministry of Home Affairs said that it banned the Jamaat for its association with militant groups, for supporting the secession of Kashmir from India and indulging in anti-national activities. Hundreds of its leaders and activists were arrested and lodged in different jails in and outside J&K.

A political observer in Kashmir, who wished not to be named, said that given the Jamaat’s influence, its members have a potential to mobilise people. “With Jamaat-e-Islami members and activists in jails, there is no one to mobilise people,” he said.

Hours after Home Minister Amit Shah announced in the Parliament on August 5 the decision to abrogate Article 370 in Jammu and Kashmir, the government arrested three former chief ministers, several politicians and political activists. Members of civil society and J&K Bar Association were also taken into custody, some of them even shifted outside the Valley.

“The government does not want anyone to mobilise mass protest. Anyone with a potential to lead people or anyone who has some influence over people or has a lead character is in jail or under house arrest,” he says, adding that, as such, mass protests like 2008, 2010 or 2016 are unlikely to recur this time.

"The central government has rendered Kashmir leaderless. There is no one to rally behind.”

On August 9, first Friday after Centre’s decision, thousands of people rallied in Soura area on the outskirts of Srinagar against the move. BBC was the first to report the protest march that was met with teargas shelling, pellets and aerial firing by the security forces. Some locals confirmed that thousands of people participated in the protest rally.

But the protests did not seep out of the area. Other parts of Srinagar did not witness such protests, except pitched battles at few places between youth and security forces.

With heavy troop deployment that restricts the movement of people and a communication blackout, the news of protests did not reach other parts of Kashmir, preventing further escalation.

On August 15, a group of boys perched on a shopfront in Budgam’s Chadoora town, 14 km from Srinagar. The road that wore a desolate look bent into a contingent of CRPF personnel and then halted by a roadblock and an armoured vehicle.

“These CRPF (personnel) are everywhere. There are more troops on roads than civilians. How can anyone even imagine holding a protest!” said 23-year-old Ajaz Ahmad.

Ajaz said people were in shock and disbelief over the abrogation of provisions of Article 370. “When I watched the news on TV, I didn’t believe it. Abrogation of Article 370 was passed as just a rumour a few weeks ago. But they actually removed it (special status) in one stroke. It has shocked people. People are yet to accept it,” he said.

Ajaz is joined by another youth, Mudasir, a student of arts in Amar Singh College, Srinagar. Mudasir said the government has acted “smartly” in containing any possible protests.

“The entire Valley is under curfew. Phone lines are disabled. Internet is down. Thousands of youth have been arrested. Roads are full of troops. Localities have been dismembered from each other. As such, who will dare to come out and protest?” Mudasir said.

“India has quarantined Kashmiris. They have played smart.”

When Burhan Wani, a militant commander affiliated with Hizbul Mujahideen, was killed in July 2016, at least 16 protesters were killed in just two days following his death. The protests had spread like wildfire and had caught the government unawares. South Kashmir, where Wani hailed from, witnessed the most killings and most violent protests.

This time, however, entire south Kashmir is quiet. Pulwama district, which has witnessed frequent incidents of stone-throwing in past, exudes a feeling of ruination. Roads are strewn with armed forces, punctuated with check-points and choked with armoured vehicles.

In Kakpora village of this district, an engineering student, who identified himself as Shahid, said that the anger is brewing among people. “Do you think people are going to keep calm? Kashmiris always react to what goes against their will. This is something far more serious than ever. They will definitely react,” he said.

Shahid said that Kashmir right now is a “cauldron of brewing anger” that may explode anytime.

“That adage ‘Calm before the storm’, that is what it is. I feel like the entire Valley is a cauldron of brewing anger. This anger will find its way out. If it doesn’t, it will lead more people to militancy. People need a vent,” Shahid said.

“How long will this curfew last? As soon as they (the government) lift the curfew, this ticking time bomb will go off.”

The political observer quoted earlier said the abrogation of J&K’s special status does not make much difference, except a change in the political discourse in Kashmir.

“People in Kashmir valley have been fighting for the right to self-determination. Now all of a sudden, they are fighting for special status and statehood. The Indian government has cleverly shifted the goalpost,” he said.

The uncanny silence prevailing in the Valley is difficult to decipher. People and the administration are equally clueless about what will unfold next.

Indian Armed Forces, Civilians Continue To Bleed In Internal Conflicts, But Do We Care?