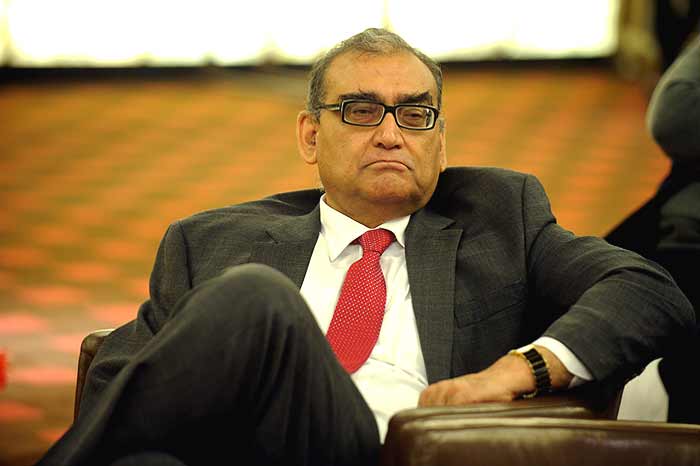 Justice Markandey Katju, chairman of the press council of India, who used to routinely quote from the "website Google" in his Supreme Court judgements, or cite Wikipedia as an authority, is no stranger to mathematical exactitudes such as: “90 per cent of Indians are fools”,  "90 per cent vote on the basis of caste or community",  "90 per cent Indians believe in astrology", "The real problems facing 80 per cent of the people are socio-economic" or "80 per cent of our people are poor" [though to be fair, he has later at least once been made to concede that the figure might be 85 per cent, on the other hand it could be 95 per cent]. Which is why we were rather intrigued when the Hindu's editor Siddharth Varadarajan tweeted earlier today:

Our investigations revealed that on September 3, Justice Katju had written an article in the Hindu, Professor, teach thyself , in which he, inter alia, went on to say:

The level of intellect of many teachers is low, because many of them have not been appointed on merit but on extraneous considerations. To give an example, when I was a judge of Allahabad High Court I had a case relating to a service matter of a mathematics lecturer in a university in Uttar Pradesh.

Since the teacher was present in court I asked him how much one divided by zero is equal to.

I told him that his answer was incorrect, and it was evident that he was not even fit to be a teacher in an intermediate college. I wondered how had he become a university lecturer (In mathematics it is impermissible to divide by zero. Hence anything divided by zero is known as an indeterminate number, not infinity).

We reproduce the letters in response linked by Mr Varadarajan in his tweet:

While I can understand the plight of the poor lecturer who did not have the courage to correct the judge hearing his case, I am appalled at the timidity of “some of the top senior academicians” of Jawaharlal Nehru University, to whom Justice Katju narrated the incident. I wonder why they let his fallacy pass unchallenged. Justice Katju must seek out the mathematics lecturer and apologise to him.

I would like to digress from the primary point made in the article — with which I completely agree — and talk about the mathematics lecturer’s answer. “Infinity” is indeed the correct answer to the question posed by Justice Katju to the lecturer. 0/0 is indeterminate because it can take multiple values depending on the limit being calculated (for example 2x/x; x->0 is 2 , 5x/x; x->0 is 5) whereas any finite number divided by 0 (eg 1/0) is an impermissible operation, which is just another way of saying that the result is infinite (an absurdly large number).