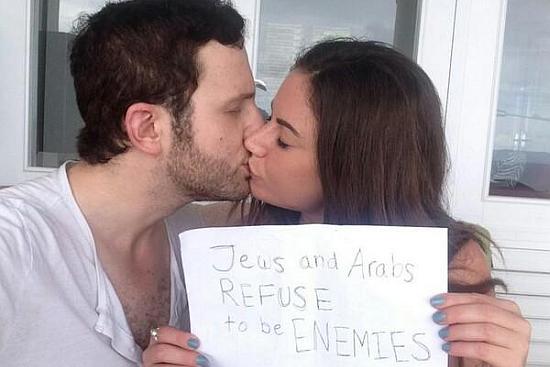 While a war rages and the world tries to come to grips with the violence let loose by Israel on Gaza, a photograph of a Lebanese journalist kissing her Jewish boyfriend has gone viral.

The picture shows Sulome Anderson, the daughter of Terry Anderson, the former Middle East bureau chief for the Associated Press and her American-Israeli boyfriend kissing.

The photograph was posted in response to a social media campaign called: “Jews and Arabs refuse to be enemies" -- #JewsandArabsRefuseToBeEnemies -- launched by Abraham Gutman and Dania Darwish, both students at Hunter College in New York, shortly after the Israeli military launched Operation Protective Edge on Gaza on July 8

The campaign has prompted many similar images to be posted to social networking sites.  We present a selection: