It started with this newsreport in the Indian Express (also reproduced in the group's Financial Express) about the goings-on at one of the country’s oldest and most respected media companies, Kasturi & Sons Ltd, the publisher of the 132-year-old English newspaper The Hindu and business daily The Hindu Business Line:

The report went on to allege:

According to the faction opposed to Ram, all members at the meeting agreed to the proposal and Ram, who turns 65 this May, was identified as the first member to step down from the board followed by Murali and N Ravi, who will turn 65 in August 2011 and 2013 respectively.

Read more at the Express

The Hindu used to be edited by G. Kasturi from 1965 to 1991. The power-struggle in the extended family is said to go back to this period. On his retirement, Deputy Editor N. Ravi, N. Ram's younger brother, replaced G. Kasturi as Editor. N. Ram was given independent charge of Sportstar and Frontline. Nirmala Lakshman, Kasturi Srinivasan's granddaughter, became Joint Editor of The Hindu and her sister, Malini Parthasarathy, Executive Editor. There was a change at the helm once again in 2003 when N. Ram took over the editorship of The Hindu on June 27, 2003.

The Express report also mentions that Murali, Ravi and Malini Parthasarthy questioned the appointment of two family members in the company by N. Ram " without the board’s consent and proper governance norms"-- Narayan Lakshman, son of Nirmala Lakshman; and Vidya Ram, N.Ram's daughter. It also goes on to allege that the trio "also pointed out several alleged financial irregularities in the way in which Kasturi’s resources, financial as well as editorial, were used to further the interests of some board members".

The paper did, however, also give Mr N. Ram's version of the events. N. Ram hit back soon thereafter, as the Hindu website announced: 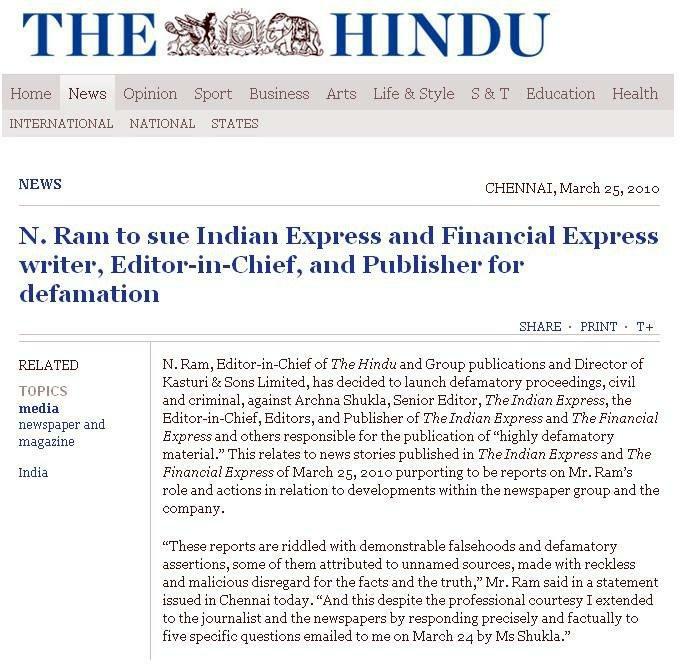 “These reports are riddled with demonstrable falsehoods and defamatory assertions, some of them attributed to unnamed sources, made with reckless and malicious disregard for the facts and the truth,” Mr. Ram said in a statement issued in Chennai today. “And this despite the professional courtesy I extended to the journalist and the newspapers by responding precisely and factually to five specific questions emailed to me on March 24 by Ms Shukla.”

Read more at the Hindu

Following are some of the interesting tweets that soon ensued from some of the dramatis personae: 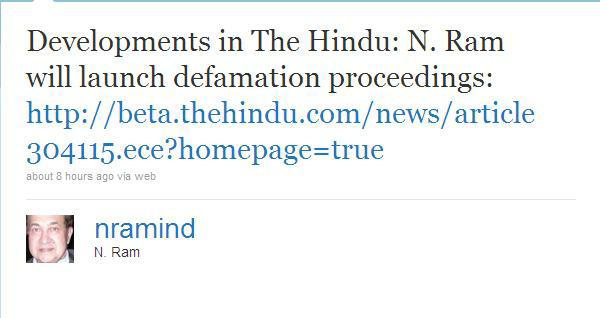 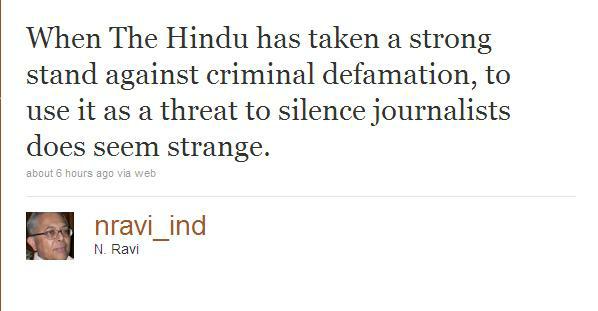 Malini Parthasarthy retweeted the above and also chipped in:

Incidentally, Malini Parthasarthy not only retweeted N. Ravi’s tweet above but also another one: "Word is that NRam wants Venugopal as editorinchief & Nirmala as editor instead of Ravi & Malini."  The latter being from none other than Aditya Sinha, the Editor-in-Chief of The New Indian Express (Ironically, a result of another family split, following the death of Ramnath Goenka), the Hindu's rival paper in Chennai, who seemed to be having a bit of fun and feeding grist to the rumour mills: 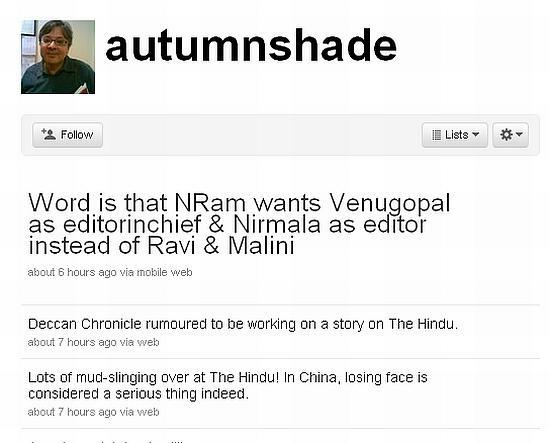 The Deccan Chronicle is a Hyderabad paper with a Chennai edition. And one should not miss the  reference to China.  An SMS, doing the rounds through the day was the old joke when Mr Ram took over the Hindu: "Rumour has it that it has been unofficially renamed as the People's Daily of Chennai."   It was countered by another one that just said: "The American Express?"

N. Ram says There can be no defence, in law or intelligent discourse, for these demonstrable falsehoods that defame recklessly http://bit.ly/d5ZZRH | 2:17 AM Mar 26th   and adds: 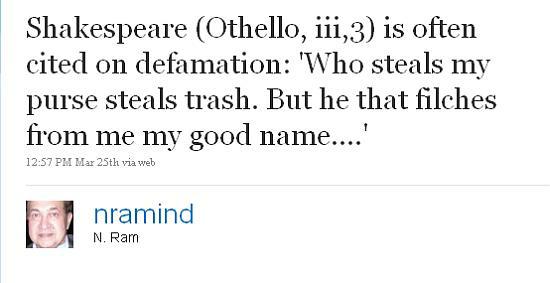 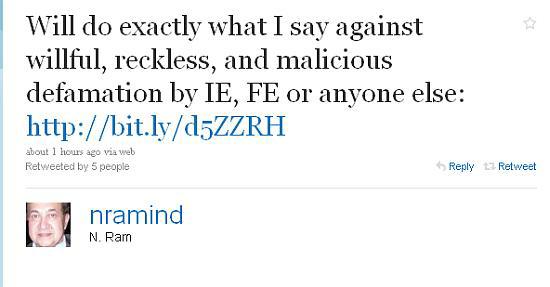 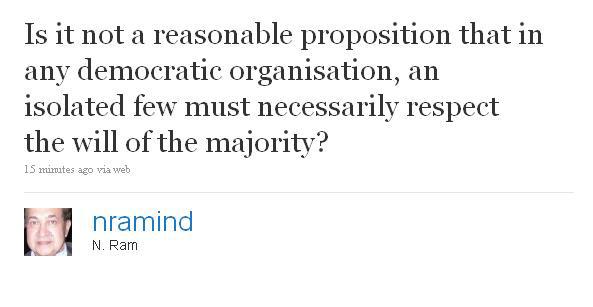 The Indian Express responded to Mr Ram's threat to sue, which it carried equally prominently on its front page:

“The report, ‘Battle for control breaks out in The Hindu very divided family’, (The Indian Express, The Financial Express, March 25, 2010) is based on information received from multiple and high-level credible sources.

“All facts were verified and cross-checked to the highest standards of accuracy and fairness that The Express Group holds itself to. We believe our report was neither malicious nor defamatory.

“We have great regard for The Hindu as an institution and for its Editor-in-Chief N Ram as a journalist and editor for their commitment to principled journalism.

“We stand by our report and the reporter.”

And went on to add more details: The Hindu war in the open: Ram strips Murali of powers, he says won’t quit

Stripped of his powers by publisher and group Editor-in-Chief N Ram, Managing Director and his brother N Murali has hit back saying that he will not quit. And that he would try to “make Ram see reason and retire as Editor-in-Chief as committed by him in September 2009 and ensure a smooth transition.”

Ram, incidentally, has denied that he made such a commitment.

“Some members of the Board of Directors have been trying to systematically undermine and erode my authority and responsibilities and rights and obligations,” Murali wrote in an email to “colleagues” in the company today. “I will not allow that to happen.”

That was not all. The Express story went on to quote a purported letter to the Kasturi board-members from Murali’s children Kanta and Krishna and Ravi’s daughter Aparna protesting the appointment of Narayan Lakshman and Vidya Ram in senior editorial positions in the US and Europe:

“It is essential that the Board considers issues of corporate governance and the appointment of family members seriously. To point out the obvious, the business cannot accommodate every member of the family, particularly when there are no institutional mechanisms in place to prevent the receipt of unjustifiably large entitlements over a long period of time. Each of us, whether in the previous, current or next generation, has received and continues to receive tremendous benefits from Kasturi and Sons, which far outweigh those received by non-family employees. It is high time that we recognize that our privileges are derived primarily from the contributions and loyalty of over 3500 non-family employees. Each one of us has, in some way or the other, abused their loyalty, trust and contribution.

“The inequitable and arbitrary system that currently exists is not only unfair to non-family employees but to shareholders as a class as well. If there is ever any intention of instituting sound and modern corporate governance practices and discontinuing the feudal system that exists, then issues such as the ones we have raised need to be addressed squarely, honestly and without fear or favour.” Read the full Indian Express report:

This should of course be read in light of the Express reporter Archna Shukla’s emailed question to N. Ram in which she asked:

I am told that Mr Murali was opposed to the induction of the children of some of the family members hired at very high salaries and that led to unpleasantness among members and finally, his ouster. Is this correct?

Totally wrong, as the written record will show. Any appointment of a relative of a Director that needed approval by both the Board of Directors and Shareholders before going to the central government was approved unanimously, without a murmur of dissent by any Director or Shareholder.

Every one of the 12 Directors of the Company approved every such appointment. To describe the relevant salaries as “very high” would be laughable; in fact, if the precise numbers were revealed, the salaries or remuneration would be characterised as “rather low.” They are similar to what other foreign correspondents of our newspaper Group get. More here

Later, on Twitter, in response to a question: @malinip also, the issues on which the fight is happening, are they ideological or mostly administrative like IE suggested?, Malini Parhasarthy replied:

@ssudhirkumar I think many latent issues relating to management of newspaper have come to the surface, including editorial direction

Cryptic. Surely she does not mean the supporters of the Deputy Chief Minister of Tamil Nadu?

Talking of which, in other news, the Editor-in-Chief of The New Indian Express, Aditya Sinha, reported again via Twitter:

Who's That In Obama's Pocket?