ISIS At Your Doorstep? Sing A Song! 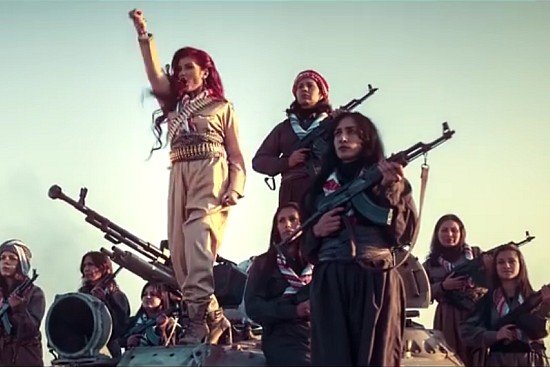 ?Everyone appears to be quite excited by a report in USA Today that cites an alleged Islamic State recruitment document that details Islamic State's ambitions in India. The Indian government and experts have downplayed fears of an Islamic State foray into India.

?To see just how much of a phenomenon the ISIS has become, consider ?Helen Abdulla?. The 'Kurdish Shakira' who goes by the stage name Helly Luv is boldly taking on the ISIS militants with her music. Her ?latest video is shot ?apparently 3 km away from ISIS militants.

It has put the spotlight on the ?ethnically Kurdish soldiers (Peshmergas) fighting the militants on the ISIS frontline. The 7-minute chart buster has already got some 1.5 million views on YouTube.

?In the title track "Revolution", she tries to instill hope in a Iraqi territory ravaged by war and terror.

?I?t ?has been a remarkable journey for this Kurdish Iraqi girl who was born in Iran (her family had reached there to escape Saddam Hussein's persecution of Kurdish minority). Now she's a chart-topping Los Angeles based artist.

She urges her people to:

Rise up, cause we are so much stronger as one. Breaking the silence as loud as a gun
Brothers and sisters we all come from one, different religions, we share the same blood