Someone, who might have been fond of inertia, invented this garment in praise of the laziness and handed it over to Kashmiris who are loving it. 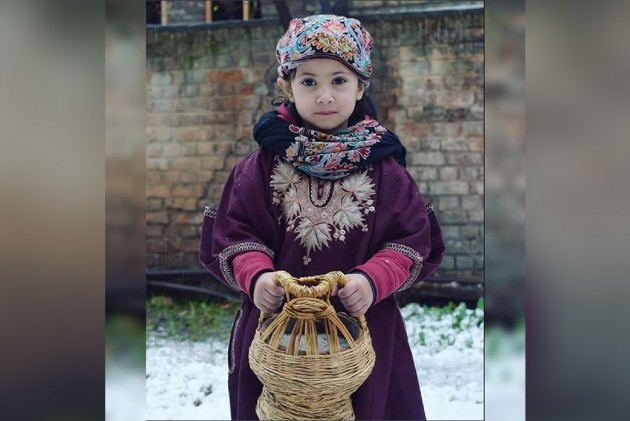 There are many myths around the Kashmiri pheran. While some believe it was Mughal emperor Akbar who introduced the long garment in the Kashmir Vallery, others believe pheran came from the Persian travelers who invented the garment to protect themselves from the freezing cold during winters.

But the popular belief is that Akbar introduced the garment to tame the brave Kashmiris and make them addicted to a lazy lifestyle after he conquered Kashmir on October 6, 1586.

Kashmiris didn’t allow the mighty Mughal army to enter the Valley and fought them gallantly, Akbar offered friendship to the then Kashmiri king Yusuf Shah Chak and invited him to Delhi. When the king went to Delhi, he was arrested and sent to prison in Bihar, where he died and was buried. With the king out of the Valley, it was easy for the Mughal Army to capture the land and ensure that Kashmiris remain tied to the pheran.

Whatever the theory, the pheran really gives a feeling of slowness and one wants to prolong such feeling in these times. Someone, who might have been fond of an inertia, invented this garment in praise of the laziness and handed it over to Kashmiris who are loving it. In his book ‘The Valley of Kashmir’, Sir Walter Lawrence blames Akbar for inventing this garment. Lawrence was the Settlement Commissioner for Jammu and Kashmir during 1889-94.

British missionary and educationalist Tyndale Biscoe in his ‘Kashmir in Sunlight and Shade’ has this to say about pheran: “When the Afghans conquered Kashmir they forced the men to wear the same dress as the women, to be in keeping with their character.” Kashmiris are not fond of Mughals or Afghans or those who came after them. But their love for the pheran has grown manifold.

Pheran is part of the Kashmiri culture, and politics too. Only yesterday when two senior PDP leaders deserted their party to join the National Conference, they came in designer pherans. Dr. Farooq Abdullah, his son Omar Abdullah and others were also in brand new pherans to welcome the entrants. When Prime Minister Narendra Modi came to address people in Kashmir in 2016, he was wearing a pheran. In fact, there are many politicians who have pictures in pheran. Only exceptions were Pandit Jawaharlal Nehru and Sheikh Mohammad Abdullah. At least, I have not come across any of their photos wearing a pheran.

Pheran is a long garment. Kashmiri males, females and children wear it. The traditional pheran is long one, below the knees. But modern variations of it are shorter and smarter. Under a pheran you can keep Kashmiri firepot called kangri. It reflects historical continuity of Kashmiri culture as they have not made any drastic changes in the garment. If a person from 15th century suddenly wakes up in the streets of Srinagar today, he would definitely identify pheran as something that belongs to his era.

That is why the recent decision of the government to ban the garment in the zonal educational offices and the civil secretariat created such an uproar. It was seen as a racist move. Although the government revoked the order quickly, it has not yet cooled down the tempers.

From California to Singapore, Kashmiris started posting their pictures in pherans to express their resentment against the ban order. Kashmiris, both men and women, from different parts of the world are posting their selfies on Twitter, Instagram and Facebook wearing beautiful and colourful pherans.

The garment is also a witness to the recent troubled history of Kashmir. In the early 1990s, parents would insist their children, especially teenagers, avoid pheran when they step of the house as militancy thrived under its cover. Militants would transport weapons under the pheran. The forces were paranoid about anybody wearing pheran. Whenever they would see a person approaching in pheran they would get alert and ask him to take it off.

Militants would use the long garment to hide AK-47. But Hizbul commander Burhan Wani changed it. Militants no longer hide the guns under pheran, nor do they use any pseudonyms. However, whenever the history of Kashmir insurgency will be written, the role of pheran cannot be ignored.