In a few months or a few years, it will become normal to see females of menstruating age in the temple. Those who are currently angry over the defeat of tradition will lose their anger over time. 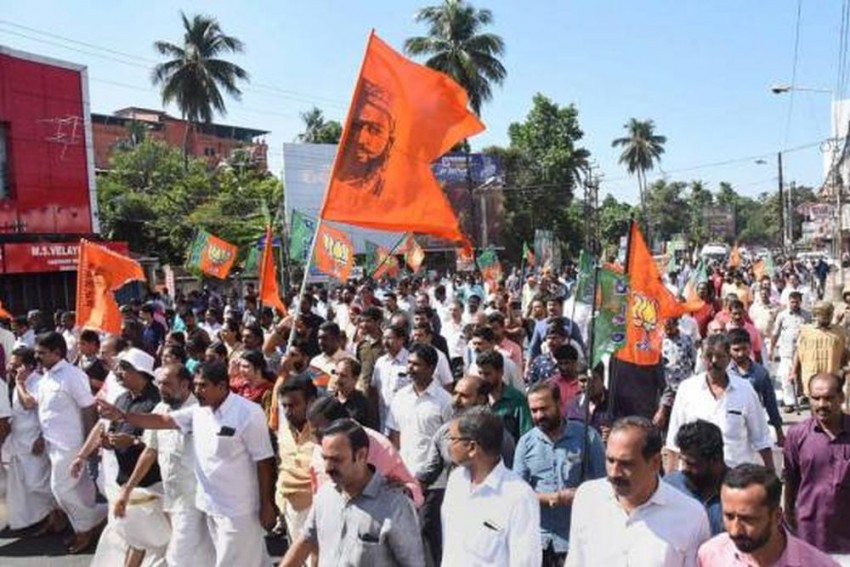 BJP activists stage a protest march against the entry of two women of menstruating age into the Sabarimala temple of Lord Ayyappa, in Kochi.
PTI Photo
Aakar Patel January 06, 2019 00:00 IST Sabarimala Issue May Help BJP Grow In Kerala But Social Reform Is Inevitable 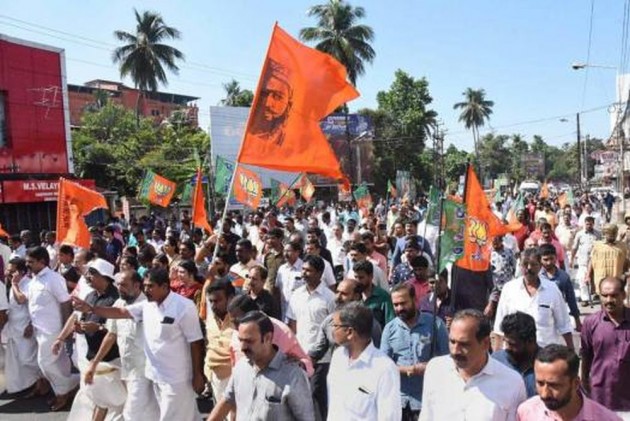 In 2016, Kerala elected Pinarayi Vijayan-led Left Front to power. The Congress was defeated and lost 7% of its vote share. But the Left also lost about 2% of its votes. The gain in votes was made only by one party, the Bharatiya Janata Party (BJP). The BJP's vote share went up by 9% and more than doubled its previous share of Malayali votes to a total of 15%.

This was a big jump and very encouraging but the BJP has been doing this across the country for many decades. In Gujarat, the Jana Sangh (which was the former name of the BJP) got only 2 to 3% of the votes till the mid-1970s. But the party leadership continued to strive and work and build the organisation without expectation of personal reward. The Emergency and then, the Ayodhya movement, gave the Jana Sangh and the BJP an opportunity to mobilise and it grabbed it.

One can rightly accuse the party of using religious issues and divisions to achieve political ends but one cannot accuse it of failing to achieve them.

Readers will be aware that the Rashtriya Swayemsevak Sangh (RSS) and the BJP have done something similar in Kerala, though, in this instance, the growth has been accompanied by great violence. Many people from the RSS and BJP and the Left parties have been killed as the fight for dominance at the neighbourhood level has become ugly.

The BJP won only one seat in the 2016 election, but in the next election, it will finally be established as a major player in that state. The party’s aggressive use of the Sabarimala issue has definitely helped it to attract a significant part of the upper caste vote which is angry over the Supreme Court decision to allow all Indians to access the temple.

However, the ultimate victory here will be that of the women and those people who back the rights of the individual over the rights of tradition. It was reported that three women accessed the shrine in the last few days. This will swing things in favour of the reformists. So long as no females were allowed to pray there, the strength of emotion kept the issue burning.

As more and more women do this, the matter will fade.

We have seen the same thing over the same issue happen in India before. In the 1930s, the issue was whether or not to allow Dalits into temples. Mahatma Gandhi was opposed by Hindu right-wing groups which organised dharnas against him for supporting the entry of Dalits.

In Ahmedabad, the Swaminarayan sect which is run primarily by the Patels of my community, declared themselves non-Hindu to keep the Dalits out. They did this to claim that the Bombay Harijan Temple Entry Act was not applicable to them.

But of course, we know that such things cannot work. Ultimately, we cannot discriminate in the name of tradition and the right thing always prevails in the course of time.

The Patels kept fighting against the entry of Dalits into temples but lost in the Supreme Court. The judges observed that “The Harijans right to enter temples symbolises the right of Harijans to enjoys all social amenities and rights, for social justice is the main foundation of the democratic way of life enshrined in the provisions of the Indian Constitution.”

Today, this observation seems normal and nobody can take exception to it.

Something similar will happen in Kerala. In a few months or a few years, it will become normal to see females of menstruating age in the temple. Those who are currently angry over the defeat of tradition will lose their anger over time. Those who wanted to keep Dalits out are today nowhere to be found. They have not vanished but their views have changed and our society has changed. Today, nobody can claim that tradition should prevail over individual rights to keep Dalits away from temples.

In time, we will be surprised that even in 2019, we were fighting over such an issue as the entry of females into temples.

In that sense, the defeat of tradition will help the BJP politically in the short run. But it will help us as a law-abiding and rights-respecting society in the long run.

From Bollywood To South India, What Made Kader Khan A Darling Of Film-Makers