National Rahul's Interaction With Migrants Led To Predictable Political Storm, But What Have His Critics Done?

Rahul's Interaction With Migrants Led To Predictable Political Storm, But What Have His Critics Done?

It is true that Nirmala Sitharaman and Mayawati’s attack against Rahul Gandhi is misdirected and neither of them or any other frontline political leader has made the effort to personally reach out to the lakhs of migrants who have hit India’s national and state highways in their long. 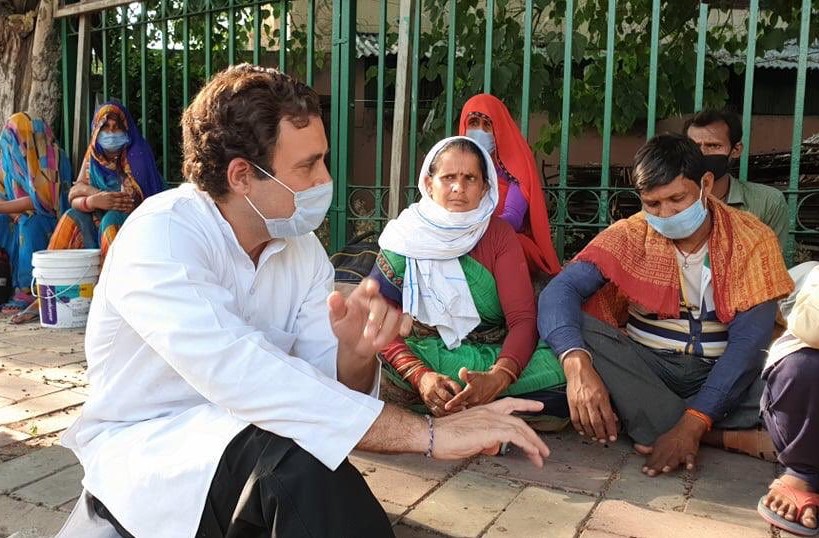 Congress leader Rahul Gandhi on Saturday released a 17-minute short film showcasing his recent interaction with migrant workers from a village near Jhansi in Uttar Pradesh who had walked over 100 km from Haryana’s Ambala town to reach Delhi. The workers had spent past two months in Ambala, where they had taken up work. Unable to pay their monthly rent of Rs 2500-3000 or feed themselves and their families, the workers began their journey on foot to get back to their native villages when the lockdown was extended for the third consecutive time.

Rahul’s encounter with the migrants happened on May 16 when the workers were crossing Delhi’s Sukhdev Vihar locality. For nearly an hour, Rahul heard the “incredible story of grit, determination and survival” that the migrants shared with him. The Wayanad MP then directed his party’s Delhi unit and members of the Indian Youth Congress to arrange transportation for the migrants and ensure they had enough ration to run their household once they reached their village.

A predictable political storm erupted over Rahul’s interaction with the migrants. An agitated Nirmala Sitharaman had a raucous breakdown some days later when a journalist questioned her about the plight of the migrants and Rahul’s interaction. Sitharaman lambasted the Congress leader for his 'dramebaazi' and said Rahul had wasted the time of the workers by sitting them down and would have done better to walk with them instead help carry their luggage too. The BJP’s reaction to Rahul’s 17-minute-long video has been no different. BSP chief Mayawati too has been caustic in her remarks against Rahul and his sister Priyanka Gandhi Vadra whose offer to provide buses for transporting UP’s migrant workers back home was spurned by the state’s Yogi Adityanath government.

At the face of it, it can’t be disputed that Rahul’s attempt at reaching out to the migrants to understand their grievances and help them was the least humane thing expected from a political leader. It is also equally true that Sitharaman and Mayawati’s attack against Rahul is misdirected and neither of them or any other frontline political leader has made the effort to personally reach out to the lakhs of migrants who have hit India’s national and state highways in their long, painful walk to home. Even the customary photo op that politicians routinely scout for, when citizens die in road or rail mishaps, were given a pass when 16 migrant workers were run over by a train or 25 others killed in a road accident over the past fortnight.

Also Read: Can Rahul And Priyanka's Visible Solidarity With Migrants Propel Congress Back To Glory?

The migrants who received Rahul’s help appear eternally grateful to the Congress leader for standing by them in their hour of need, as is evident from their videographed testimonies in the short film. At the risk of sounding insensitive, it can also be said that the migrants could express their gratitude to Rahul by voting for the Congress when the time comes and urging their peers to do the same.

However, it isn’t the immediate impact of Rahul’s interaction and short film that should be a matter of applause, debate or consternation. The 60-day lockdown has exposed harsh realities about an India everyone knows exists but prefers not to acknowledge. The hardships that migrant workers spoke to Rahul about – lack of a life of dignity, exploitative masters at work, poverty, government apathy, the rich-poor divide – are issues that did not spring out suddenly from the lockdown. It wasn’t the Coronavirus that plummeted lakhs of migrant workers into destitution. The virus of abject poverty claims lakhs of lives each year through different strains. Distress migration and reverse migration due to financial hardships and joblessness have existed for decades; marginally waxing and waning on occasion but never absent.

The reason why the current exodus of migrants is suddenly tugging at the nation’s collective conscience is, perhaps, because those this mass worked for – as domestic help and drivers for middle and upper classes, as construction labourers for real estate developers, as rickshaw pullers, auto and bus drivers in bigger cities – now find themselves with no one to lord over. With the lockdown forcing everyone with the slightest of privilege and entitlement to stay indoors and the humanitarian crisis triggered by the migrants providing a steady stream of content to print, electronic and new media, the average middle class or upper class citizen has to perforce take note of these stories of hardships.

When a migrant tells Rahul that there is no value attached to workers like him, the Congress leader rightly says that “there is value because it is you who do the work”. In his media briefings and social media posts, Rahul and his colleagues assert that the migrant workers are the “backbone” of India. True, the migrant worker would be glad to hear a powerful politician acknowledge his worth and contribution in nation-building, more so if this expression of confidence is backed with visible help and support. But what next and what for the lakhs of other migrants who weren’t lucky enough to be at the Sukhdev Vihar flyover on May 16?

Here, at least in part, Mayawati is right in blaming the Congress party for the distressing state that the migrants find themselves in, even if she herself has done little to help the same lot of people when she could. The BSP supremo claims that the Congress, which ruled much of India for decades since independence, did not do enough to create job opportunities uniformly across towns and villages which forced people to look to other states and big cities for employment. This is a simplistic narrative and in no way does it comprehensively explain the root cause of distress migration. Yet, it is also true. Mayawati, however, would also do well to look at her own multiple stints as the Chief Minister of Uttar Pradesh and the little that her governments did to create employment for the people, particularly the Dalits who she claims to represent politically. The Congress has been a fringe player in UP politics for over three decades now and much of the blame for the pitiful condition of the financially backward people of the state must be shared equally by the BSP, BJP or SP.

Similarly, every political party or coalition that has ever ruled any state or at the Centre has rarely ever done even the bare minimum required to create sustainable jobs in situ as the first step towards reducing migration. The MG-NREGA, implemented nearly six decades after independence by a Congress-led central government and now the safety net offered by the BJP for the poor can in no way be hailed either as timely or as sufficient government intervention for alleviating financial problems of the poor.

Rahul’s outreach would mean little if his party’s governments in Rajasthan, Punjab, Chhattisgarh, Puducherry or in states like Maharashtra and Jharkhand where the Congress is a partner in the ruling coalition do not see the current crisis as a belated wake-up call for urgent and drastic government intervention to address the issue of distress migration and employment. The poignant stories of the migrants that Rahul has now shared will be reduced to a political stunt if his party doesn’t see them as an opportunity for course correction. As for the BJP or other parties critical of the Congress, simply blaming the Grand Old Party for the current crisis cannot be a solution – Rahul met the migrants and got his colleagues to help them, what did you do?