The basest of criticisms against her start and end with a direct attack on her caste. The saner ones cite the allegations of wide-scale corruption, an extravagant display of her birthday celebrations, and megalomania – "Who builds their own statues?" 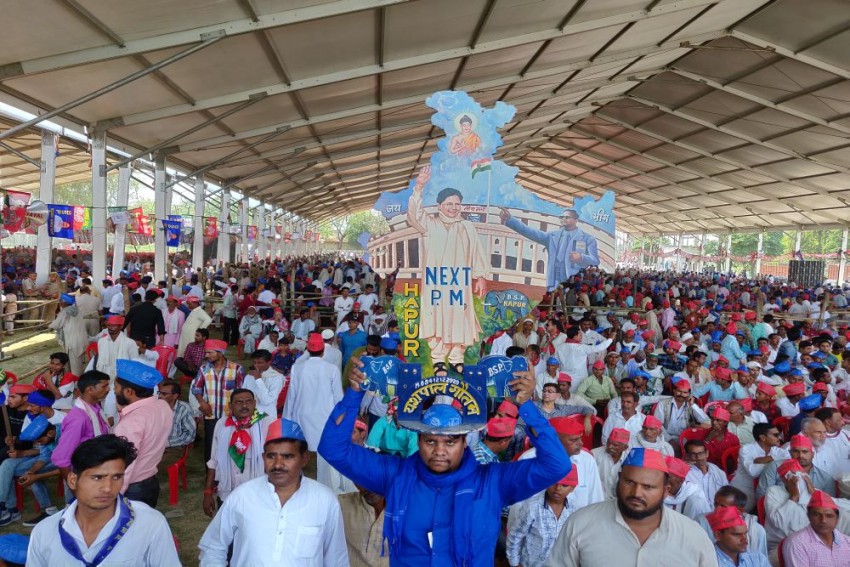 A BSP supporter holding a cutout of the country’s geographical outline, with a picture of Mayawati drawn over it.
Salik Ahmed
Salik Ahmad May 14, 2019 00:00 IST Mayawati, Honourable Prime Minister. Why The Heartburn? 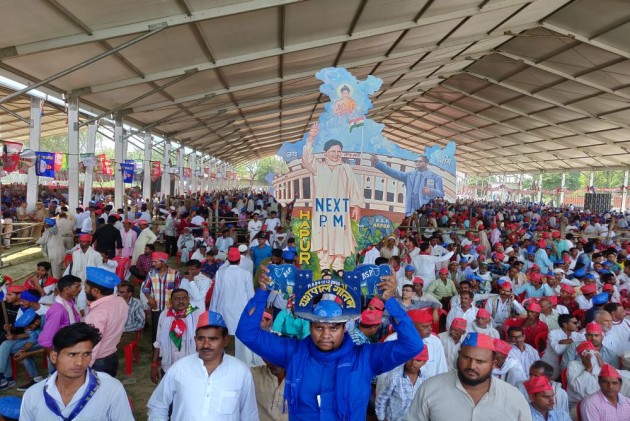 She is unfit for public life, union minister Arun Jaitley said of Bahujan Samaj Party (BSP) chief Mayawati, after the latter targetted Prime Minister Narendra Modi, saying his concern for women was fake. "He had deserted even his own wife for political gains and therefore, doesn't know how to respect women," she added.

In 2009, Rita Bahuguna Joshi, former Congress leader who is now with the BJP, had said in the wake of inadequate compensation to rape victims "that were Mayawati to face similar circumstances, she would dole out compensation of 1 crore rupees."

Despite this remark, BJP leadership found her fit for public life and made her party candidate for the prestigious Allahabad seat.

He held a cutout of the country’s geographical outline, with a benevolent-looking Mayawati drawn over it. BR Ambedkar, Gautam Buddha, the Parliament building, and an elephant, were the other features of the neat oddity. Over Mayawati’s depiction, appeared two words: "Next P.M."

It was interesting enough to be photographed. So, I did. I shared the image among a group of friends on WhatsApp. “God forbid,” came a prompt response from one. I followed it up with a why. “She is communal, casteist, corrupt and opportunistic.”

I persisted and argued that the same could be said about almost every politician in the country. After levelling several charges, my friend concluded that leaders such as Mayawati and Mulayam, “who can’t even speak properly”, are unfit to lead the country and would only bring embarrassment to India internationally. “It’s the truth. No matter how politically incorrect it sounds,” I was told.

The rich overtones of privilege in my friend's statement were stark.

A four-time chief minister of India's most populous state, Mayawati, is a veteran of Hindi heartland politics for the past three decades. A darling of India's subjugated castes, Mayawati has risen from an extremely humble background and she, along with her mentor Kanshiram, is credited to have revived the 'bahujan' politics in the Indian parliament. The ‘Dalit ki Beti’ has solidly cut her teeth on state politics and been at the forefront of a long due and intense social movement. Furthermore, technically speaking, she heads the third largest national party in terms of vote share in the 2014 general elections.

Yet, the basest of criticisms against her start and end with a direct attack on her caste. The saner ones cite the allegations of wide-scale corruption, an extravagant display of her birthday celebrations, and megalomania – "Who builds their own statues?"

The sentiment against Mayawati has been the same since the day she set her foot in the heartland politics -- that she is corrupt, cannot speak properly, doesn't know English, is overly ambitious for someone of her caste, comes across as uncouth, etc. Criticism of Mayawati, more often than not, has a dimension of rancour and even disgust, among the elite and upper-middle-class Indian population.

For instance, Priyanka Gandhi is at the receiving end of persistent hate from the troll ecosystem, but the abuse directed at her is rarely as vituperative as is for Mayawati.

Those who go an extra mile in discrediting her with the vilest of allegations are probably themselves victims of casteism, lookism, elitism, and perhaps even sexism. The discrimination Mayawati faces is multilayered, and those doing it never make the effort to bring themselves to its admission. Contrast her with a monk who cannot speak English, is known for his overtly communal politics, casteism in officer postings, abuse of police machinery and smug nature. He does not evoke a sense of disgust in them. But Mayawati does.

Those who sit over rocks of privilege, cursing reservation through their over-simplistic and ahistorical worldviews, frown at the ‘spectre’ of Mayawati becoming the country’s Prime Minister. The frown itself, represents the chasm, and absence of social exchange, between them and the section of people that regards Mayawati as their messiah. Her extravagant lifestyle extends a vicarious gratification to her Dalit followers, who think that if she is doing it today, they’ll be doing it tomorrow.

Dalits, in some parts of the country, still struggle to get their FIRs registered. Even as I write this piece, there are stories coming from Gujarat and UP that Dalit men have to seek police protection in order to ride a horse in their weddings. The Dalit community is still under-resourced in terms of basic education and healthcare, let alone representation and leadership.

One cannot view Mayawati as a politician without the history – one that is recurring – of atrocities against Dalits. The sense of empowerment Mayawati’s rule instilled among Dalits in UP is undeniable. There are other things to her credit if one wishes to look at them. The rule of law and alertness of officers, in a state infamous for broken law enforcement systems, was unprecedented during her rule. There were no major communal clashes in her tenure, despite situation becoming volatile around the date of the verdict in Ram Janmabhoomi case in 2010. In addition, the discipline within her party can serve as a case study for other parties.

To call Mayawati casteist is risible since her multiple tenures in UP have been credited with providing equal opportunity spaces to people from all castes and communities, majority or minority, including, believe it or not, the Brahmin community. On multiple occasions, she has reiterated that Bahujan politics will not discriminate against anyone, based on their caste or religion.

The year 2019 might be the closest Mayawati’s prime ministerial ambitions have come to reality. Those denigrating her might as well spare a thought about the spirit of affirmative action, and try to make the prospect of her leadership more acceptable. Poet Dinkar had coined the phrase singhasan khaali karo, ki janta aati hai," during the regime of Indira Gandhi and who knows, it might turn out to be prophetic once again in 2019.

Can India's Character As A Secular Republic Be Sustained?