Jadavpur Fracas Godsend For BJP, It Is Set To Crack Open Left's Citadel

Taking advantage of Thursday’s violence on Jadavpur University campus, the BJP is now set to crack open the Left bastion, if not electorally, then by force. 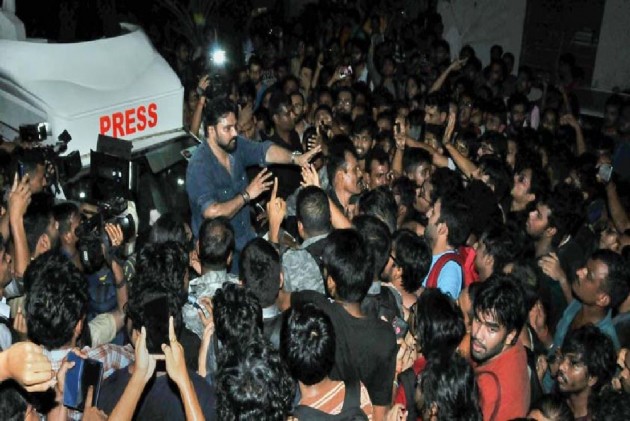 Jadavpur University is on the boil again. The violence on the campus by the Left students has allowed the BJP to take high moral ground and make inroads in the state which will go to polls in 2021.

Jadavpur University Thursday plunged into unprecedented lawlessness and West Bengal Governor and Chancellor of the university Jagdeep Dhankhar had to rush to rescue Union minister Babul Supriyo, who was heckled and detained for hours by radical Left students.

Earlier, vice-chancellor Suranjan Das was injured and had to be hospitalised when he tried to rescue the Union minister.

Hundreds of ABVP supporters entered the university armed with lathis and ransacked students’ union offices. The ABVP workers, accompanied by the VHP’s women wing Durga Vahini, were engaged in a scuffle with police while trying to force their way into the university premises.

The trouble began when Union minister Supriyo went to JU to address a seminar on National Register of Citizens (NRC), organised by Akhil Bharatiya Vidyarthi Parishad (ABVP), the students’ wing of the RSS. Supriyo was shown black flags and heckled by a section of Left and radical Left students at the university, who also stopped him from leaving the campus.

With tensions rising, Supriyo wanted Das to call in the police. However, the vice-chancellor refused and reportedly said he would “rather resign” than call the police on the campus. The impasse continued as the students gheraoed the minister demanding his apology.

West Bengal Governor Dhankar, at first issued a stern statement condemning the students. Later, he called the state chief secretary (as Chief Minister Mamata Banerjee was in Delhi) and asked him to bring the situation under control.

After that, Dhankhar rushed to the campus along with large police force and rescue gheraoed minister Supriyo, ending over five hours of impasse.

While all attention was focused on the Governor, the heckled minister and the agitating students, a group of ABVP supporters entered the Jadhavpur campus and ransacked union offices of SFI and others.

What is noteworthy is that even though the entire imbroglio was being played out for hours, the state administration was seen adopting a hands-off stance.

Chief Minister Banerjee's administration and her cabinet ministers were nowhere near the scene of the incident. Bratya Basu, a senior minister of TMC government, refused to comment, saying he was not in Kolkata. Sujan Chakraborty, CPI(M) leader in the state assembly and an ex-student of JU, feels that this won't bode well for the Left, rather it will benefit the BJP.

For many years now, the two universities -- Jadavpur and Presidency - remain the last two strongholds of the Left and radical Left. Both, the ruling Trinamool Congress (TMC) and the BJP have been trying hard to break the shackles and take control of the student unions, but with little or no success.

It is not for nothing that the ABVP supporters, mostly brought from outside, attacked Left student union offices. For BJP and their student wing ABVP, both JU and Presidency University are thought to be breeding ground of "anti-nationals". Last month, the Presidency University administration had stopped the screening of the film Ram Ke Naam.

Now, in Jadavpur University, ABVP activists have raised 'Jai Shri Ram' and ‘Bharat Mata Ki Jai’ slogans and painted ABVP on the walls of Left student union offices. The writing on the wall is symbolic. Taking advantage of Thursday’s headstrong act by the radical Left students, the BJP is now set to crack open the Left bastion, if not electorally, then by force.

Aurat ka Dal, and 99 Other Reasons Why Not to Impose Hindi