How Jeanette Winterson Ate The Rabbit That Ate Her Parsley 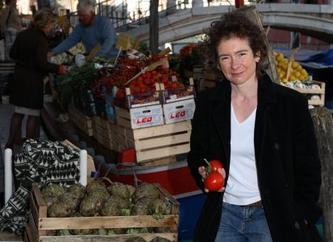 British writer, broadcaster and activist Jeanette Winterson got into quite a bit of trouble on Twitter after she posted a somewhat graphic picture of a rabbit's carcass on her kitchen counter and wrote: "Rabbit ate my parsley. I am eating the rabbit."

Rabbit ate my parsley. I am eating the rabbit. pic.twitter.com/36rOpIxqxj

The author who has been a vegetarian for almost nine years went on to share pictures of the rabbit being "washed and jointed for the pot", before being cooked with rosemary and thyme.

Here is the rabbit washed and jointed for the pot pic.twitter.com/u3sWUAVIF9

On the AGA in cider with rosemary and thyme pic.twitter.com/OdezgxYFZQ

If that wasn't enough, the author even posted photos of her cat eating the entrails.

For all the Tweeters who said my cat would prefer Whiskers (where do u think pet food comes from BTW?) pic.twitter.com/uhFpg4illa

@Wintersonworld #before i unfollow u,u make me sick. I will never again. read a word u write. Rest in peace little rabbit.

How your cat and you have disappointed me @Wintersonworld ! At least the cat has an excuse. If you have to kill, why brag about it all day?

@Wintersonworld You are sickening! I despise you for praising yourself and feeling proud for killing the poor rabbit.

@Wintersonworld have no problem with meat eaters, but do you have to force it on those of us who aren't? It diminishes your literariness.

However, some followers were quite thrilled by what she had done. Even inspired.

@Wintersonworld Did you make or buy cages? I want to have a go. Did someone show you how to dispatch? Guessing not a headshot.