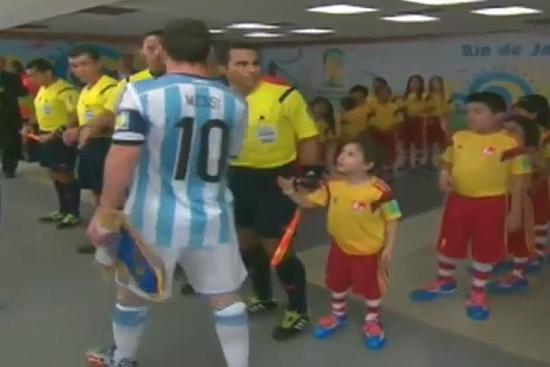 The incident apparently took place before the Argentina-Bosnia and Herzegovina match that the former won 2-1. The international superstar was seen walking in to shake hands with a few officials, but completely, seemingly, ignoring a small kid who had emerged from the back with his hand outstretched hopefully.

A video of the heart-breaking incident showing the sadness on the kid's face, as he withdrew his hand and retreated, emerged and did the rounds and soon went viral, resulting in the football icon being termed a Heartbreaker.

When asked, Messi denied having deliberately snubbed the child and said he must have probably missed seeing the child while passing by.

"I have nephews and a son. I'll never do that to kid," the Argentine footballer said.

Messi was also asked about his supposed "competition" with the Brazilian star Neymar. "I do not compete with him. He is a companion and a great player. We have a very good and normal relationship."

But, that is not where it ended. The football star apparently hunted out the child, as this tweetpic claimed:

Messi with the kid he didn't see before the game. @102greatgoals #ARG #WorldCup via @FCBJulian

Others claim, however, that the photograph in the Tweetpic above is not of the child whose proffered hand was ignored but someone else.

The original, viral video has since been removed from YouTube. Clearly, professional public relations and image managers seem to have moved in...