How Anderson Was Allowed To Get Away

Much anguish has been expressed about Digvijay Singh's remarks about American pressure in the release of Warren Anderson, as if he was revealing some state-secret. Bharat Desai in the TOI sums it up well: "Today, 25 years later, the entire media is unravelling the 'mystery' behind the release of the Union Carbide chairman Warren Anderson five days after the disaster, as if it this is some piece of breaking news..."

And what he goes on to say will not come as breaking news to anyone who followed the happenings in those days when the media may not have been all that pervasive, but the American pressure was an open secret:

Chief minister Arjun Singh had apparently not consulted the caretaker Prime Minister Rajiv Gandhi before ordering the arrest of Anderson on December 7. After the arrest, Rajiv Gandhi's powerful aide and cousin, Arun Nehru, telephoned Arjun Singh and told him that US President Ronald Regan had called up the Indian PM and 'requested' him to release Anderson immediately. Now, Rajiv Gandhi was an Indian Airlines pilot, accustomed to taking only orders from air traffic control. The job of prime minister was thrust upon him because of his mother's assassination just one month before the gas disaster. He couldn't have resisted the top man in the White House.

Pranab Dhal Samanta in the Indian Express corroborates the Delhi and US angle, but provides the following version of the sequence of events:

“Although Mr Arjun Singh had given directions to the Chief Secretary, he was acting under the directions of Rajiv Gandhi who, in turn, was under pressure from the highest levels in the US government,” Jain told The Indian Express. ...

Around 1 pm, Arjun Singh again called up the Chief Secretary for an update. And here again, according to what Swaroop shared with his colleagues soon after the conversation, the CM was insistent and said he had to give a “compliance report to Rajiv Gandhi”. Later, Swaroop informed the core group members that Singh had even told him to arrange for a state government plane to transport him to Delhi upon release.

At that stage, the SP took the DM away and both discussed the matter. They returned and informed the group that they had found a way to carry out Singh’s orders. Thereafter, the orders were carried out. Additional Secretary M S Singh Deo, who was considered close to Arjun Singh, is said to have met the CM the next day after he returned from the rally. It was he who then disclosed to his colleagues that Rajiv Gandhi had told Singh after US President Ronald Reagan had personally intervened in the matter.

All of which of course squares with what the press reported at that time as well. As the Express story points out, despite pressure from the CM, the state government officials argued that it "was not possible" [to release Anderson] "after the police had pressed charges against Anderson".

"At that stage, the SP took the DM away and both discussed the matter. They returned and informed the group that they had found a way to carry out Singh’s orders"

What was the way? For a ready-reckoner, one may not need to go beyond Google, and at least one diligent data-miner has already done the homework and documented it on, yes, where else but Twitter. Following  some of the links provided by off-stumped, using a basic Google news archive search, the spin that the Congress came up with then is there for all to see, nicely recorded in the US newspapers of the period available on line. The official US version is also instructive: 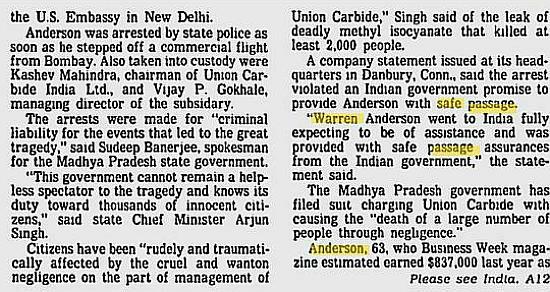 The US Embassy in New Delhi said Anderson's release on $2000 bail was secured after delicate negotiations between the US and Indian governments. He had been held at Union Carbide's luxurious guest house.

"The Indian government was very helpful," said WIlliam Miller, spokesman for the US Embassy in New Delhi....

A company statement issued at its headquarters in Danbury, Conn., said the arrest violated an Indian government promise to provide Anderson with safe passage.

"Warren Anderson went to India fully expecting to be of assistance and was provided safe passage assurances from the Indian government, " the statement said 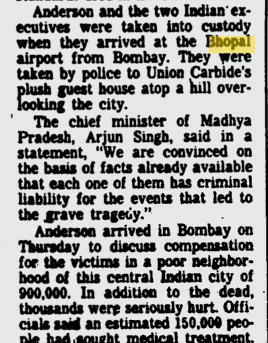 Anderson would be asked to leave India as soon as possible "because his presence might provoke strong passions against him and because we do not consider his presence in India desirable," said spokesman for the Madhya Pradesh state government

In Washington, White House spokesman Larry Speakes said the United States made "some representations" to Indian officials through the embassy in New Delhi. He said he did not know whether they led to Anderson's release.

...
The chief minister of Madhya Pradesh, Arjun Singh, said in a statement, "We are convinced on the basis of facts already available that each one of them has criminal liability for the events that led to the grave tragedy."

Anderson would be asked to leave India as soon as possible "because his presence might provoke strong passions against him and because we do not consider his presence in the country desirable," said Sudip Banerjee, a spokesman for the Madhya Pradesh state government 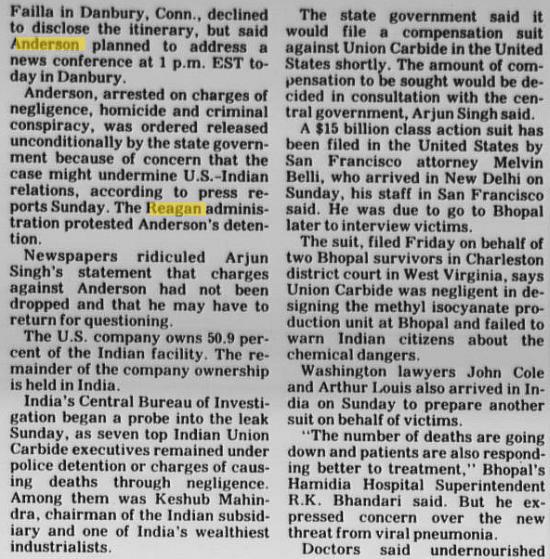 Anderson, arrested on charges of negligence, homicide and criminal conspiracy, was ordered released unconditionally by the state government because of concern that the case might undermine US-Indian relations, according to press reports Sunday. The Regan administration protested Anderson's detentio

Even the declassified CIA documents, available online  make it clear what has long been known, viz. that the release was authorised by the central government.

Document # 0000706, in what the US declassified papers describe as the EAST ASIA BRIEF OCPAS EAB 84-281 FOR DECEMBER 1984, dated 8 December 1984, a day after Anderson fleed India and five days after the gas leaked from Union Carbide’s Bhopal plant, speaks for itself: 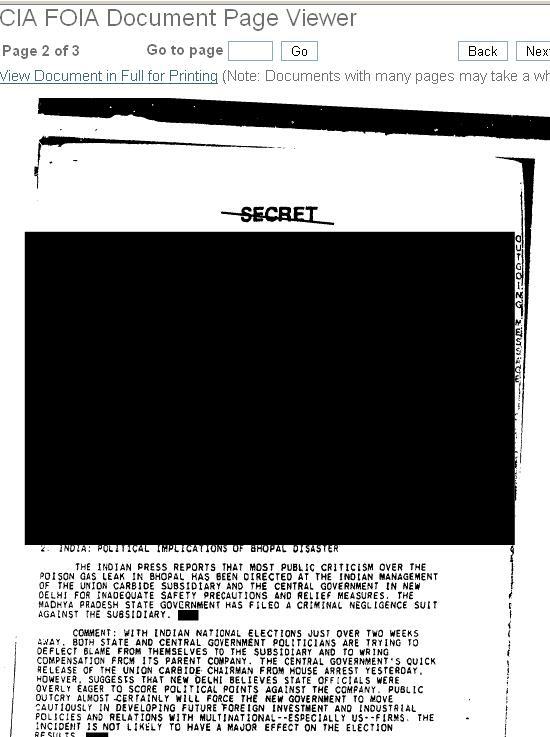 If that was then, now is no better: the documents we put up on the site yesterday, showing the stance taken by various Congress party bigwigs, including two prominent ministers and the party spokesperson, arguing that Dow has no responsibility for Bhopal, of course tell their own tale. 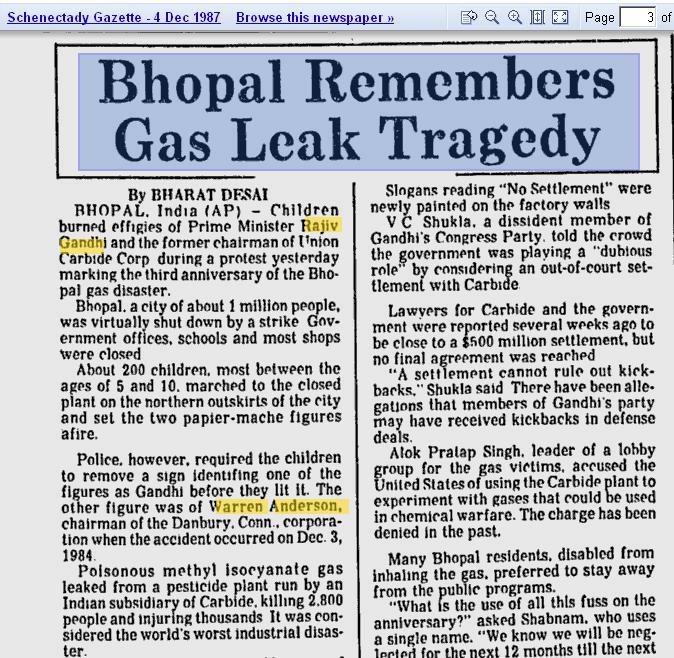 ... VC Shukla a dissident member of Gandhi's Congress party told the crowd the government was playing a "dubious role" by considering an out-of-court settlemtnt.

"A settlement cannot rule out kickbacks," Shukla said. There have been allegations that members of Gandhi's party may have received kickbacks in defense deals

On the escape of Anderson, I was there in Bhopal at the time – December 7, 1984 - and later learned about what happened from both government and company sources.

Arjun Singh, then the chief minister of Madhya Pradesh (Bhopal is the state capital) heard that Anderson was flying into Bhopal from Bombay on a flight that stopped in Indore. So he ordered his police to the airport without (fearing leaks) telling them why, till the plane had taken off from Indore, when he told them Anderson should be arrested on arrival.

Anderson had planned his visit as some sort of mercy and goodwill mission. As the plane landed in Bhopal, he looked out of the cabin window and saw the police cars, so said to Mahindra, who was sitting beside him, how good it was of the state government to provide him with an escort.

He was immediately arrested and taken to the Union Carbide guest house on a hill overlooking the city. Along with a crowd of Indian and foreign journalists, I stood that afternoon at the guest house’s front gates waiting for Anderson to emerge. Shame on us all, he was whisked out of the back gate without most of us seeing him, and was released on bail after being held for just six hours. He was put on a government plane to Delhi, and then flew to the US.

Although we did not know that afternoon whether Anderson was being flown to Delhi to be detained there, we had no doubt that Singh, a leading Congress politician, was acting on the orders of – or at least with the approval of Rajiv Gandhi, the Congress prime minister. The government is now saying that Singh sent Anderson out of Bhopal because he feared civil unrest if the executive was seen in the city. But that does not explain why, presumably at the behest of the US, Anderson was then allowed to leave the country.