After his experience with My Foolish Heart, JD Salinger seems to have decided resolutely to refuse to let his stories be adapted into films ("Those movies, they kill you, they really do"), and in this letter written in 1957 in response to an enquiry from a Mr. Herbert, Salinger explains why he would never sell the stage and screen rights to the Catcher in the Rye in this letter that is up for auction here: 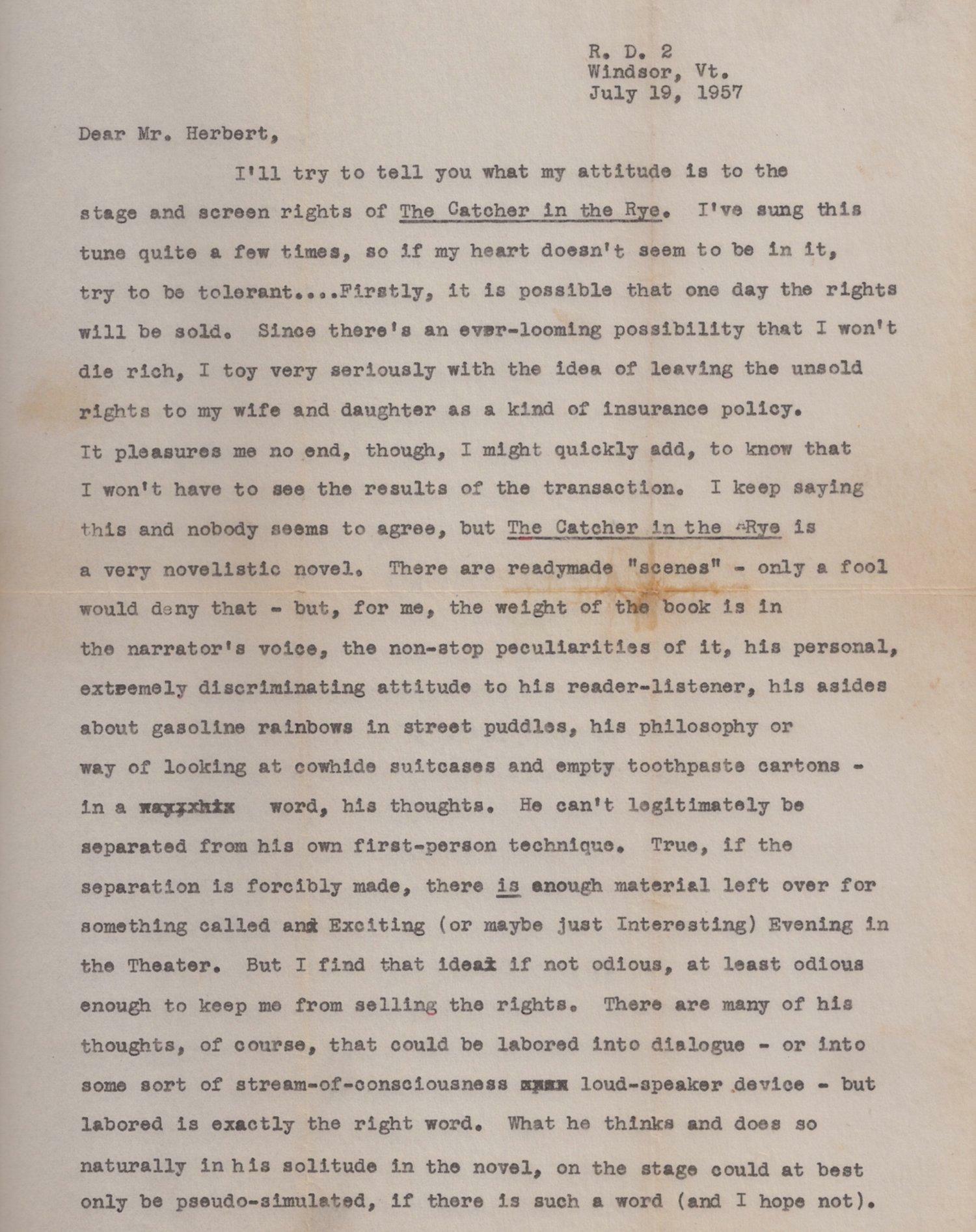 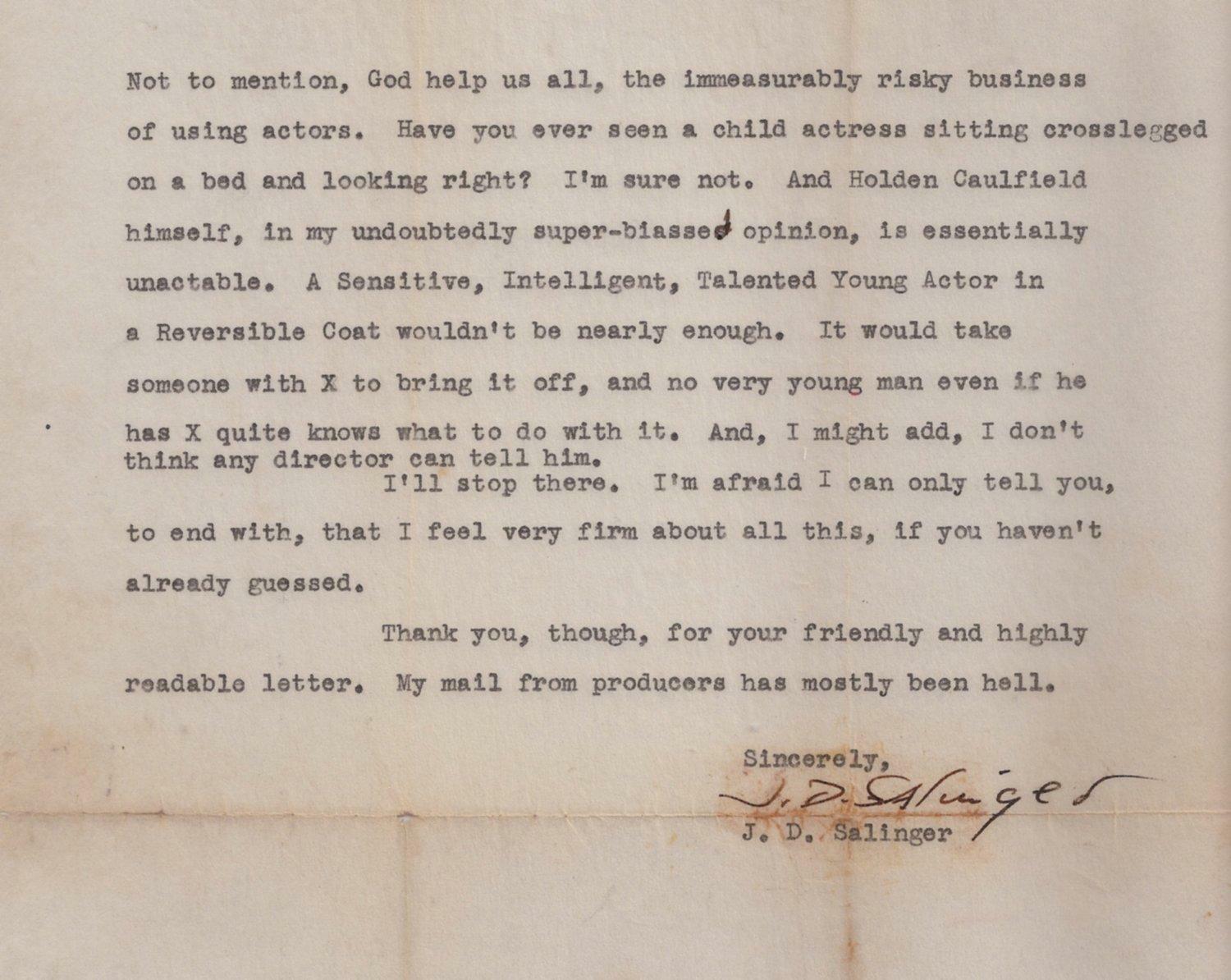 I'll try to tell you what my attitude is to the stage and screen rights of The Catcher in the Rye. I've sung this tune quite a few times, so if my heart doesn't seem to be in it, try to be tolerant....Firstly, it is possible that one day the rights will be sold. Since there's an ever-looming possibility that I won't die rich, I toy very seriously with the idea of leaving the unsold rights to my wife and daughter as a kind of insurance policy. It pleasures me no end, though, I might quickly add, to know that I won't have to see the results of the transaction. I keep saying this and nobody seems to agree, but The Catcher in the Rye is a very novelistic novel. There are readymade "scenes" - only a fool would deny that - but, for me, the weight of the book is in the narrator's voice, the non-stop peculiarities of it, his personal, extremely discriminating attitude to his reader-listener, his asides about gasoline rainbows in street puddles, his philosophy or way of looking at cowhide suitcases and empty toothpaste cartons - in a word, his thoughts. He can't legitimately be separated from his own first-person technique. True, if the separation is forcibly made, there is enough material left over for something called an Exciting (or maybe just Interesting) Evening in the Theater. But I find that idea if not odious, at least odious enough to keep me from selling the rights. There are many of his thoughts, of course, that could be labored into dialogue - or into some sort of stream-of-consciousness loud-speaker device - but labored is exactly the right word. What he thinks and does so naturally in his solitude in the novel, on the stage could at best only be pseudo-simulated, if there is such a word (and I hope not). Not to mention, God help us all, the immeasurably risky business of using actors. Have you ever seen a child actress sitting crosslegged on a bed and looking right? I'm sure not. And Holden Caulfield himself, in my undoubtedly super-biassed opinion, is essentially unactable. A Sensitive, Intelligent, Talented Young Actor in a Reversible Coat wouldn't nearly be enough. It would take someone with X to bring it off, and no very young man even if he has X quite knows what to do with it. And, I might add, I don't think any director can tell him.

I'll stop there. I'm afraid I can only tell you, to end with, that I feel very firm about all this, if you haven't already guessed.

Thank you, though, for your friendly and highly readable letter. My mail from producers has mostly been hell.

(via: Letters of Note)

In another letter, to an 'angst-ridden' first-year college student who asked for writing advice, he says: 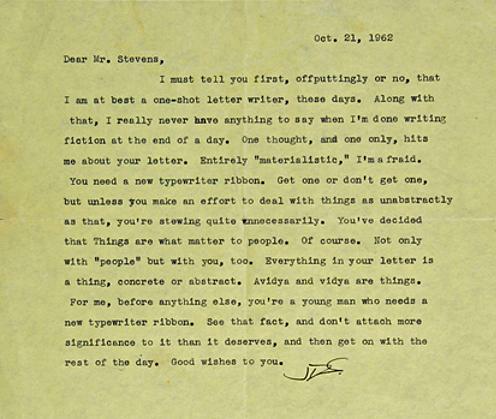 I must tell you first, offputtingly or no, that I am at best a one-shot letter writer, these days. Along with that, I really never have anything to say when I'm done writing fiction at the end of a day. One thought, and one only, hits me about your letter. Entirely 'materialistic,' I'm afraid. You need a new typewriter ribbon. Get one or don't get one, but unless you make an effort to deal with things as unabstractly as that, you're stewing quite unnecessarily. You've decided that Things are what matter to people. Of course. Not only with 'people' but with you, too. Everything in your letter is a thing, concrete or abstract. Avidya and vidya are things. For me, before anything else, you're a young man who needs a new typewriter ribbon. See that fact, and don't attach more significance to it than it deserves, and then get on with the rest of the day. Good wishes to you. JDS."

(via Letters of Note)