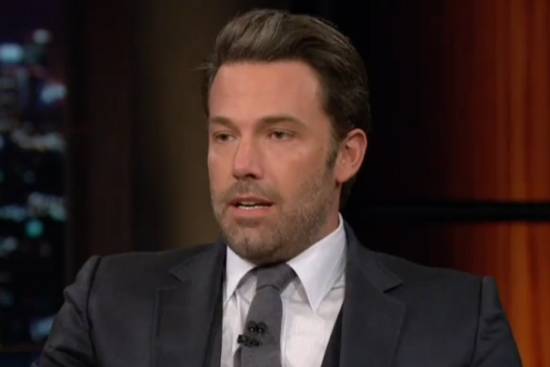 Maher essentially continued from the programme the week before when he had contended that "if we're giving no quarter to intolerance, shouldn't we be starting the mutilators and the honour killers?"

Since Ben Affleck, who objected to Bill Maher's "gross, racist, disgusting," ideas has been in the news even otherwise, we thought we should place on record what he actually said on the programme.

Bill Maher (to Sam Harris): You and I have been trying to make the case—at least, I have— that liberals need to stand up for liberal principles. Freedom of speech, freedom to practice any religion you want without fear of violence, freedom to leave a religion, equality for women, equality for minorities, including homosexuals, these are liberal principles that liberals applaud for, but then when you say in the Muslim world this is what's lacking, then they get upset.

Sam Harris: Well, liberals have really failed on the question of theology. They'll criticise White Theology. They'll criticise Christians, they'll still get agitated over the abortion clinic bombing that happened in 1984, but when you want to talk about the treatment of women and homosexuals, and free thinkers and public intellectuals in the Muslim world, I'd argue that the liberals have failed us. And the crucial point of confusion is this that we have been sold this meme of Islamophobia where every criticism of the doctrine of Islam is conflated with bigotry towards Muslims as people. It is intellectually ridiculous...

Ben Affleck: So, hold on, are you the person who understands the officially codified doctrine of Islam?

Ben Affleck: I'm asking you. So if you saying that Islamophobia is not a real thing? That if you're critical of something...

Bill Maher: It's not a real thing when we do it. Which really isn't!

Sam Harris: I'm not saying there aren't people who aren't bigoted against Muslims as people. And that's a problem.

Ben Affleck: That's big of you.

Bill Maher: Why are you so hostile?

Ben Affleck: It's gross, it's racist, it's disgusting..

Bill Maher: You're not listening to what we are saying.

Ben Affleck: You guys are saying that if you want to be liberals, believe in liberal principles.

Ben Affleck: Like we are endowed by our forefathers--

Sam Harris: Ben, we have to be able to criticize bad ideas.

Ben Affleck: Of course we do.

Sam Harris: Okay, but Islam is the motherload of bad ideas....

Bill Maher: These are just the facts.

Ben Affleck: It isn't. It is just an ugly thing to say

Sam Harris: Let me unpack it.

Nicholas Kristof: ... it's the basic liberal principle of tolerance.

Bill Maher: But not for intolerance.

Nicholas Kristof: Of course not, but the picture you are painting is to some extent true, but is hugely incomplete. It is certainly true that plenty of fanatics and jihadis are Muslim, but the people who are standing up to them. Malala [Yousafzai], Mohammad Ali Dadkhah in Iran, imprisoned for nine years for speaking up for Christians. A friend I had in Pakistan that was shot this year, Rashid Ra..., for defending people accused of apostasy...

Ben Affleck: How about more than a billion people who aren't fanatical, who don't punch women, who just want to go to school, have some sandwiches, pray 5 times a day, and don't do any of the things you're saying of all Muslims? It's stereotyping.

Ben Affleck: Some of them do bad things and you're painting the whole religion with that broad brush.

Bill Maher: Wait, let's get down to who has the right answer here. A billion people, you say.

Bill Maher: But you're saying the idea that someone should be killed if they leave the Islamic religion is just a few bad apples?

Ben Affleck: The people who would actually believe in that you murder someone if they leave Islam is not the majority of Muslims at all...

Sam Harris: Let me unpack it for you... Just imagine you have some concentric circles. You have at the centrists, you have jihadists, these are people who wake up wanting to kill apostates, wanting to die trying. They believe in paradise, they believe in martyrdom. Outside of them, we have Islamists, these are people who are just as convinced of martyrdom and paradise and wanting to foist their religion on the rest of humanity but they want to work within the system. They're not going to blow themselves up on a bus. They want to change governments, they want to use democracy against itself. Those two circles arguably are 20% of the Muslim world.

Ben Affleck: What are you basing that research on?

Sam Harris: There are a bunch of poll results that we can talk about. To give you one point of contact: 78% of British Muslims think that the Danish cartoonist should have been prosecuted. 78%. So, I'm being conservative when I roll this back to 20%. But outside of that circle you have conservative Muslims who can honestly look at ISIS and say that does not represent us, we're horrified by that but they hold views about human rights, and about women, and about homosexuals that are deeply troubling. So, these are not Islamists, they are not jihadists, but they often keep women and homosexuals immiserated in these cultures and we have to empower the true reformers in the Muslim world to change it. And lying about doctrine and this behaviour is not going to do that...

Nicholas Kristof:   The Great Divide-- it's not between Islam and the rest, it's rather between the fundamentalists and the moderates in each faith.

Sam Harris: But we're misled to think the fundamentalists are the fringe. We have jihadists, Islamists, and conservatives. There's hundreds of millions of people in that group.

Michael Steele: You're saying that the strongest voices are coming from those who are jihadists and extremists. And that represents a bigger piece of the pie than we often think is true.

Sam Harris: There's no question about that.

Michael Steele: So having said that, even if that is true, statistically or otherwise, the key thing to recognize— that I don't think is part of the argument, but I think should be— is that there are voices that are oftentimes raised in opposition to these jihadists, and to these extreme acts but, guess what, they don't covered, they don't get exposed. And they're not given the same level platform that we see jihadists get.

Bill Maher: One reason they don't get exposed is because they're afraid to speak out because it's the only religion that acts like the mafia that will fucking kill you if you say the wrong thing, draw the wrong picture or write the wrong book. There's a reason why Ayaan Hirsi Ali needs bodyguards 24/7...

Michael Steele:  You do have that element of fear, but you also have other brave souls out there who do, who do speak out, who...

Nicholas Kristof: ...are risking their lives...

Michael Steele: Like the Muslim clerics and others from Australia to the Europe to the United States, who publicly, openly put their names to paper to declare their opposition to what ISIS and others are doing, so there are those voices. But where was the coverage? Where was that story to...

Ben Affleck: What is your solution? To condemn Islam? To do what? We've killed more Muslims than they've killed us by an awful lot. We've invaded more...

Ben Affleck: And somehow we're exempt from these things because they're not really a reflection of what we believe in. We did it by accident, that's why we invaded Iraq.

Ben Affleck: I'm simply telling you that I disagree with you.

Bill Maher: I understand, and we're obviously not convincing anybody here.

Ben Affleck: Your argument is, "You know, black people, they shoot each other" --

Bill Maher: It's not! No, it's not. It's based on facts. I can show you a Pew poll of Egyptians. They are not outliers in the Muslims world. It's like 90% of them believe death is the appropriate response to leaving the religion. If 90% of Brazilians thought that death was the appropriate response to leaving Catholicism, you would think it was a bigger deal.

Ben Affleck: I would think it's a big deal no matter what.

Ben Affleck: I wouldn't say it's all Brazilians, or I wouldn't say, "Well, Ted Bundy did this. God damn these gays, they're all trying to eat each other."

Sam Harris: Let me just give you what you want. There are hundreds of millions of Muslims who are nominal Muslims who don't take the faith seriously, who don't want to kill apostates, who are horrified by ISIS and we need to defend these people, prop them up and let them reform their faith.

Ben Affleck: ISIS couldn't couldn't full a AA ballpark in Charleston, West Virginia and you want to make a career out of ISIS, ISIS, ISIS.

Bill Maher: No we're not. That's the opposite.

Sam Harris: No, it's not just ISIS, it's all jihadists. It's a phenomenon of global jihad.

Bill Maher: I think that's the opposite of what we're doing.

Ben Affleck: There is those things. There is ISIS, there is global jihadists. The question is the degree to which you're willing to say, because I've witnessed this behaviour, which we all object to, on part of these people, I'm willing to flatly condemn those of you I don't know and never met.

Bill Maher: They're not willing. This is based on reality.

Sam Harris: It's not condemning people, it's ideas.

Bill Maher: It's based on reality, Ben. We're not making it up that in the Muslim world it is mainstream belief.

Nicholas Kristof: This is such a caricature of Indonesia, of Malaysia, of so much of the world. And this does have a tinge a little bit of how white racists talk about African-American and define blacks by...

Bill Maher: What you're saying is because they are a minority, we shouldn't criticize.

Ben Affleck: It's not a minority, it's the second biggest religion in the world.

Bill Maher: Exactly, but you're treating them like a minority. I mean if Filipinos were capturing teenagers and sending them into white slavery, we would criticize that. We wouldn't say, oh, well, they're Filipinos.

Ben Affleck: You would criticize the people who are doing it, not the Philippines. A Filipino kid who lives on the streets has nothing to do with that. These are different things.