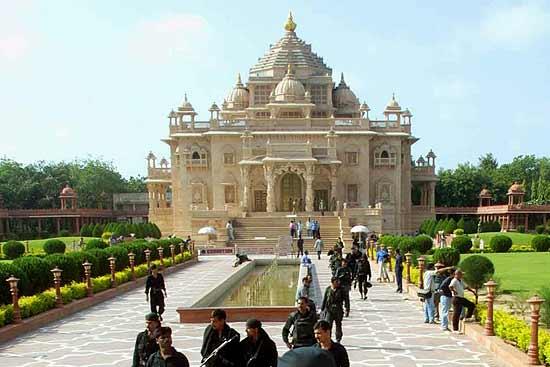 Thanks to Manoj Mitta's piece in the Times of India yesterday, Akshardham attack case: Decoding the other verdict of May 16, we revisit the SC verdict in the September 2002 Akshardham temple attack case.

As Mitta points out,

While acquitting all the six persons who had been convicted by Gujarat high court , the Supreme Court has brought out many curious aspects of the investigations in its May 16 verdict

It is worthwhile reproducing and highlighting some of the concluding portions of the SC's judgement in extenso:

The investigation process post Akshardham attack happened as under:

A careful observation of the above said dates would show that the ATS was shooting in the dark for about a year without any result. No trace of the people associated with this heinous attack on the Akshardham temple could be found by the police. Then on the morning of 28.03.2003, the case is transferred to Crime Branch, Ahmedabad. This was followed by D.G. Vanzara giving instructions to the then-ACP G.S. Singhal (PW-126) about one Ashfaq Bhavnagri (PW-50). PW-126 was thereafter made in charge of the case on the same evening at 6:30 p.m. and the statement of PW- 50 was recorded at 8 p.m., i.e within one and a half hours. This shrouds our minds with suspicion as to why such a vital witness- D.G. Vanzara, who discovered the link to the accused persons, was not examined by the Special Court (POTA). The courts below accepted the facts and evidence produced by the police without being suspicious about the extreme coincidences with which the chain of events unfolded itself immediately that is, within 24 hours of the case being transferred to the Crime Branch, Ahmedabad.

The Supreme Court also raised questions about "the alleged letters" in Urdu that were said to have been found in the pockets of the blood-stained and bullet-ridden bodies of the two fidayeens:

102...Further, the post mortem report of the fidayeens (Ex.492) stated that all their clothes were stained Crl.A.Nos.2295-2296 of 2010 -204-with blood and mud and all clothes bore multiple tears and holes due to perforation by bullets. In such a case, the fact that the letters remained clean, without any tear, soiling or stains of blood and soil is highly unnatural and improbable.

Mitta concludes his piece by pointing out:

The case would not have gone to trial with such infirmities had Gujarat's home department — a portfolio then held by Narendra Modi — denied the necessary sanction for prosecution under POTA. KC Kapoor, who was principal secretary, home, admitted that that in the material placed before him for sanction, he had not seen any papers suggesting compliance of the statutory conditions. As a corollary, the SC said that the sanction was neither "an informed decision" nor was it on the basis of "an independent analysis of fact in consultation with the investigating officer".

The apex court added, "This would go to show clear non-application of mind by the Home Minister in granting sanction." The stricture on Modi didn't end with that. The Supreme Court said that there was "perversity in conducting this case at various stages, right from the investigation level to the granting of sanction by the state government".

The judgment acquires greater significance as it was delivered on the very day Modi-led BJP won the Lok Sabha election.

Read Manoj Mitta's piece at the Times of India: Akshardham attack case: Decoding the other verdict of May 16