Ostentatious celebration of Durga Puja in Calcutta is traced back to the early 1700s when Bengal’s zamindars outdid each other in displaying their influence, power and wealth by spending large sums of money in festivities. 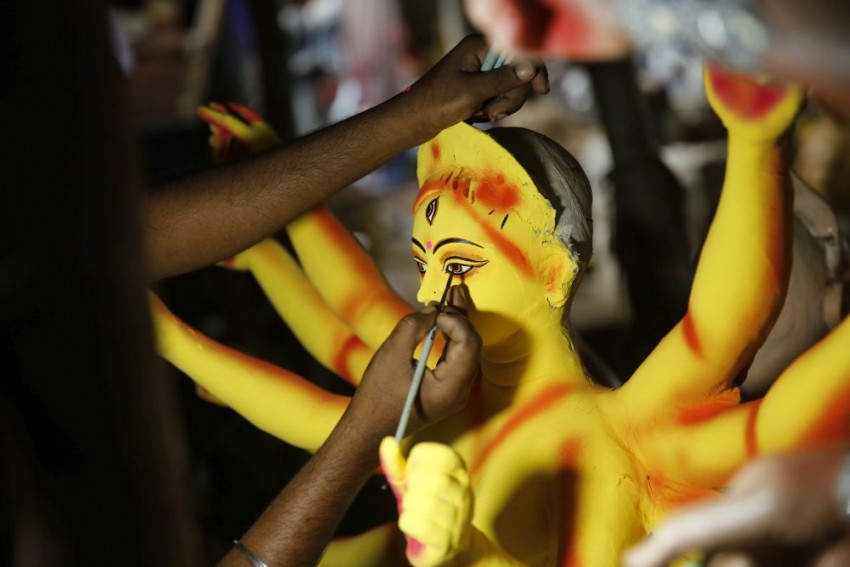 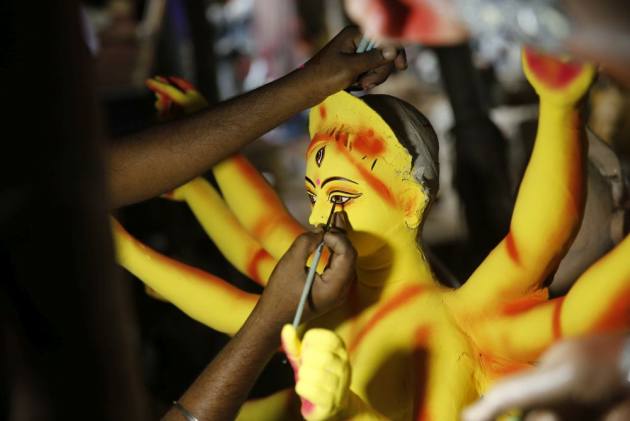 Driving through the streets of Calcutta on Oshtomi, the day that the Durga Puja celebrations reach its climax, is an experience in suspended reality.

One cannot help but reflect that Durga Puja is parable of life. The thought of the “end of the week” when the Goddess will be immersed into the water and dissolve and disappear into nothingness is always nigh but it does not – or at least should not – deter the experiencer from living it up to the hilt.

Ostentatious celebration of Durga Puja in Calcutta is traced back to the early 1700s when Bengal’s zamindars outdid each other in displaying their influence, power and wealth by spending large sums of money in festivities. From wrapping the idols of Goddess Durga in expensive silken sarees and decking them up in gold and silver jewellery to feeding hundreds of people for the five to six days, the extravagance however, had another side to it. Many of them were not just pious and religious but deeply spiritual and who pondered existential questions of the meaning of life.

“If death was inevitable” went the reasoning, “what then was the point of life?” The conclusion was that the meaning of life was to live it.

The idols of the Goddess were created from the clay from the banks of the holy river Ganges that flowed by the potter colony of Kumurtuli (kumur meaning pottery) in northern Calcutta. One of the earliest known zamindars to have celebrated Durga Puja was Gobinda Ram Mitra, an upper-class Kshatriya, who established the house of the Mitras of Kumurtuli.

The clay was shaped into the perfection – of form, of divine grace, of beauty. The eyes were said to have been created lastly…and the priest was required to mediate and chant mantras in order to invoke the Goddess to come down to earth and enter the clay form and give it life. Though often the eyes were made of diamond, the real test for the potter, priest and pious zamindar lay in whether they reflected the Goddess’s divine gaze.

And yet for all the focus on perfection, the detailing, the fuss over the form of the deity, She would have to go back to formlessness at the end of the tenure of the week.

Likewise, life must be lived to perfection. Even though it ended in death. Indeed, the first two to three days and nights of Panchami, Shosti and Saptami are filled with the promise of fun and fulfilment that lie ahead. New clothes come out in a burst of colors. Music, whether mellifluous or cacophonous, blare out in a heady orchestra, unconcerned like youth, to the effect it may be creating. The scent of fresh flowers and fruit offerings fill the air. The dazzle of flashing lights chases away dark thoughts of imminent transience.

But as the sun gets ready to set on Ashtami, Calcutta begins to slump into a depression. Ashtami, Old and Wise will now begin the descent into Nobomi and finally Doshomi. From dust Durga will return to Dust.

But as the heady revelers who lead the immersion processions chant, reassuring themselves, “ashchhey bochhor aabar hobby”.  (Next year, it will happen…all over again.) Like reincarnation…the Goddess will return to life again.