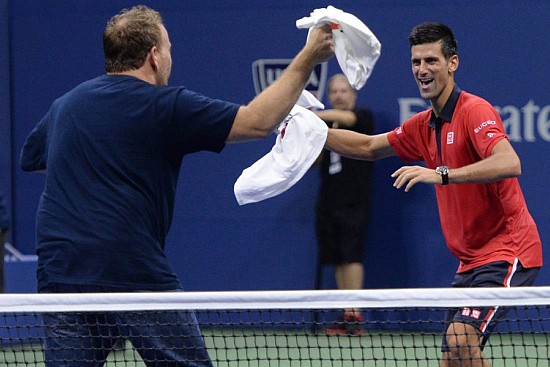 Novak Djokovic may be the world no.1 tennis player but not sure if the same can be said about his dancing skills.

However, the Serbian tennis star is never reluctant to show a few of his dance moves, every now and then.

So while celebrating his comfortable straight sets triumph over Austria’s Andreas Haider-Maurer in the US Open men’s singles second round, Djokovic did a little jig with a fan.

The pair performed a short 'gangnam style' jig, which ended with Djokovic high five-ing his partner and putting on an 'I love New York' T-shirt.

This is not the first time that Djokovic has got the world talking about his dance moves.

It was only in July 2015, that Wimbledon champions Serena Williams and Novak Djokovic danced together during a dinner celebrating their wins.

Djokovic clearly seems to have some special love for Gangnam style.

Back in 2013, he performed the 'Gangnam style' with Serena Williams during the Kids Tennis Day at Melbourne Park ahead of the Australian Open tennis championship.