'Death Of The Internet As We Know It' 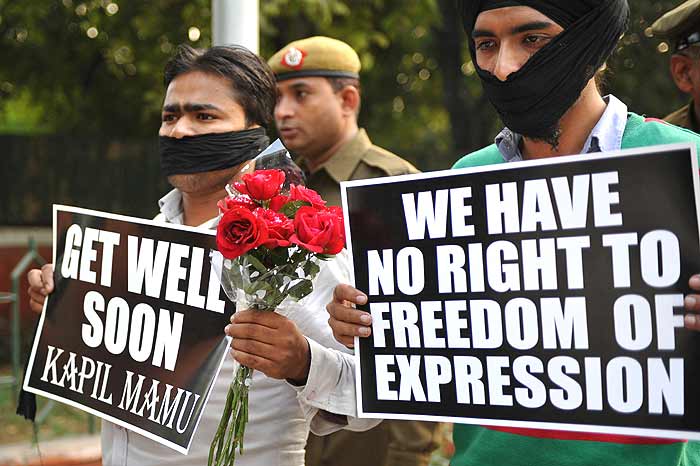 In their various pronouncements since the censorship controversy broke, Mr Kapil Sibal and Mr Sachin Pilot, the minister and minister of state respectively in the ministry of communications and information technology, have been vocally insisting that the government does not want to resort to censorship and believes in the constitutional right of free speech.

These pieties were once again repeated today by the two ministers after meeting representatives of social media companies, including Google, Facebook and Twitter, for what is now being spun as an "open dialogue to empower individuals and citizens" while reliable sources also reveal that their ministry "is mulling forming an inter-ministerial group to work out a mechanism to monitor and avoid uploading of any defamatory material on Internet."

At the Centre for Internet and Society (CIS) blog, Pranesh Prakash points to the government's patent insincerity because this sudden talk of 'transparency' and 'dialogue' came only after it was exposed in the press that the Department of Information Technology was holding secret talks with Internet companies.

He also underlines the clandestine manner in which the government wants Internet companies to 'self-regulate' user-uploaded content. One of the reasons for this arm-twisting is to prevent the sort of embarrassment caused by the Google Transparency Report which had demolished the government claims of wanting to curb "hate speech" or that affecting "religious sensitivities" as it tabulated that out that as many as 255 (71%) of the 358 complaints made to Google in the last six months, were about 'government criticism' and only 8, or 2.23% were about "hate speech".

With self-censorship, there would be no need for these requests for removal in the first place, nor will sites have to be blocked officially using the IT Act.

In the article we carried yesterday, Who Plays Judge, Nikhil Pahwa of Medianama provided a reasonable hypothesis about Mr Kapil Sibal's recent actions:

one of my fears is that something as draconian as pre-censorship may actually be used to make the IT Rules look justifiable, like something of a rollback. People will be furious about suggestions to pre-censor the web, but in comparison, perhaps be willing to accept arbitrary and opaque post-censorship, which is what the the IT Rules allow. The IT Rules need to be amended as well.

The CIS blog by Pranesh Prakash once again underlines what is wrong with these rules:

These rules, which were made by the Department of Information Technology and not by the Parliament, require that all intermediaries remove content that is 'disparaging', 'relating to... gambling', 'harm minors in any way', to which the user 'does not have rights'.  When was the last time you checked wither you had 'rights' to a joke before forwarding it?  Did you share a Twitter message containing the term "#IdiotKapilSibal", as thousands of people did a few days ago?  Well, that is 'disparaging', and Twitter is required by the new law to block all such content.  The government of Sikkim can run advertisements for its PlayWin lottery in newspapers, but under the new law it cannot do so online.  As you can see, through these ridiculous examples, the Intermediary Guidelines are very badly thought-out and their drafting is even worse.  Worst of all, they are unconstitutional, as they put limits on freedom of speech that contravene Article 19(1)(a) and 19(2) of the Constitution, and do so in a manner that lacks any semblance of due process and fairness.

CIs's draft report on the Intermediary Liability in India: Chilling Effects on Free Expression on the Internet 2011 looks at these rules critically. For the purposes of this study, takedown notices were sent to a sample comprising of 7 intermediaries and their response to the notices was documented.

The results of the paper clearly demonstrate that the Rules indeed have a chilling effect on free expression. Specifically, the Rules create uncertainty in the criteria and procedure for administering the takedown thereby inducing the intermediary to err on the side of caution and over-comply with takedown notices to suppress legitimate expressions. Additionally, the Rules do not establish sufficient safeguards to prevent misuse and abuse of the takedown process to suppress legitimate expressions.

Further, if such subjective determination is required to be done in a limited timeframe and in the absence of adequate facts and circumstances, the intermediary mechanically complies (without application of mind) with the takedown notice.

The results also demonstrate that the Rules are procedurally flawed as they ignore all elements of natural justice. The third party provider of information whose expression is censored is not informed about the takedown, let alone given an opportunity to be heard before or after the takedown. There is no recourse for the third party provider of information to have the removed information restored or put back if it does come to his knowledge. The intermediary is under no obligation to provide a reasoned decision for rejecting or accepting a takedown notice. There is also no requirement for disclosure or transparency in the takedown process.

These Rules and all this recent talk of 'self-regulation' are of a piece with the government's overall paranoia of the power of the internet and various whistleblower websites that are coming up (eg, consider the recent case involving corruptionindrdo.com). Because there are constitutional safe-guards against censorship, surreptitious measures are being adopted in a number of ways. As Prakash points out:

Mr. Sibal's latest proposed amendment to the Copyright Act, which is before the Rajya Sabha right now, has a provision called section 52(1)(c) by which anyone can send a notice complaining about infringement of his copyright.  The Internet company will have to remove the content immediately without question, even if the notice is false or malicious.  The sender of false or malicious notices is not penalized. But the Internet company will be penalized if it doesn't remove the content that has been complained about.  The complaint need not even be shown to be true before the content is removed.  Indeed, anyone can complain about any content, without even having to show that they own the rights to that content.  The government seems to be keen to have the power to remove content from the Internet without following any 'due process' or fair procedure.  Indeed, it not only wants to give itself this power, but it is keen on giving all individuals this power.

'A Failure Of Intellectual Argument'